Reog Ponorage dance is art culture tradition came from Ponorogo, East Java. Ponorogo is one of regency in East Java, located in west side of East Java, directly border with Central Java or 220 kilometers from southwest Surabaya, the capital city of East Java. Ponorogo known as City of Santri, because has many of Islamic boarding school, one of the famous is Pondok Modern Darussalam Gontor, located in Gontor village, Mlarak sub district.

There was five version about the history of Reog or Barongan, but the populer ones was about the rebellion of Demang Ki Ageng Kutu Suryonggalan, servant kingdom in Bhre Kertabhumi era in 15th of century. Bhre Kertabhumi was the last king in Majapahit.

Ki Ageng Kutu Suryonggalan had a big anger toward his king because of corruption in the government and the strong influence came from China, hometown of the wife of king Majapahit. He had a believe that soon or later the authority of Majapahit would be over, because of internal conflict in the kingdom itself. (See also : Indonesian Wedding Culture)

So, he decided to leave the king and set up a school or institution at that time. He taught self immunity knowledge, martial arts and life perfection knowledge, for young people. He had a big hope in his young troops that they were the candidate for new era of Majapahit resurrection.

On the other hand, he realized that the troops was too way weak and smaller than Majapahit army. So the political message from Ki Ageng Kutu can only be deliver by Reog Ponororogo art show. The Reog could be insinuation or satire way to express his feeling toward King Kertabhumi and his kingdom.

Reog Ponorogo dance show is Ki Ageng Kutu strategy to built local resistance use teh populaity of Reog Ponorogo. In Reog, there is performance from Lion Head Masked, usually called by Singa Barong, or king of jungle as the symbolized of King Kertabhumi.

On top of the head, there is feather of peacock plugged until resembled a giant fan, as a symbol of strong influence from China partner of the King, which is always controlled every action King did in the kingdom. (See also : Indonesian tribes)

Jatilan, or gemblak role riding the horses, symbolize the power of Majapahit that had contrast comparison between the power of warok. Meanwhile, the man behind mask in red clown figure symbolized Ki Ageng Kutu, support the heaviness of 50 kilograms lion barong mask with his teeth strenght by himself.

The popularity of Ki Ageng Kutu pushed Bhre Kertabumi take an action to attack Ki Ageng Kutu school. The rebellion soon can be cleared, but this makes school prohibited in teaching of knowledge to warok.(See also : Indonesian etiquette)

However, it turns out, Ki Ageng Kutu students still continue to study in secretly and stealthy way. Then, The Reog show not restricted to perform, because this show already became popular in society.

On the other hand, the story line have a new plot and added with new characters from Ponorogo folklore, among others Dewi Songgolangit, Kelono Sewandono,and Sri Genthayu. Until this day, Ponorogo people only followed the richness of their culture heritages. Reog Ponorogo was the creation from human in their hereditary belief and still preserved until now. (See also : Indonesian Landmarks)

The Character and Costumes 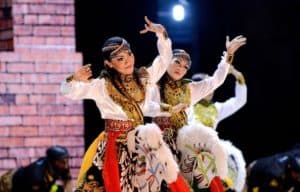 Jathil is the horse warrior or soldier in Reog show. Jathilan is a dance resembled agility of horse warrior doing their exercise on the top of horseback riding.

In the first time, Jathilan played by man with good looking faces and resembled pretty women.

The dance has a feminine  movements. But since 1980, the male dancer substitute with female dancer for the accomplished of feminine side reason. The characteristic of Jathilan dance tend to be smooth, attractive and flirtatious, and the dance rhythmic between mlaku (innocent rhythmic) and ngracik rhythmic changed alternately. (See also : Indonesian National Flower)

The property of Jathilan are : 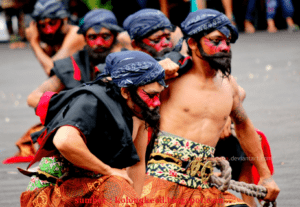 Warok came from Wewarah. It means people with carry on holy willpower, giving guidance and protection without ulterior motives.

Warok played by someone that have perfection in their life, have an ability to give direction about life in spiritual and motivation way.

Warok already established in their spiritual life and have a good intention among others. (See also : Indonesia Java)

Warok is an identity character of Ponorogo people and already became heritage from ancestor to the next generation. Warok is part of visual model of Reog and cannot be separated from the unity of Reog Ponorogo. Warok is someone that really mastering material and spiritual knowledge. (See also : Bali Facts)

The property of Warok are : 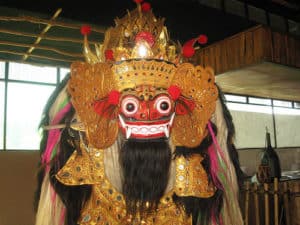 Barongan is one of dominated dance equipment in Reog Ponorogo. The part of Barongan consist of Tiger/Lion Head (caplokan), made of wood structure, bamboos and  rattan covered up with Tiger Gembong skin.

Dadak merak, made of bamboos and rattan as place of peacock feathers resembled a peacock spreading the feathers and bite chaplet. Krakap made of black velvet cloth embroidered with beads, as an accessories and a place to write Reog group identity.

Pembarong is main dancer in Reog Ponorogo and have a task to carrying out Dadak Merak with height one and a half metres. Pembarong wear long black pants and kimplong clothes (clothes with only have one pad shoulder). (See also : Saman Dance) 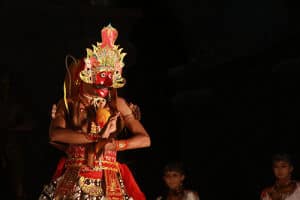 Klono Sewandono or King Kelono is a mighty king with his powerful weapon called Cemeti or horse whip. King Kelono or usually called by Kyai Pecut Samandiman always bring his whip to protect himself everywhere he go.

The attactive dance represent his bravery and prestige of the king. In one of the story line, King Kelono invented beautiful art creation from his intelligence as fulfill his lovers demand.

Because the king is in love so the dance movement portray someone that so deep in love. (See also : Bali Tribes) 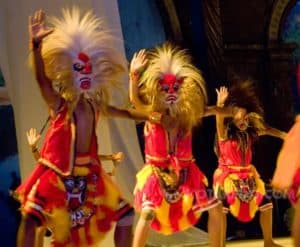 Bujang Ganong or Ganongan or Patih Pujangga Anom is one of energetic and comical figures also have an ability in martial arts.

His performances always be awaited with high anticipation specially by children.

The property of Patih Bujang Ganong are :

After opening dance end, the essential scene will be perform, usually the performance depends on in what condition or situation Reog will be held. If the event related to wedding ceremony, then the scenes will present romantic scene. If the event held for circumcisions celebration , then usually show the story of warrior or soldier.
The scenes in Reog not following standard scenario. And there’s always has an interaction between player and dalang (leader of the group). Sometimes player changed accidentally if there is one of the player feel exhausted. The more important things in Reog is how to give high satisfaction to the audience. (See also : Hinduism in Bali)
The last scene is Singa Barong scenes, where player use lion head mask with the peacock feathers crown. The mask weight is about 50 – 60 kilograms. And the player carried the mask with his teeth. The ability or Singa Barong player is came from tough and routine exercises and also spiritual behavior like fasting and meditation. (See also : Indonesian People)

Reog Ponorogo dance artists graduated from art school or instution give a final touch in development of Reog Ponorogo show dance. Art schools students also familiarize stage act aesthetic performances and choreographically scenes, and make Reog Ponorogo can perform in  festival kind of act.
There is storyline and who is the first perform and so on, that is Warok, then Jathilan, Bujangganong, Klana Sewandana, next Barongan or Dadak Merak in last scenes. When one of the component take an action, another component stay on their move but not to stand out.
Few years ago, The Reog Ponorogo dance foundation initiates Reog Nusantara Community which is the member came from Reog group from various region in Indonesia and had been contribute in National Reog Festival. Reog Ponorogo became more open because of the transformation in differentiation of variety of the acts. (See also : Dayak Tribe)
Controversy
The controversy of Reog arised when Malaysia has Tari Barongan also and claimed to be one of Malaysia Heritages by Batu Pahat Johor dan Selangor Malaysia. Indonesia against the claim because Reog Ponorogo copyright already registered with serial number 26377 in 11 Februari 2004 and known by Minister of Law and Human Rights. Thousand of Reog Artist held demonstration in front of Malaysian Embassy.
The conclusion, Malaysia Embassador of Indonesia Datuk Zainal Abidin Muhammad Zain in end of November 2007, gave statement that ” Government of Malaysia never claimed Reog ponorogo as original culture from the country”. In Malaysia, Barongan still can be found in Johor and Selangor, because of Javanese immigrant brought the art culture and perform in that town.  (See also : Indonesian Martial Arts)
Reog Ponorogo already had an established position in world art performances. Since 1973 taken part in World Expo in Paris in order to Art And Culture Promotion of Indonesia and even achieved Runner Up in Art World Festival in Tahiti. And never absent gave contribution and perform in World Expo since 1973 until 1996.
Unesco Stated
As a show, Reog Ponorogo reflected manifestation of Indonesian history and culture. And very deserved to registered as one of UNESCO World Heritages and hopefully we can received the good news soon. Developing in to one of main target art show in East Java and Indonesia, Reog Ponorogo had became truly Indonesian originally show that received a lot of love from local and international tourist. Hope we  can maintain the tradition and preserved Reog Ponorogo in to the next generation.
[accordion]
[toggle title=”Another Links”]

Top 20 Misunderstanding of Culture in Indonesia – Strategies to Prevent