Bali is one of the most well-known island in Indonesia for the foreigners. Most of the foreigners, in fact, only realize Bali is part of Indonesia few years after visiting Bali. The enchantment of Bali is indeed unbreakable. Bali has succeeded captivating the foreigners with their culture wealth. The tradition that always upheld in their daily life has become their own charm to the foreigners.

Among many traditions and culture Bali has, Balinese dance is one of the most awaited performance foreigners will like to see. Balinese dance is epic, dynamic and intensely expressive. It is part of the religious and magnificent expression of Balinese people. The most notable dance are those ritualistic dances. As well as dramas which involve the witch, Rangda, and the great beast Barong.

Although most of Balinese dance are connected to Hindu ritual, there are also dance created for other purpose that has nothing to do with religious ritual. Like Pendet dance which is simply a welcoming dance.

There are several kinds of Balinese Dance. Some of them are already well-known in world stage, Such as: 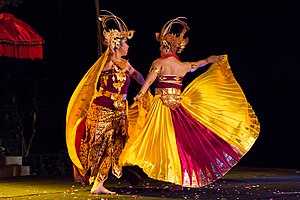 The dancers are dressed in Pandji-style headdresses with feathers stuck in them and flowing scarves or skirts with a pink stripe.

The first choreography of Cendrawasih Dance was arranged by N. L. N. Swasthi Wijaya Bandem in 1988.  The traditional dance has often being used to promote Indonesia culture outside of Indonesia. These countries include Peru in 2002, Washington, D.C in 2008, Japan in 2008 and the Netherlands in 2008.

According to the history, Trunajaya dance come from Buleleng, Bali. The dance illustrates the behavior of an energetic and emotional teenager who all of his doings are always to captivate a girl’s heart.

Trunajaya dance is one of those dance that has nothing to do with religious dance. It is included in the category of Balih-balihan dance or as entertainment dance.

Although the dance portray a life of  a young man, sometimes it is also performed by women. The name of the dance itself derived from “Teruna” which means a young man or pemuda in Indonesia.

Barong is one of religious spiritual activities in Bali, Indonesia. The Barong itself means bahruang which also means bear. This may explain why the appearance of the dance is look like a large body bears. It takes two males dancer to perform the dance;one act as the head while the other act as the tail. A well-known myth about Barong is that it take a shape Ratu Gede Mecaling, the faerie ruler of the southern ocean. It is told to be tall, black, and fanged—berstana in Pura Dalem Ped, Nusa Penida. It is believed that the lookalike statue of Ratu Gede Mencaling got ghost frightened. Ghosts are told to be Ratu Gede Mecalling’s minion.

There are many types of Barong dance, such as:

Kecak, also known as Ketjak, Ketjack in spelling, is a dance that tells the story of Ramayana and mostly perform by men. It takes tens or more  male dancer to perform. The dancers will be sitting in a big circle with a certain rhythm while shouting “cak” and raising both of their arms, depicting Ramayana tale when the line of apes helping Rama fighting Rahwana.

Beside the dancers that sit in the circle, there are also dancer who perform as characters from Ramayana tale such as Rama, Shinta, Rahwana, Hanoman, dan Sugriwa.

Kecak derived from sanghyang ritual—a dance traditions when the dancer was in an unconscious condition. It is believed that through this dance, God or the spirits of the ancestors convey their wishes to the people.  Wayan Limbak worked with a painter from German,  Walter Spies to create Kecak dance in 1930. Kecak dance created based on Sanghyang tradition and many part of the Ramayana tale.
See also: Best Airport in Indonesia – Indonesian Democracy

Pendet dance, at the very beginning is a worship dance to welcome the descending of dewata to the earth. As the time goes by, the artists of Bali change Pendet more into “a welcome greeting”.
Even so, pendet dance still contains the sacred-religious elements.
Pendet dance is one of Balinese dance that everyone can do, both men and women. It doesn’t need an intensive training in order to perform the dance.
Pendet dance usually performed after Rejang dance in the courtyard of temples and generally facing toward the sacred (shrines).
The Pendet dancers wear ceremonial dress and each dancer brings sangku, jugs, bowls, and other offerings fixtures.
See also: Bali Facts – Most Beautiful Fabric in Indonesia Renjang dance, known as ngeremas, Simi or sutri in some places, is a dance with a very simple dance movement, but progressive and agile. It is a dance from women for women. Usually, the performances of Renjang dance held at the temple. It done during ceremonial or Hindu Dharma’s religious ceremony course.
The dancers are dressed in a festive ceremony dress with lots of decorations, dancing with a march circling the temple or pelinggih which is sometimes done with a hand-grip hold. Pendet dance usually performed after this dance.
There are many types of Renjang dance, such as: Baris dance is a traditional war dances from Bali which perform together with gamelan.

Then, it describe the feelings of a young hero (soldier) before he went to war, hailed the virility of Bali’s heroes and show the stability of the leadership.

The Baris dance itself come from the word of baris in Indonesia, referring to the rows of the loyal soldiers of the king. According to historical records, the Baris dance estimated has been around since the mid of 16th century.

The Baris Dance perform by male. They wore a triangular crown decorated with seashells lined up vertically on top and wear a loose colorful costumes with the costume hanging down and rests on the shoulder. 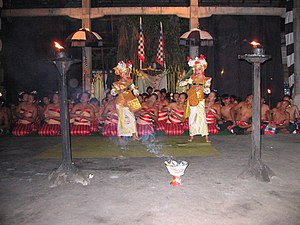 Sanghyang Dedari Dance is a sacred dance that is performed when the dancers are in a state of “kerawuhan” or possessed. Dedari itself means angel.

This dance is perform by young girl who haven’t through puberty or “akhil balik” since they’re considered still pure.

The ritual start with the dancers being sung slendro rhythm and pelog or gending (singing) of sanghyang Dedari. The dancers soon will close their eyes and pass out—this is means that they’re already possessed. In this state of trance, the dancers are being dressed in the form of coils, dance costume and kepet or dance fan. The dancers then carried with shoulder while continue dancing with the palegongan sanghyang and gamelan.

In November 29 to December 4, 2015, the Intergovernmental Committee for the Safeguarding of the Intangible Cultural Heritage convention was held in Windhoek, Namibia. At this moment,  UNESCO officially recognizes Wali (sacred dances), Bebali (semi-sacred dances) and Balih-balihan (dances for entertainment purposes) as Intangible cultural heritage.

These genres are represent its function and living tradition in Balinese community, such as:

The recognition enables Bali to receive protection in terms of traditional dance preservation and may help benefit the economic of Balinese. With this recognition, Balinese expected to stay true to their tradition and culture for as long as they can.