Dayak is one of native community in Borneo, Kalimantan Island. They still live there with so many maritime and nautical culture around. Then, Dayak itself has meaning related to most of river in this island. On the other hand, the name of Dayak comes from the word “Power” which means upstream. It usually for mention the people who lived in west and edge Kalimantan.

Then, the name itself given by Malays who came to Borneo. Then, Dayaks are Proto Malayan nation and one of the oldest tribes in Indonesia. Moreover, Dayak tribe dominates the island.

On the other hand, as well as other tribes, Dayak also has history, cultures and customs. Its exactly not the same with the others. Dayak cultures is a whole systems of ideas, actions, and results.

Then, all of them are included in context which adopted by the people for live in Dayak community. So, it means that customs and cultures already entrenched in daily life of Dayak tribe. However, the process is not from existence of biological heritage which developed, but through learning process which passed down.

In addition, Dayak cultures contain several forms. Such as :

Around 3000-1500 AD, when Asia and Kalimantan were still joined, there are movement of people from Yunnan massively. Then, the Chinese from Yunnan entered Kalimantan in Ming Dynasty between 1368-1943. The main purpose of migration was trade. In every way, Chinese people trade the goods such as silk, opium, even Chinaware likes cups, bowls, plates and other ceramics.

On the other hand, along with the entry of Chinese in mainland, there are two groups which entered later. Namely negroid and Weddid which popular as Malays. Then, both groups eventually coexist and settled in Kalimantan. From only come for trade, it happened with some engaging through marriage. Children from the marriage of two groups eventually become Dayaks. Thus the engagement between two cultures, their children’s face looks very oriental. They are similar like Chinese children which has Slant-eyed and fair-complexioned.

Then, engagement continued to occur. Both of male and female of Dayak married to fellow locals and creates pure Dayak tribe. As well as married to descendants of the Chinese who settled in area. The result of mixing it eventually spread to almost all regions in Kalimantan. That’s why, the combination makes Dayak girls look prettier than the actual Chinese girl. They looks more exotic.

Then, most Dayak community immediately embraced Islam as one of Indonesian Religion, and no longer recognize themselves as Dayak. It because the mystical world of the Dayaks were so strong so contrast to Islam literature. Therefore, Dayak Muslim called themselves as Malay or Banjar.

Dayak tribe is divided into two groups. There are Dayak Muslim and Dayak non Muslim. Then, there are several Dayak Muslim tribe, Such as Dayak Sampit, Dayak Paser, Dayak Bidayuh, Dayak Melanau, Dayak Sintang, Dayak Embalong, and more. While Dayak non Muslim such as Dayak Abai, Dayak Bakati, Dayak Bidayuh, Dayak Kenyah, Dayak Mayau, Dayak Mualang and others up to three hundred of sub tribes. However, here we give fact of the most primitive dayak tribe called Dayak Punan.

Among sub tribes of Dayak, Dayak Punan is the most primitive tribe than others. Dayak Punan spread around Sabah and Sarawak, East Malaysia which part of Kalimantan island. The population is up to 8,956 people scattered in 77 settlements.

On the other hand, the tribe is still not even change and obey the customary of their ancestors. The tribe is one of tribe which difficult to communicate with general public. Moreover, most of them live in dense forests or in the cave. That’s why, they are still live in conservative ways.

The customs is one of Indonesian cultures heritages. Then, there are some Dayak customs are still preserved until now. Such as:

1. Tiwah Ceremony: Tiwah ceremony is one of sacred event of Dayak tribe. It delivered the bones of corp to Sandung. Then, Sandung is a sort of small house for keep those who died.

2. Supernatural Power: There are several supernatural power. One of them is Manajah Antang. It uses for finding the existence of an enemy that is difficult to find. Wherever the enemy in the search will be found.

3. Mangkok Merah: Symbol of Dayak unity. Its supply when they feel their sovereignty in danger. Then, Pangkalima Dayak, give a signal to alert the people using Mangkok Merah to all villages.

4. Funeral Tradition: The gong sounded as sign of someone was dead. Then, exactly at midnight, corps placed in Rarung, wood coffin along with a sound of gong. There are several figure to lead the process such as Wadian, Pasambe, Damang, and families. Each of them has their task. Pasambe prepare all the needs and supplies for corps and Wadian gives an guidance for corps as well as its foods.

5. Tanam Padi Ceremony: This ceremony is worship symbols. They pray to hope all the planted fields can obtain abundant results of harvests.

6. Thanksgiving Ceremony:  It usually held after the harvest season comes. Dayak community will do celebration according to traditional ceremony of Erau and held once in a year.

The forms of Dayak arts can not be separated from sociological history. Its starting from a primitive society which embraced Animism-Dynamism. Then, it growth to mixed with Javanese and Chinese arts. 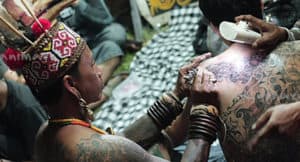 It can be seen in sculptures dominated the local ornamental motifs. Then, the characteristics of nature and spirit of the gods lays on it. As well as uses for traditional ceremonies.

There are various sculptures with a variety of functions. On the other hand, the painting of Dayak also be applied in the human body. Tattoos Dayak became very famous. Tattos for several Dayak community can not be separated from their life.

Its something sacred related to several purposes and become a cultures. In addition, Each of Dayak tribe has different patterns of tattoos. Meanwhile, Shape and images of tattoos generally taken from natures. Such as Enggang bird which represents the end of the world, frogs as representative of underworld, other natural motif from flowers, leaf and more. 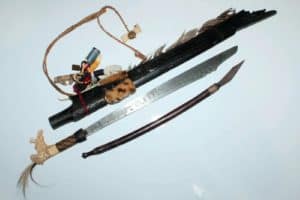 There is a main weapon which often used by Dayak tribe. It called Mandau. Mandau  has its original name “Ambang Birang Bitang Pono Ajun Kajau”. The shape is long and usually has a good craft both of inlay or ordinary crafts.

Then, Mandau made from basalt, then carved and engraved with a gold, silver, and cooper.

Moreover, it has a religious value which well cared by Dayak people. On the other hand, the making process of Mandau often used Rocks. Such as Sanaman Mantikei, Tengger, Mujat, and Montalat.

On the other hand, even though there are no danger or war, Dayak men usually brings Mandau as a precaution. However, there are rules to using Mandau. Mandau can not be out from its cover randomly. Its believed if Mandau out randomly, there will be person died.

Then, there are several weapons from Dayak tribe. Such as:

[tr][td]E[/td] [td]Leleng[/td] [td]This dance tells a girl named Utan Along which forcibly married by her parents with a young man who did not love her.[/td][/tr]

a. Garantung: Gong which believed for communicate to ancestors.

b. Gandang: It often uses for guest welcoming ceremony.

c. Katambung: The percussion which played in sacred ceremonies.

The cultures of Dayak Tribe is one of national cultural wealth. It has been passed down by ancestors of Dayak tribe which formed between personality and characteristic that maintained until now.