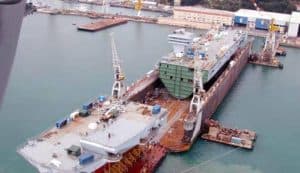 The shipyard is a place designed to repair and make ships. These ships can be in the form of cruise ships / yachts, military fleets, cruise lines, freight planes or passengers. Countries with the ability to build large shipbuilding industries are: South Korea, Japan and the People’s Republic of China. The shipbuilding industry in Europe is more divided than in Asia.

The establishment of PT PAL INDONESIA (Persero) originated from a shipyard called Marin Establishment (ME) and was inaugurated by the Dutch Government in 1939. During the Japanese occupation, the company changed its name to Kaigun SE 2124. This as one of the strategic industries that produce the main tool of the Indonesian defense system, especially for the maritime dimension, its existence certainly has an important and strategic role in supporting the development of the national marine industry.

Currently the design capabilities and quality of this company have been recognized by the international market. The production vessels of PT PAL INDONESIA have been navigating international waters around the world. As a shipyard company with more than three decades of experience, PT PAL INDONESIA and 1,300 personnel have mastered the development of a variety of quality products.

The next famous shipyard belongs to PT Dok and Perkapalan Surabaya (DPS). This is a state-owned company engaged in shipbuilding and is the result of nationalization from the Netherlands.

DPS has 4 floating docks, which can accommodate vessels up to 290 m in length and approx. 135 000 dwt. We also have the possibility of repairing ships up to 310 m long along the shipyard dock. Our dock has a length of about 6000 m, including 3500 m from the dock equipped with basic infrastructure, electricity supply and technical gas supply. 24 cranes can lift up to 300 t.

With more than 40 years of experience, PT. Daya Radar Utama has become one of the best shipyards in Indonesia. It is proven from the ability, commitment to provide the best service and focus on the quality and the right delivery time. After experiencing difficult years of 35 years in the shipping industry, this company has managed to offer optimal efficiency and flexibility in order to provide good results in terms of cost and time.

Established in 1972, this company has built and repaired various types of steel, aluminum alloy and fiberglass reinforced plastic vessels. The New Building Division was able to build ships up to 6500 DWT while the Repair Division is able to repair ships up to 8000 DWT.

In 2009, the company earned revenues of Rp.494.2 billion. The revenue came from the construction of a new vessel of Rp 76 billion, maintenance and repairs of Rp 339 billion, and non-ships Rp 68.5 billion. The net profit earned by the company last year was Rp 21.99 billion.

The next large shipyard is owned by PT Karimun Sembawang shipyard located in Karimun Islands. This is a shipyard wholly owned by PT. It already operates from a 30.7 hectare site located on Karimun Island in Indonesia, about 40 km southwest of Singapore.

Moving to complement the Singapore Group’s operations, the main yard activities include steel work, steel structure fabrication and the construction of multi-purpose barges / vessels for accommodation, work and bulk cargo. In addition, other activities include tank cleaning, repair of floating vessels, sand blasting and painting, as well as de-sludging and de-sloping of tankers.

Since its establishment, PT. Dumas has built many ships that not only meet the needs of the local market, but also demand the global market. The quality and timeliness of their work has caused PT. Dumas is working as an operational partner for Damen Shipyard Gorinchem (Netherlands) to help them build new ships for international demand.

PT Waruna Nusa Sentana was originally established in 1990. Since its establishment, Waruna has developed into a shipyard that has one of the largest Dry Jetty in Indonesia, with a capacity of up to 100,000 DWT. The company is known for its unlimited experience in repairing various types of ships. The company located in East Jakarta also operates a subsidiary business such as shipping and shipbuilding.

With its vision to become a National Heritage in Shipowners and Shipyard Businesses, Waruna and its people share the same common goal to provide the highest level of customer service and reliable transportation services. They are also committed to continuously evolving to improve our performance and find satisfaction in providing the best solutions to your business problems.

Those are the biggest shipyard in Indonesia. After reading all above passages, now you realize that Indonesian marine is extremely wonderful. That is why many shipyard companies established in Indonesia.

10 Types Of Pythons in Indonesia that People Are Unaware About