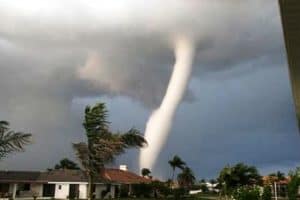 In its geographical location, Indonesia is on two continents that causes the west and east monsoon winds to blow. Therefore, it is not new to Indonesia to face major winds. One of the big breezes is a typhoon.These are the lists of worst typhoon in Indonesia you might need to read.

Meanwhile, the victims of a tornado that devastated 111 houses in Medan Deli Sub-district were repairing damage. They use materials that can still be used. The residents hoped the Medan city government would immediately distribute aid to ease the burden. A whirlwind that swept through the residents’ settlement took place very quickly when it rained

Typhoon was reported to have occurred in three villages in Langka, North Sumatra in May 2012. A total of 217 houses were destroyed in this disaster. The hurricane hit the villages of Sei Lepan, Babalan and Brandan Bara. The typhoon also destroyed 34 houses and three school buildings in the Gunung Toar sub-district, Kuantan Regency Singigi, Riau.

This wind lasts for 30 minutes and occurs in the afternoon. Losses reached billions of rupiah, but luckily no victims died. Until now this location was reported to be frequent high winds. The government has urged residents to remain vigilant when rainy and windy weather hits the area.

Typhoon also happened in Waru Subdistrict, Sidoarjo Regency, East Java, Friday at the beginning of February 2018. As a result, dozens of residents’ houses were destroyed.

Some roofs of the house were badly damaged. Not only that, a place to study for Islamic people in the local hamlet was also hit by wind and suffered damage. According to residents, the swirling wind originally came from the south. The wind came from the direction of the Deltasari Indah housing and then to the village. No more than 10 minutes, many roofs of residents’ houses were flying.

A typhoon swept the Pangandaran Regency area in October 2016. Hundreds of houses in Parigi District were damaged. Meanwhile, one resident was allegedly killed by lightning. A whirlwind hit the Parigi District, one of them in the village of Kalangjaladri.

In addition to damaging homes, some residents also suffered injuries. When a tornado occurs, weather conditions are in heavy rain. This makes many fallen trees hit by the wind. The fall of the tree happened to a number of residents’ houses. A tornado also hit three hamlets namely Bojongsalawe, Astamaya, Buniayu.

At the end of 2017, a major hurricane struck the Pemalang region, Central Java. As a result, around 100 houses were damaged and dozens of residents were injured to receive treatment at a local hospital. The whirlwind hit 4 villages in Pemalang District namely Bojongnangka Village, Tambakrejo Village, Kebondalem Village and Bojongbata Village.

However, there were no casualties from the events that occurred in the afternoon. As a result, as many as 50 people were displaced because their homes were damaged by a tornado in Pemalang, Central Java. The tornado that hit 4 villages damaged 182 people’s homes and caused material losses caused by this disaster to reach Rp. 2,070 billion.

In October 2017, Indonesia was shocked by the appearance of video of strong winds on the Thousand Islands. A tornado typhoon in waters or waterspouts appeared in the Thousand Islands this morning. The appearance of three waterspouts together is called rare. This is a rare phenomenon, three tornadoes lined up simultaneously. Especially in the tropics this phenomenon is rare. This further shows that the climate has changed due to the destruction of the environment and the balance of the earth system.

This phenomenon occurs near Opak Island, behind Kaliage Island, which is an uninhabited island. There were no fatalities and damage to buildings. This phenomenon usually occurs during the transition season. The presence of contrasting temperature differences between land surface, water, and atmosphere causes a difference in air pressure to form a tornado.

Video of tornado sightings in the sea of Cirebon, West Java, became viral on social media (social media). The appearance of the devastating tornado vortex occurred in November 2017. The events that took place in Laut Cirebon were natural phenomena of tornadoes. It’s a typhoon.

The whirlwind was caused by low altitude cumulonimbus clouds. Support for the surrounding environment, according to him, is another factor. Such as lower air pressure and significantly lower air temperature. Video of Cirebon tornado sightings in the sea becomes viral on social media.

Eight regions in Indonesia in early 2018 were hit by a tornado in a relatively same time. Based on data from the National Disaster Management Agency (BNPB), the eight regions included the Thousand Islands, South Jakarta, Situbondo, Kediri, Blitar, Malang, Sukabumi, and Indramayu.

This strong-centered wind is caused by the influence of the center of the low pressure system in the southern waters of East Nusa Tenggara. This wind also hit Puau Seribu. Disasters on the two islands caused at least 35 injuries. Not only that, 459 houses and 4 schools, as well as other buildings such as mosques and health centers in the area that were hit by the wind, also suffered mild to moderate damage. The strong wind that formed this vortex was also said by Sutopo causing 60 trees to fall, 20 electric poles to collapse.

Those are some lists of worst typhoon that had ever happened in Indonesia. They would not be big as typhoon in Japan, Myanmar, or China. It is because Indonesia is a tropical country that is safe from big wind disaster like this. However, you need to take a good care of yourself while visiting Indonesia.