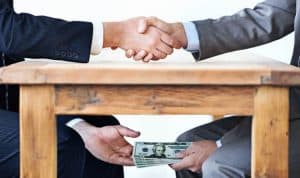 At least from 2001 to 2012, Indonesia has lost 168 trillion of corrupt money. If divided annually, at least Indonesia loses 13 trillion dollars every year. Of course this is not very little money. Though that much money is very possible for the welfare of the people of Indonesia. Unfortunately, not all the money from the corruption is returned. From UGM research, only 8.9 percent of the money can be returned annually. That means there are 11 trillion that are truly lost and not saved.

With corruption cases in Indonesia that are quite chronic, how many countries are there rated? From the data gathered by Transparency International which was recently released. Indonesia is ranked 90th out of 176 countries in the world.

For the most corrupt country in the world currently occupied by Somalia, underneath there is South Sudan and in the three most corrupt countries there is North Korea. While the cleanest country of corruption in the world is Denmark, second place is New Zealand and third place is Finland. Well, it is expected that Indonesia’s corruption eradication rate will improve soon and people’s welfare will also increase.

Corruption has always been a hot topic in Indonesia. Not just for media consumption. But conversation is commonplace in every corner of Indonesia. Everyone starts to talk about the corruption in a roadside coffee shops to coffee shops in five-star hotels.

The Corruption Eradication Commission of the Republic of Indonesia (commonly abbreviated as KPK) is a state institution that was formed with the aim of increasing the usability and results of the efforts to eradicate corruption. KPK is independent and free from the influence of any power in carrying out its duties and authorities.

The Indonesian Center for Law and Policy Studies states that the death penalty for corruptors will not be effective in reducing corruption in Indonesia so that it is not a good solution. The problem of corruption according to him is actually not only a personal problem but also a system that forms a person becomes corrupt or commits a crime of corruption. There are still many regulations that currently open opportunities for corruption such as regulations on the procurement of goods and services, so this needs to be evaluated by the government.

Corruption in Indonesia is not only done by individuals. Perhaps they were indeed arrested alone, but there was a strong system. He has a lot of strong people to make him able to do corruption on a very large scale. Besides that they also worked very neatly until there were parties who were appointed as executors and also those who were willing to sacrifice their bodies.

This means that if they are found they are willing to be arrested and silent if interrogated. That way the root of this system will remain solid. Suppose the person captured by a branch. One broken, there will still be another branch. If law enforcement is able to capture the root of this system, corruption in Indonesia can be handled well.

The next surprising fact is that when a corruptor is in prison, he can still get special services. How come? For example, Sukamiskin Lapas officers in West Java have been arrested for allegedly providing “luxurious” facilities for prisoners who are able to pay comfort while in prison. The notorious Sukamiskin penitentiary institution is a special prison that holds former high-ranking officials and businessmen who prove corrupt.

The rooms with air conditioning, television, large refrigerators, and private bathrooms sound more like the pictures of hotels than prison cells. However, at Sukamiskin Prison in West Java Province, prison guards allegedly provided various luxury equipment to wealthy and strong-placed prisoners, who reportedly paid between $ 19,000 to $ 35,000, or around Rp. 275 million to Rp. 506 million, to get special services. Some prisoners even receive their own cell keys and can go in and out as they want.

In fact, even at the RT RW level, corruption has become a common thing. Even though the funds which are undermined are indeed very small, they are still detrimental, for example illegal payments in making ID cards / domiciles.

Bribing is something that has become a habit that grows in Indonesia. From the smallest thing, to the big one, the Indonesian people seem to be difficult regardless of the word bribery. Even for affairs of population data, taxes, education, employment, or even other crucial things. If you have ever read the news in Indonesia, there have been reports of bribery.

For example, if you want to go to school X, but you don’t have enough intelligence to compete in the selection process, you might be able to contact the person and offer some money so you can join school X. It’s like that all you can buy with money . Although not all agencies want to accept bribes, it seems like this is common in Indonesia.

Those are some facts of corruption in Indonesia. One thing that is highly coveted is that people must not do corruption anymore because there are still many tragic events that make us supposed to think a thousand times not to corrupt. There are more than 5% of the Indonesian population who have to struggle to live below the poverty line.

12 Things To Do in Bali For Bachelors

Best Snorkeling in Bali Indonesia – The Exclusive Locations You Should Visit