10 Types Of Pythons in Indonesia that People Are Unaware About

Hearing the name of this type of reptile does make a shudder. How does history say that snakes are one of the most dangerous animals in the world. Its body that resembles a hose, scaly, slippery and able to attack with the blink of an eye with deadly poison makes humans rarely approach or even avoid this one animal. In fact, most humans will kill the snake when they meet. The following types of snake species are feared because the toxins produced can kill their prey very quickly. Read also rare animals in Indonesia.

Snake is a reptile that has no legs and long. Snakes are one of the most successful reptiles in the world and many are interested in raising snakes because snakes are also one of the pets that attracts the attention of pet lovers. There are so many types of snakes.

There are snakes that are venomous and deadly, and there are also snakes that are not venomous, and viewed from different lives, like snakes in the waters, they always prey on fish, frogs, tadpoles and other animals in the water. There are also animals that are always in the trees they always prey on birds and other animals that live in the trees as well as land. One type of snake that is widely found in Indonesia is python.

Sanca is known to spread widely in Africa, Asia and Australia; some pythons are known to be the longest snakes in the world. Commonly known as pythons in English, or often referred to as pythons in Indonesia. Although in general the public knows the types of pythons as non-venomous snakes, in fact at certain levels there can still be content in the saliva.

Here are 10 Types Of Pythons in Indonesia :

Who doesn’t know batik? Batik is a fabric with a pattern that is typical of Indonesia.

This python is called reticulated batik because it has a patterned skin like batik. Reticulated pythons are scattered throughout Southeast Asia.

In Indonesia, this python is found on the islands of Sumatra, Sulawesi, Nusa Tenggara, to Maluku.

The reticulated python is very long so it has been named the longest reptile in the world, reaching 8 meters in length.

Bodo is one of the most phenomenal pythons. Its habitat is now spread in Sumatra, Java, and Bali.

Bodo Phyton is actually more difficult to find in forests that are their natural habitat.

This python from Indonesia actually became an invasive species in the United States. This type of python is widely traded so that its status according to the IUCN is “Vulnerable”.

This type of python is found in Sumatra. Its body is short and the maximum is around 3 meters. But its python tends to be fat.

Its main characteristic is a reddish body color, resembling blood. This snake is also often referred to as a blood rice snake. 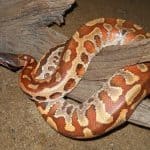 This species is also found in Sumatra and has a short body like Pongersmai. The difference is, the color tends to be darker.

Black blood sugar is also one of the targets of animal skin traders because the color pattern is attractive for the basic ingredients of bags, shoes, or other accessories. 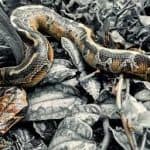 This type was previously considered a species with the Python curtus. But finally separated. This snake is endemic to Borneo and has a dominant color of chocolate.

By local residents, snakes that will not be more than 3 meters are often called ripung or lipung. You may see also animals in Borneo Indonesia 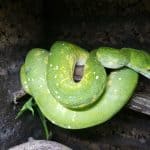 Unlike the types of pythons in general, which are dark in color, green pythons are bright green.

Green color is useful for disguising this snake as leaves or trees. You may also find blue, white and yellow dots all over its body. These not-too-large species are found in trees. In Indonesia, you can find lots of it in Papua. 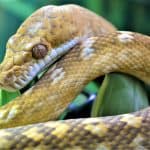 The characteristics of this species are light brown in color.

As the name implies, many Maluku pythons are found in the Maluku region. It’s quite long, around 8-9 feet. Normally, the skin of newborns will look reddish then it turn back to its original color when they grow. This giant snake can prey on buffalo even human. 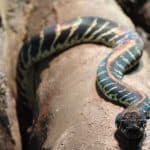 This type of python has a blackish body color.

Adult body length can reach about 3 meters. This species preys on small animals.

A month in the mountains of Papua at an altitude of more than 1,750 meters above sea level. See also Papua Culture 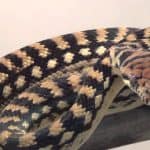 Gemstones can be up to 8.5 meters in size but this is rarely found.

Generally, the python has a length of 5 meters. His body was covered in bright scales resembling gems. These pythons can be found in Papua. Usually, they prey on huge mammals and rodents. Their maximum longevity is 13,8 years and normally people also called them scrub python. 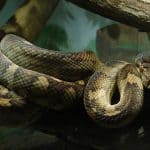 This type of python is almost similar to a python but spread in different regions.

Halmahera pythons are spread only in the Halmahera region including Ternate, Tidore to tanimbar. It’s quite long, ranging from 2.5 to 4 meters. People are often hard to distinguish this snake from boa. Uniquely, this snake could change their skin colors the fastest among other snakes. You may see also native animals of Indonesia 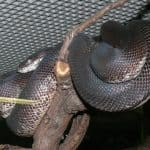 Just like gems, this type of python is found in Papua.

The main characteristic is the white part of the eye.

The white eye is only 1.5 meters long, so it is called the smallest python in the world.

This species usually prey on mice and animals of medium size. 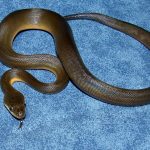 It is called a rainbow python because the body color of this snake will resemble a rainbow when exposed to light.

The original color of the rainbow python is brown.

This snake is active at night while during the day this snake usually hides in vegetation or near the river. Rainbow python is found in Papua.

15 Things You Should Never Do in Bali