The wealth of marine fauna in Indonesia is widely known throughout the world, one of which cannot be missed is the type of shark in Indonesia. In fact, most types of sharks in the world are in Indonesian waters because of the suitable environmental climate for breeding and their strategic location between the Indian Ocean and the Pacific Ocean.

Of the 500 species of sharks in the world, 200 of them are in Indonesia or around 40% even though those that have now been identified are 120 species. So this of course requires our responsibility which is also great in preserving sharks. With that amount Indonesia’s responsibility to ensure the sustainability of the population of various types of sharks is increasing.

Blackteep Reef Shark is one species of shark that can be easily recognized by the presence of black at the tip of the fin. These sharks are often found swimming on sandy beaches, although in some findings, these sharks can enter mangrove forest ecosystems and brackish waters.

They are often found living in shallow waters with depths of less than 10 feet. In some places, even these sharks are often found swimming in water as high as 30 cm. Some notes also found black fin sharks in waters as deep as 75 meters. It lives on sandy beaches with coral reef ecosystems around it. This shark can be found individually or in a small group. Black fin sharks are spread along shallow coasts in the Indian and Pacific Oceans, ranging from South Africa and Madagascar, the Arabian Peninsula, India and Maldives, Southeast Asia, Northern Australia, and the Pacific Islands. 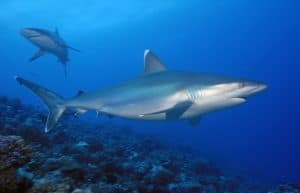 The Whiteteep Reef Shark (Triaenodon obesus) is one type of shark. This type of shark breeds in a viviparous way. The IUCN has assessed the reef shark as a fish in the Near Threatened category, noting that the number is getting thinner due to an increase in unregulated levels of fisheries throughout the range. Slow reproduction rates and limited habitat preferences of these species make populations vulnerable to over-exploitation.

It is usually of medium size with an average length of about 1.6 m. Coral sharks are close relatives of the Sonteng Sharks, Spotted Sharks, Black Fin Sharks and Black Fin Coral Sharks. This is a fish that spends time at the bottom of the waters or in the cracks of clear water coral reefs. This fish is a predatory fish and its habitat is in the water depth between 8 – 40 meters.

Each type of shark has its own swimming rate which forms a typical pattern with a certain swimming rate. Judging from the lateral aspect, the shark swimming pattern is categorized as horizontal wriggle amplitude. 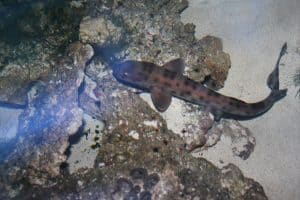 The shark, which was just discovered in 2005, is also a type of shark that is favored by sea hobbyist fish hobbyists. However, the spread of this fish is very limited because this fish is an endemic species of Bali Island.

The pressure that comes from catching into ornamental fish and the condition of the waters that are starting to be polluted by garbage make the protection of this species and its ecosystem a breakthrough step to prevent the sustainability of these fish. IUCN categorizes these fish into Vulnerable categories. 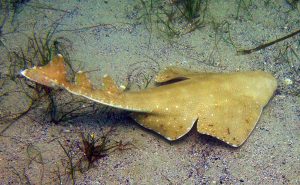 Sharks that are probably more like rays are actually real sharks from the Squatiniformes order. Although named “Indonesian”, in fact this fish is not spread throughout Indonesia, but only limited to the deep waters around Java, Bali and the Lesser Sunda Islands.

The existence of these fish is only known through by-catch data from fishing vessels that use nets or deep sea longlines, no wonder why IUCN categorizes these fish into the Data Deficient category. 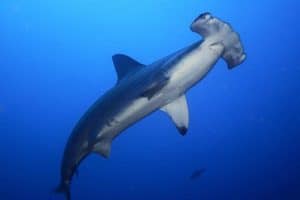 Hammerhead Shark (Sphyrna mokarran) is the largest species of hammerhead shark from hammerhead sharks, which belongs to the Sphyrnidae family. This shark can be found in tropical warm waters around the world. Its habitat covers coastal areas to continental shelf. he was a high-level, solitary predator, and a large hammerhead prey on crustaceans and cephalopods, fish, turtles, and even smaller sharks.

Observations of this species in the wild show that the function of its hammerhead is called a “cephalofoil” to paralyze its favorite prey, stingrays. Although potentially dangerous, large hammerhead sharks rarely attack humans. This shark is in great demand because of its large fins, which are very valuable in the Asian market as the main ingredient of shark fin soup. As a result, large hammerhead populations have declined worldwide, and have been considered Endangered by the International Society for Conservation of Nature (IUCN). In Balinese, this shark named as Hiu Capil.

This type of shark has many names. He was named Latin Carcharhinus Amblyrhynchos. Indonesian people know it as Lonjor shark, Merak Bulu (Lombok), shark lanjaman, or cone lanjaman (Java). Oblong sharks are often seen in coral reefs, near the reefs, or atoll reef boundaries.

It likes to twist and hide on the reef. The oval shark also enjoys swimming off the coast on the surface of the water to a depth of 280 meters. In Indonesia, we can find oval sharks in eastern Indonesia, the Indian Ocean and the South China Sea.

This shark has special characteristics, such as the black tail edge of the tail fin extending, the lower end of the pectoral fin is black, there is a prominent stroke between the dorsal fin which is not very clear. This shark can develop to a size of 70-230 cm.

Indonesian Greeneye Spurdog usually found off the coast of Bali, Indonesia. There is not much information about this species of animal. They like to eat some small invertebrate creatures on the sea. This kind of shark can grow up to 52 cm long with males maturing at 43 cm. While for livings, they prefer to stay at the holes and crevices on reefs as like most Catsharks do so.

The population of this shark starts to decline year by year. The fisherman usually catch this kind of shark in Jembrana, Bali. Then they dry the shark to make the dried fish.

Thresher Shark is a pelagic species, inhabiting both coastal and ocean waters. This shark can be easily identified because it has the characteristics of a long upper caudal fin or almost along its body. Curved head shape between the eyes, there are no deep grooves on the nape of the neck. This shark has my eyes slightly wide, its position almost in the middle of the side of the head.

Thresher Shark is the highest trophic level predator with a type of food consisting of small fish and squid. The spread is very wide in tropical and sub-tropical waters in the Indian Ocean and the Pacific. This shark is listed on the IUCN Red List, which means it needs serious attention to avoid the threat of extinction.

In Bali, this animal is known as the Mungsing and in Java it is known as the lanyam shark. In Denpasar BPSPL observation at Tanjung Luar Port, this shark dominates the catch of shark fishermen, which is 30%.

This shark is a pelagic type and is most often found near the edge of the continental shelf to a depth of 500 m or more in the epipelagic zone. Usually has around 6-12 children every one or two years. This shark grows in size 215-225 cm (male) and 232-246 cm (female) and can reach a total length of 350 m. Distribution in Indonesia includes the Indian Ocean, Sunda Strait, Makassar Strait, South China Sea and Banda Sea

Those are kinds of shark in Bali. There has been a case that a tourist was biten by a shark when he surfed in Bali. It can be a lesson for those who love to surf in Bali. Some shark there might be so aggressive.