Home » Art » Music » Get to Know About Gamelan, An Authentic Sound From Indonesia 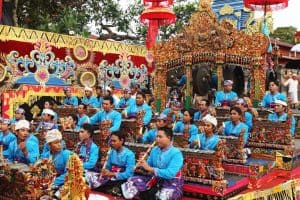 Gamelan is a widely known traditional music originally coming from Indonesia. Specifically, it’s originally from Java. Some other region may have different version as well, but Gamelan is more popular in Javanese region.

Gamelan now is not only taught in Indonesia, but also in few foreign countries as well. As the mission to introduce Indonesian culture worldwide, government often pushes Gamelan to perform in International festival and making it a curriculum in some international universities.

However, there are some interesting facts about this ancient musical instrument. Here they are:

It’s believed that Gamelan was only one big instrument called Gong. Time to time, people began to add multiple and smaller Gong that we can see nowadays.

Javanese people believes that Gong is created by God that ruled Javanese island at that time, Sang Hyang Guru who lived in Mahendra Mountain, or nowadays we call it Lawu Mountain. In The Guru’s era, a Gong is used to communicate and call other Gods. In order the message to be more precise and clear, it was made a specific Gong that becomes a primary example to what we call Gamelan today.

There’s also another version from relief of Borobudur Temple. It’s believed that Javanese society began to recognize Gamelan from 8th century. In the relief, there are several musical instruments such as Kendang (drum-like instrument), bamboo flute, Kecapi, Dawai, and a bell. It’s estimated that in the Hindu and Buddha era, Javanese people were introduced to Gamelan.

Then, in the Majapahit Empire era (1293 – 1500), Gamelan had been spreading fast. Even they could influence the use of Gamelan in Java, Bali, and Sunda. That’s why there are different version of Gamelan between those three regions due to its difference from cultural and social background.

It’s essential instrument in Gamelan. Most of Gamelan has this instrument. Its role is to organize the rhythm among other instrument. This instrument doesn’t use extended device such as a stick to play. It uses human’s hand and usually a person use their instinct and intuition to play it and set the rhythm.

This instrument role is to open the ensemble. It has two type Bonang Barung and Penerus. Bonang Barung has medium size, allowing the middle octave to higher octave to play. While Bonang Penerus’ role is to follow the rhythm of Bonan Barung to give richer sound of the performance.

This is also essential part of Javanese Gamelan. It has small size and consists of seven bars that produce different sound depending on the scale. It uses stick to beat the bar and other hand hold the beaten bar in order to not producing resonance. The speed of its play depend on the rhythm set by Kendang player.

This instrument’s role is to set the harmony and chord. It sets the boundaries of each play and strengthen the rhythm. This instrument is played by beating it using a stick that’s tied by fabric.

Slenthem is a gamelan instrument that consists of piece of thin metal that’s tied together with rope. It’s stretched out over a block of woods. It produces low resonance that follows Saron and Gender’s sound.

Gender is a metal based musical instrument that has 10 to 14 thin metal made from brass that are hanged in a bar over a resonator made from bamboo or zinc. Its play is by tapping the metal using stick made from bamboo covered by fabrics.

Gong is a big closing instrument in Gamelan ensemble. Gong player usually closes the play by tapping the instrument and marks off the line of the performance. Then other player will start new line by setting off their instrument as well.

Siter is a stringed instrument in Gamelan ensemble. It also has partner called Celempung. They have both respectively 11 and 13 strings placed between its resonators. It has fast paced tempo play since it’s usually played alongside Gambang.

A Flute just like other flute is wind instrument to allow richer harmony and perfect performance.

Kempul is a bunch of mini gong that’s hanged with the main gong. It’s one of the hard instrument in Gamelan. Kempul can be played in the same tone as Balungan or overtake the tone first. Kempul produces higher sound than Gong. The smaller the size, the higher sound it produces.

Some international university offers a course in Gamelan to learn how to play these various instrumental. A few of them are California University (USA) and Tokyo University of Fine Art and Music (Japan). Moreover, in USA, There are many group and association that practice Gamelan as one of its activity. In 50 states, Gamelan is played around its 45 states. There are 400 Gamelan community from university and around 127 community actively practice the instrument. They even hold exhibition to show their skill in playing Gamelan.

14. Some Countries Includes Gamelan in Their Curriculum

A musical school in New Zealand, New Zealand School of Music (NZSM) includes Gamelan in their curriculum. This can happen because Indonesian and New Zealand government made an agreement in 1975. Students there is expected to master basic Gamelan instrument. They are also expected to understand Gamelan’s history and development.

15. Therapy Method in UK and Mexico

Convicted criminals in UK is obligated to undergo some rehabilitation program to learn how to play Gamelan. Most of them also feels like it could enhance their confidence after learning Gamelan.

In Mexico, Instituto Nacional de Psiquiatria Ramon de la Fuente uses Gamelan as therapy method for people with mental health problem. In their exhibition back in 2012, the show is closed by group of people who suffers Schizophrenia played Gamelan together.

Believe it or not, Gamelan has already sent in a mission in space. NASA in 1977, launched a satellite named Voyager in space to give information to extra-terrestrial beings. The information contains various sounds that in earth that are produced either by natural sound or human technology. One of that sound is the sound of Gamelan due to its complex and rich sound its instrument produces.

17. First Gamelan Festival in the World

The first Gamelan festival in the world was held in Canada in 1986. People who actively invent in this performance art came together and performed their version of Gamelan. This activity marked the Gamelan influence in the world as many foreign people came to Indonesia after that to learn how to play Gamelan.

Gamelan is one of the oldest heritage that Indonesia has ever owned. Its uniqueness and richness sound is one of its biggest asset. The amount of effort to learn and master the instrument is also a big challenge for everybody. This means that Indonesian generation has responsibility to keep this beautiful instrument alive. If not, it will only be artificial instrument without anyone knowing how to play it in the future. To avoid the worst scenario, all actors must come together to preserve this heritage.