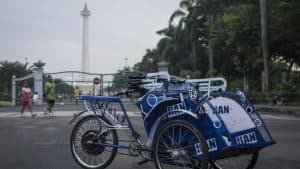 Becak is unique traditional vehicle that you can find across Java, Bali, and Sumatra. This type of transportation is constructed using three wheels with the driver pedals from the back. It’s called becak, a traditional vehicle using human energy to make it work. It basically looks like bicycle but it has three wheels instead. There are also a list for Indonesian public transportation and its interesting facts that might be beneficial for your visit in Indonesia.

Becak is usually found in tourism site and market to carry people from one place to another. Before motorcycle, cars, buses, and other modern transportation invest in Indonesia, becak is the main public transportation since colonial era. Some governments had to make certain regulation to make their number not exploding.

1. The Origin of Becak

Becak has long history before it lands its feet in Indonesia. It begins in 19th century with a man named Jonathan Goble who works for America’s Embassy in Yokohama, Japan. He has a wife whom he loved so much, but she’s paralyzed. One day he wanted to take her for a ride around the city without using animal force.

Then he decided to draw a sketch about simple wagon and handed it to a friend named Frank Pollay. He, then, handed the sketch to a blacksmith named Obadiah Wheeler. He then creates the wagon just like the sketch, and Goble used it to take his wife going around the city.

2. The Beginning of Becak in Indonesia

Becak came to Indonesia in late 20th century. Some version believe that it came to Indonesia via Chinese merchant from Singapore and China to Batavia (now it’s Jakarta) in 1930s. They use becak to carry their goods. That’s why in Indonesia this vehicle is called becak, because it’s derivation from Chinese word, bee (a horse) and tja (a wagon). This vehicle used to be carried by a horse.

There are also other nicknames that were used to call this vehicle such as betjak, betja, and beetja. But those nicknames actually have similar meaning with becak since Indonesia has history in changing its formal language a few times. But in 1937, Star Weekly magazines called this vehicle as three tires, before people named it officially becak when it was popular. Speaking about how people use language, there’s article about the beauty of Sundanese Language and also some deep philosophical sentences in Javanese Language.

Other believe that becak comes from Makassar to Batavia in the late 1930s, probably 1938-1939. This version has proven by a story written by Japanese journalist. In the article, it’s mentioned that there once was a bike merchant in Makassar but the business didn’t do well. Then, the merchant modifies his product to be the one that Indonesian people calls nowadays becak to attract more people to buy.

Indonesian becak is different from its family, both Jinrikisha (Japan) and Angkong (China). Becak uses air tire which is more flexible and easier to use, while Jinrikisha and Angkong both uses dead tire. It’s harder and heavier to carry. It’s also pushed from the back of the passenger while the other two is pulled from the front side.

After being introduced in Batavia, people start to use becak as public transportation. Since it was popular, becak was brought to Surabaya in 1940. When Japanese occupation (1942) happened, the number of becak grew so fast due to its tight policy about fuel consummation and private vehicle ban. Thus, the demand of becak grew bigger that it became favorite and popular public transportation at that time.

After independence, population of becak grew rapidly due to high demand. In 1950s, becak hit 25 to 35 thousands in quantity. in 1966, it hit 160 thousands units in Jakarta alone. Those number worried the government and blamed for the cause of congestion. Then, governor of Jakarta at that time tries to decrease its number by producing machine-based becak that can carry more people in single vehicle. Most of becak driver then change their becak to use newer vehicle and decrease a lot of becak’s number. That number makes one of reasons why Jakarta suffer traffic jam all the time until now.

Nowadays becak is still used as public transportation. People can find it in strategic places where tourist comes and goes, such as train station, bus station, markets, and tourism site in Indonesia. Most of them offers a ride to a certain place and a tour.

4. Types of Becak in Indonesia

Each province in Indonesia has also different type of becak. Javanese becak can be found everywhere in Java island. It mostly has the same design: passenger’s seat is in front with a cover above them and the driver seats in the back pushing the becak using their force.

While in the other region we have Becak Siantar which uses machine and fuels to run it. There’s also Becak Dayung Medan where, unlike its Javanese version, the driver seats in front pulling the passenger in the back using their force. There’s also Becak Makassar which has the same design with the Javanese one and Becak Gorontalo and Medan that’s similar with Becak Siantar design-wise.

Sadly, not many people ride becak anymore. Younger generation tend to use private vehicle and newer technology-based public transportation service as they give cheaper price and faster access to go to a place. Becak now only can be accessed in certain place like tourism site to give foreign tourist a ride and to give them traditional live of Indonesian people.

It happens mostly in Javanese provinces, but still, you can find becak in strategic place such as train or bus station and take their service to give you a ride just to be nostalgic with traditional Indonesia when everything isn’t always have to be digital.

Those are the history and development of unique traditional transportation in Indonesia. It has long history from Japan to Indonesia. It also has various development throughout decades. It’s one of the ancient transportation in Indonesia if we see that through history. Sadly, it could be one day disappear due to the increase of technology that’s faster and high demand of newer transport technology.