Not only hotels and villas that are decorated with Christmas tree, the roads leading to the hotel are also decorated with exciting chandeliers, while at night chants of Christmas carols can also be heard. Most local television stations will broadcast Christmas music concerts as well as annual national Christmas celebrations held by the government to bring in the festive moods

There are always beautiful things in Bali. It feels like it’s true. Not only the beauty of nature, Bali also has a beauty in culture and diversity. The beauty is also radiated through the Christmas celebration on this island. Although the population of Bali is dominated by Hinduism, due to the many expatriates and booming tourism industry, then the experience of vacation there is not only dominated by Balinese culture, but the Christmas celebrations are wrapped in Balinese culture that many people can also enjoy.

Most Christian villages are located in the southern part of Bali. The inhabitants will wear traditional clothes and decorate the streets with penjor (bamboo-like janur), this decoration represents the dragon Anantaboga, one of the Balinese mythological figures. Christmas celebrations in the Bali area are not much adorned with Western culture but are more influenced by Hindu-Bali culture

b. Decorate Street with Penjor

Balinese dancer is also performed in the church yard when Christmas worship is over. Usually, the Panyembrahma dance was performed by small girls among hundreds of devotees who had finished their Christmas service. As the girls danced to Balinese gamelan music, then normally figures of Santa Claus will appear to entertain and sharing cakes for the children.

Christians in Banjar Tuka, Dalung and other rural areas in Jembrana and Tabanan districts during Christmas celebrations mostly wear traditional Hindu clothing in Bali while performing ritual activities. The tolerance of religious life in Bali is so strong, among others reflected in the use of Balinese language in hymns of worship as often echoed in the Parish Church of the Holy Trinity of Tuka as well as in the Palasari church, Gumbrih, Jembrana District. The atmosphere there always calm and solemnity during the celebration of Christmas and the celebration of the other religious festivals on the Island of God that are signs of the strong tolerance of life among religious believers in Bali.

The Holy Trinity Parish Church of Tuka, for example, inherits a gamelan device, a traditional Balinese musical instrument as it is commonly inherited from every indigenous village on the Island of the Gods.
A traditional musical instrument that is used to accompany the Latin songs, songs in the Indonesian language as well as songs in the language of Bali. Musical instruments with the various genre are commonly used to complement the activities of church rituals, including the sacred mass of Christmas celebrations. Creation and innovation of arts involving young people of the church that can not be separated from the standard and rules in Balinese art culture 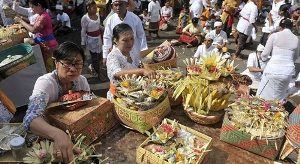 The tradition of Penjor has been carried out since the time of the ancestors of Bali in the area in 1937. Penjor is the cultural heritage of Bali’s ancestors and will continue to be used as one of the complementary Christmas celebrations in the area

Balinese people while doing tradition of Penjor then they are also doing Ngejot tradition, which means Christians in Bali will cook Balinese food and distribute it to their Hindu neighbors. This tradition is also done during Hindus people when they celebrating Galungan. So, they respect each other who are celebrating their own big day in their religion. Also, in addition to distributing food, Penjor or Janur decoration is also installed when the Christmas festivities arrive. In addition to making Penjor, people in the area also decorate the church with accessories that nuanced traditional Balinese culture.

Balinese as people who live in areas that uphold the values of ancestor tradition whilst celebrating Christmas they also implement it with a certain unique culture. The traditional ceremony to celebrate the Christmas of Blimbingsari Village residents is held by holding various Balinese ceremonies and dances.

Indigenous tradition and Balinese culture are attached to the celebration of Christmas just like the celebration of Galungan ceremony of Hindus. There are typical Balinese decorations erected in every corner of the village. Uniquely, when the celebration is held for a Mass then during the delivery of the speech there was held a series of worship using a tradition typical of the people of Bali. When delivering the verse in the bible then each verse is delivered using a traditional dance. The people will then observed it from their arranged seat.

For those who want to celebrate Christmas using modern tradition then you can do surfing on the beach, go shopping in the malls and watch the festive fireworks that were held in the main city square. With many people crowding bars and restaurants then surely a lot of people will have a great time celebrating the birth of Jesus. 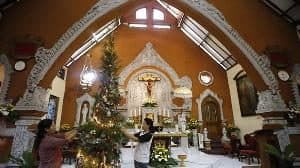 If you are traveling to Bali and it happens to be approaching Christmas, then you can stop by Blimbingsari Tour Village, Jembrana Regency of Bali which is entirely Christian.

On the other hand, if you go for a walk during Christmas time there then you will find penjor, bamboo ornaments from janur complete with accessories plugged in front of the fenced yard of each house of the Christians residence. You can see the beauty and splendor of the celebration not only in Blimbingsari Village but also in Banjar Tuka, Dalung Village, North Kuta District, Badung Regency, Bali.

Banjar Tuka includes an expansion of the surrounding settlements with a population of 800 families, a Christian majority. The natural atmosphere of the rural environment still looks sustainable and green is the first village in Bali whose population converted to Christianity, since 1937 or 75 years ago. The spread of Christianity was marked by the first baptism by the evangelist Tshang Toha (China) to a number of residents in Tukad Yeh Poh, Dalung Village, Badung Regency.

Penjor decoration in Christmas occasion can be seen along the rural road about 15 km northwest of Denpasar City. The ornaments will remind you of the festive celebration of Hari Raya Galungan, the Day of Victory of Dharma (good) struggle against Adharma (evil).

Another unique tradition of the Christian community in Bali when celebrating Christmas is that they wear traditional Hindu clothing in Bali while performing religious worship ritual activities. They wore clothes, yellow scarves, headboards for men and wearing kebaya for women. They are present in churches that have been decorated with Christmas trees, offerings and fruit and janur combination (gebongan). For their worship songs, they also use The Balinese language, echoed in the Parish Church, the Trinity of the Holy Tuka as well as in the Palasari Church, Gumbrih, Jembrana District.

Christmas celebrations can also be enjoyed in Bali, this can be surmised by the massive arrival of foreign and also domestic tourist coming to the area. The sensation of Christmas in Bali has a different atmosphere. During Christmas, the Balinese Christians will gather in unique churches that blend traditional Balinese architecture design features.

Christmas celebrations in a  religious tolerance can be seen in Bali. In addition to involving residents of other religious people, local traditions of Bali is also very influential during Christmas celebrations there. The Christmas celebration in Bali draws its uniqueness from the Hindu influence that’s pervasive there. In essence, a Christmas is a time when one celebrates the joyful nature of their gods and bring happiness to their surrounding by sharing gifts. This, in turn, will draw the crowd to join in the festivities that’ll even bring more tourism to Bali and increase the local economy there.

8 Oldest Church in Indonesia Among the Diversity