Bali is a popular island in Indonesia. It is well known for its beautiful beaches, scenic views and of course, the food. There are a lot of authentic, local food in Bali. Some of them originated from various regencies in the Island. Below are 17 Traditional Meal in Bali. Find out what these traditional meals are and what makes them special. 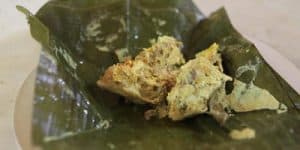 Tum is a meal consisting of steamed meat. The meat is made through a cooking method that is authentic to Bali. For the meat, it could be chicken meat or beef. Some people actually prefer to use pork. The meat used in Tum is usually cut into small pieces.

There are many spices and herbs used to cook the meat. Some of the spices and herbs include shallots, chilis, lemongrass, gingers and garlic. Everything is wrapped inside a banana leaf and then steamed. 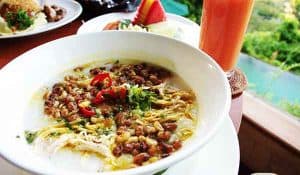 Bubur Mengguh is a meal that originated from the Buleleng regency in Bali. Bubur Mengguh is a porridge served with chicken broth, chicken shreds, celery and crunchy peanuts that are already roasted. Sometimes the porridge also comes with urap. This food is an important part of many ceremonies carried out in Bali. 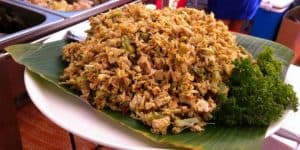 Lawar is also a traditional meal from Bali consisting of meat. The meat used for this dish could be chicken, turtle, duck, pork or beef. The meat is chopped into pieces and then mixed with a variety of vegetables. Grated coconut is added into the mixture.

There are actually 2 types of Lawar. The first one is called Red Lawar. The blood from the animal is added into this Lawar. The colour turns into red and the flavour becomes more savoury. The second one is White Lawar. There is no animal blood in the White Lawar. 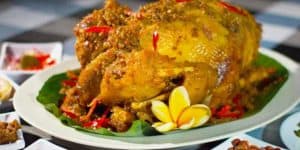 Betutu is also a dish that is always present in many Bali ceremonies. This particular meal takes a long time to prepare, up to a day. The main ingredient for this dish is duck meat. The whole duck is stuffed with an intricate combination of herbs and spices. Ginger, peanuts, shallots, garlic and lemongrass are some of the stuffing put into the duck.

The duck is then steamed. After it’s done steaming, it is then grilled. Betutu is a very tender meal and often served with steamed rice. 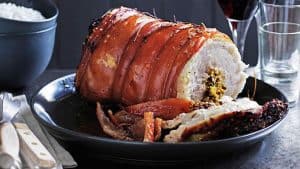 Babi Guling is another meal that is authentic to Balinese cuisine. Similar to other dishes, this one is also used in a lot of ceremonies. Babi guling is simply a roasted pork. A whole pig is roasted by rolling it over a burning fire.

The word guling itself means rolling while babi means pig. The pig is slathered with many spices and herbs that are local to Bali. The grease also helps to make the meal tastier. Altogther, they make the finished pork very flavourful. 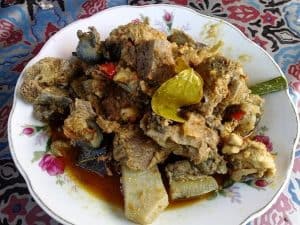 Serapah Penyu is a meal with turtle meat as the main ingredient. The shell is removed from the turtle. The meat is mixed with various herbs and spices and then boiled. It is then grilled and served. 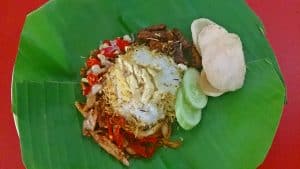 Nasi Jinggo is a very local Balinese food. It is a small portion of rice that is sometimes wrapped inside a huge banana leaf.

The portion is so small which is perfect for those who are looking for a light meal. Other than rice, there are also vegetables, noodles, egg or shredded chicken inside the wrapped banana leaf. The price of Nasi Jinggo is very affordable. This meal is often sold on the side of the roads. 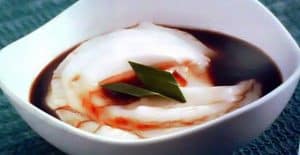 Bubur Sumsum is a traditional porridge in Bali. The overall taste of this meal is sweet. Both white and black glutinous rice are used to make Bubur Sumsum. Another key ingredients to make the dish are coconut milk, pandan leaves and palm sugar.

Both types of glutinous rice are boiled along with coconut milk and pandan leaves until they form a thick consistency. The rice is ten served with coconut milk, palm sugar and thinly sliced bananas. 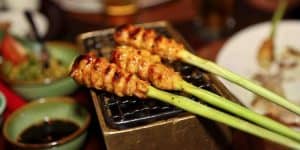 Sate Lembat is a type of satay with some modifications that add a Balinese taste to it. The meat is minced and slathered with paste that is usually used for Babi Guling or Betutu. After that, it is pounded over grated coconut.

The meat is then put on some thick lemongrass or bamboo sticks. The satay is grilled over coals for several minutes. Once it’s done, Sate Lembat is served with a shrimp paste or sauce called sambal matah. 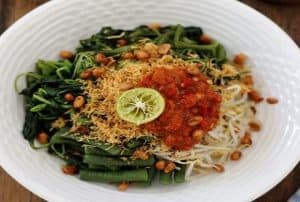 This next traditional meal of Bali is called Serombotan. Serombotan is a type of food that originated from the Klungkung regency in Bali. It can be described as a spicy meal. There are many kinds of vegetables that go into this meal.

They include spinach, bean sprout, round eggplant, red beans, long beans, bitter melon and even water lily. All those vegetables are boiled. Both fried peanuts and soybeans are added into the mixtures. Serombotan is served with young grated coconut, chili sauce and lime juice. 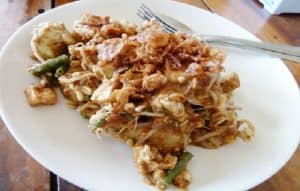 Tipat Cantok is also a traditional meal from Bali. It’s so traditional that it is rarely sold in big restaurants.

Tipat Cantok is more often sold in warung, which is a small food stall usually located on the side of the street. This traditional food is made up of rice cake that is already blended with peanut sauce.

There are steamed vegetables such as long beans, bean sprouts and water lillies that also come with it. A small amount of sweet soy sauce is added on top of the dish to make it sweeter. 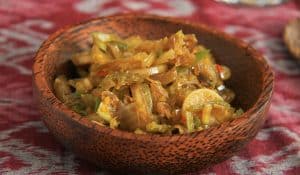 This particular traditional dish is a soup. Most of the time, it is only served during special occasions. During ceremonies, sometimes a chicken or duck is cut. The meat are taken away to make different kinds of food.

Meanwhile all the bones are left out to make Jukut Ares. An important ingredient for Jukut Ares is a very young slice of a banana tree. The approximate weight used for the meal is around 1 kg. All the ingredients are cut and mixed together with spices to make the soup. 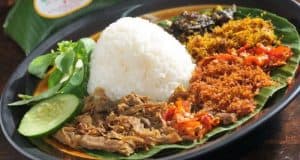 Nasi Tepeng is a meal that comes from the Gianyar regency in Bali. In the regency, Nasi Tepeng is a popular  Traditional Balinese Breakfast choice for the people. Nasi Tepeng is made from rice. However, the consistency is between that of normal rice and porridge.

There are various spices and herbs added for flavour into the mushy meal. There are also other vegetables and protein to make the meal more fulfilling. Egg, beans, eggplant, jackfruit and chicken are usually added into Naasi Tepeng. 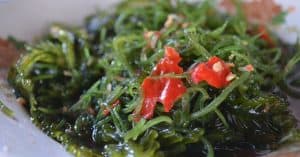 Rujak Bulung is a type of Balinese salad. It’s quite a simple traditional meal. The main component of Rujak Bulung is seaweed. The seaweed is boiled for a short amount of time.

After that, it is immediately put into ice. Tuna broth is sometimes added into the seaweed. Young coconut grates are also put on top of Rujak Bulung. It can be quite spicy as chilli is sometimes mixed into the whole food. 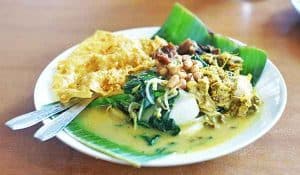 Tipat Blayag is a traditional meal that originates from the Buleleng regency in Bali. Rice is steamed inside a banana leaf. The shape is a long one. Instead of using coconut paste, cornflour is used. The cornflour is mixed with a combination of Balinese spices and herbs.

The thick consistency of the cornflour paste is similar to that of coconut milk. Proteins such as shredded chicken are added to Tipat Blayag. Other ingredients may also be added to enhance the flavour such as vegetables, beans sprouts, fried peanuts and chicken skin cracker. 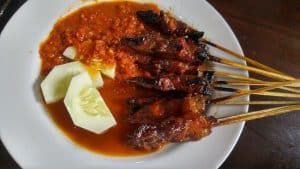 Sate Plecing is another type of satay in Bali. All kinds of meat can be used to make Sate Plecing. Beef, pork and even fish are some meat that are good for Sate Plecing. In Indonesia, most satay are served with the common peanut paste or sauce with a little bit of sweet soy sauce.

It’s a different case for Sate Plecing. The satay in this meal is not served with the peanut paste. The dish is served with tomato paste made with chili, salt, prawn paste, fresh tomato and a small squeeze of lime juice. 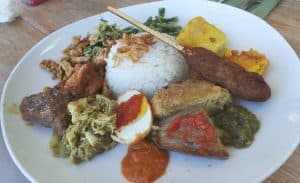 Nasi Campur Ayam Bali can be loosely translated as Bali Mixed Chicken Rice. The food mainly consists of warm rice. The warm rice is then mixed with all sorts of other food in Bali that are already mentioned here.

The warm rice can be mixed with Sate Lembat, Betutu or Lawar. Other choices to mix with the rice could include eggs, the skin of chicken, cassava leaves, tuna and fried peanuts. Spicy sauce called matah or embe are served with this dish.

Although a huge portion of these meals are available in Bali on a daily basis, some are often saved for special ceremonies. Nevertheless, each of the traditional food in Bali is a cuisine experience that cannot be found anywhere else in the world.