Tarantula is the name given to one of spiders type. Different with the common spiders, tarantula has large size and has a hairy feature on its body.  Most species of tarantulas are not harmful to humans, some of them are being famous in trading world as an exotic animal.

Just like the other spiders, tarantula has fangs therefore it can be considered as one of the Dangerous Animals in Indonesia, it bites and can harm the human. In general, the entire tarantula body filled with feathers. Tarantulas live in warm regions around the world, They are also found in rain forests, deserts and other habitats.

The distribution of its habitat includes South America, southern part of North America, Southern Europe, Africa, southern Australia, and Asia (especially Indonesia). Here are the list of tarantulas that mostly found in Indonesia. 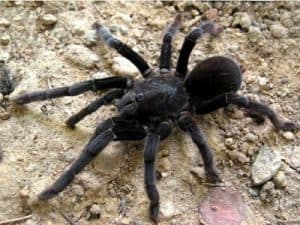 Its name reflects that this tarantula is coming from Indonesia, named after Javanensis because it is firstly found in Java Island in Indonesia.

This tarantula includes the list of tarantula which has aggressive behavior but it tends to have a slow motion when it’s moving.

This kind of tarantula commonly found in forests or rice fields in various islands in Indonesia.

Another distinctive feature of this tarantula lies on its body color, these tarantulas are usually have dark color (mostly black) but some of them have yellowish color on its legs. 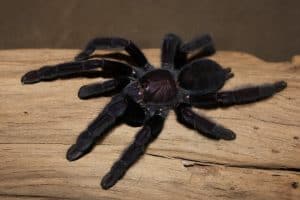 This tarantula can be found in Sangihe Island Indonesia. Unlike other Lampropelma species, this Tarantula has short and strong legs, a dense femoral fringe, as well as an unclear tiger pattern in the stomach of adult female tarantulas.

This is one kind of large spiders too with  a leg range up to 16 cm. Meanwhile the length of its body (carapace) is about 2 cm. This tarantula is well-known in  in the small island of Indonesia, Sangihe.

It was considered extinct but then being re-discovered in November 2007 by Jean Michel Verdez and Christophe Bauduin.  It lives in primary lowlands and forest hill, exactly in the hollow trees. The adult female tarantulas commonly found in large adult trees, however the young tarantulas can be found behind loose leather, in stone cracks and manmade structures such as bridges and streets. 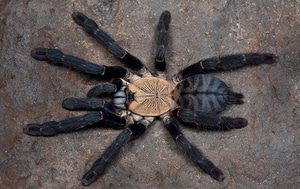 It resembles  C. schioedtei at a glance but this tarantula has more specific characteristics.

First of all it generally has darker color with more bold prominent belly marks.

Second, this tarantula looks pretty strong with the legs that are manlier than C. schioedtei. Third, it has  a distinct dark folium-like carapace pattern in postmolt specimens.

The male Cyriopagopus sp. “Sumatran Tiger” generally has brown color with black legs and white feet. This kind of tarantula is widespread in West Sumatra region. This tarantula lives in lowlands and forests in the hills, usually reside in perforated trees.

The adult females mostly found in large trees, but young animals can be found behind loose leather, in stone cracks and manmade structures such as bridges and streets, just like Lampropelma Nigerrium. 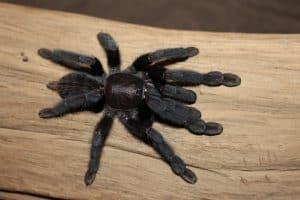 Lampropelma sp. “Borneo Black” is a large arboreal black tarantula of the subfamily Ornithoctoninae, considered as Animals of Borneo.

Unlike the other typical of Cyriopagopus, it has strong legs and very dense femoral fringes, and a tiger-like pattern in its stomach.

There is a distinct difference between the two sexes once they reach large juvenile.

Males will become more reddish to tan in appearance and females will remain jet black. Males of this species will normally mature at 18 months where as females can be sexually mature in 2 years but not fully grown until 3 or 4 years old.

These spiders are found in Central, South and East Kalimantan, the Sabah state in Malaysian Borneo and also Indonesian Borneo. They are normally found in monsoon rainforest where they live in hollow trees high off the ground. This tarantula species needs a hollow log or cork bark tube. 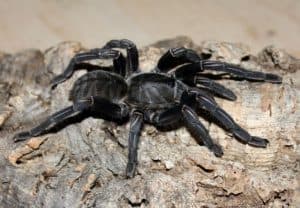 Cyriopagopus sp.”sulawesi black”-Northern Sulawesi, Indonesia. It is also called as “Gray Sulawesi Velvet” because it has a velvety gray life appearance when newly molted.

This is the largest arboreal tarantula in the subfamily Ornithoctoninae. Or we can simply say that the adults of this species is one of the giants amongst the Cyriopagopus species and adult female’s can exceed 25cm leg spans.

Surprisingly this species can audibly stridulate (produce a hissing sound). Freshly moulted they are a beautiful shade of deep velvet black/blue with a silver grey sheen with powder blue chelicerae. 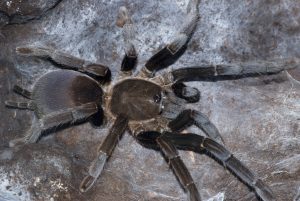 Ornithoctoninae G. sp. “Orange Fringed” is a large black fossorial tarantula from the subfamily Ornithoctoninae with a conspicuous orange fringe of setae around the carapace.

This happens to be one of the asian tarantulas that most enthusiast definetively seem to want in any serious collection.

The large spider of this species has a  a leg span of 20+ cm. and a carapace length of 3 cm. There is not a particular difference between the male and female Selenocosmia Effera Mollucas, the male generally has the same colouration as the female.

However the male species has a bit darker carapace, more obscure abdominal pattern and with narrower banding on the legs. The male has a blunt tibial apophysis and long slender legs. Subadult males can be easily sexed by the epigynal fusillae method.

There are some variations in this species, most likely due to regional variation, but could be different species. Basically the eastern varieties are jet black with a row of obscure paired pale abdominal dots and a conspicous orange fringe.

One of Indonesia’s original tarantula became one of the species that highy interested by the spider keeper because of its unique beauty and style. It has dark purple and black color with a bright yellow on the carapas .

Then, it was one of the reasons why this species is attractive for the spider collectors.

This species was discovered by foreigners Von Simmon in South Sulawesi in 1887.

Cyriopagus sp.hati, hati has a stretch of feet  until 18cm and carapas length up to 1 inch when reaching adulthood. For female sex the average life span reaches 10 years.

Those are complete explanation about how many common tarantulas in Indonesia that maybe you can found when you stay in Indonesia, especially in rural areas.