In Indonesia we can find a lot of animals that considered as endangered animals, like the ones you can find in the previous articles. They are different kinds of animals, different from classes, types and family. You can check them out if you haven’t. And now we want to tell you about some other things, you need to focus on this one because it has the relation with our own life.

Even though they are rare animals, they are still animals that can hurt you in any way they want. Some of them even have the deadly poison that can kill you so easily. They can bite you with their strong teeth that can even destroy an iron pole, more stiff and sturdy than your arm. All animals are prepared on our list oday with the title of 17 dangerous animals in Indonesia. 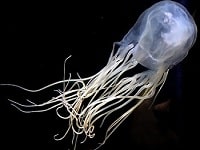 Jellyfish is beautiful, even though some of them is very dangerous. Like this one, Indonesian Sea Wasp is the queen of jellyfish in Indonesia, and also known for bringing some trouble for the swimmers all around the Indonesian seas.

The can sting you so bad that you need a rest at hospital, at least for one day. When you got hit, the lifeguards absolutely save you with the first kit. Just to reduce the hot and painful feels around the area that got sting. So, be careful if you swimming on the seas out there, if you happen to meet one of them, jst stay away from it as fast as possible. 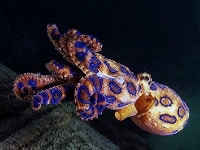 Indonesian animals are very wonderful, the seas animals included. But, the beauty is not only for you, that speciality is used to hunt the preys of them. Just like this one, the black ring octopus uses its circle glows on its body to attract some animals like fishes.

And then after they reach the close proximity, the octopus will eat them right away on the spot. They mouth is big enough to chew a whole fish in one bite. Also the skin is very poisonous, so don;t ever touch them directly. 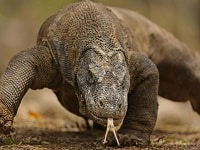 The well-known Komodo Dragon. We already talked about this in one of our articles before, the endangered animals of Indonesia. Komodo Dragon is a fast hot blooded killer. So, if you traveling to the Komodo Island and meeting one of them, just be careful to not get too close with it.

It has the really bad and poisonous saliva that can give you the worst bacteria you can get in your life. Just one bit of it, and you’ll die in several days. Komodo can also move so fast, that’s why you need to run faster to get away from it. 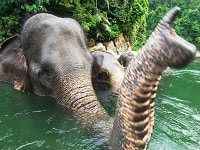 Even though they look very cute, but the elephants are the most gigantic mammals in this world that can hurt you in an easy way. Maybe some of you think that elephant is a kind animal, rideable, and also so friendly towards humans. But here’s some facts for you.

On the wild life, elephants become over protective with their herd or pack. So, if they found one problem that really make the herd feels unsafe, they will hunt you down. Especially when you approaching the elephants kids, the mother will run towards you at full speed. 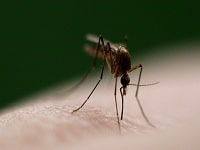 Some of the great killers in Indonesia ain’t the cold blooded killers out there. The number one killer in Indonesia is the dengue fever then, attacking the kids with so much ease because of the bad environment plus the rainy season.

There’s the most dangerous one of them all, the Aedes Agypty mosquitoes that bring the virus of dengue fever. This one is really trouble some, that’s why there are so many things to do to prevent this one little thing, like smoking the area of mosquitoes and some other else. 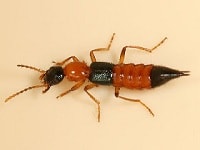 Rove Beetle became famous in 2015, when people in Surabaya city finally meet this little animals, in their own house. At first they didn’t know what kind of animal is this. They thought it was just an ant, that can be killed only by splatting them with hand.

But that’s the wrong way. This rove beettle has this kind of acid inside their body, so it will be really dangerous if you try to splat them with your own hand, because the acid will touch your skin. The acid will give you the pain and burns all around the area where you splatted it. 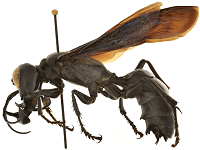 The next one in the seventh place we have Megala Garuda with us. This one is so big that you can see it clearly around the swamp and other areas in Indonesia. It’s the king of all wasps in Indonesia. The size is much bigger than the other wasps we’ve known, almost fit the size of our palm.

They’re not a friendly ones, just stay away from them as possible if you happen to encounter them on your travels. Remember, their size is much bigger than the usual bees or wasps, so the sting may get much painful. 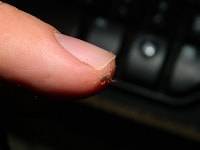 This one is considered as the smallest scorpion you can find in Indonesia. With its small size, it’s actually a bit hard to detect them around you. Their size is like more smaller than our thumb. So with that kind of size, the Chaerilus Scorpions won’t be that dangerous.

But, the sting of it can be a bit annoying though, and also if not careful enough you can swallow the water that contained the Chaerilus itself in it. So, in the forest you must be careful at anything you can find and need there, especially your personal belongings. 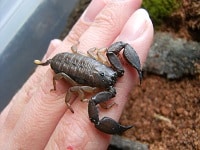 But, the venom of Australian Rain Forest is not so dangerous, painful maybe but can not lead to some serious illness or even death. So, this one can not bring any problem to your travel, even though its size is very scary. 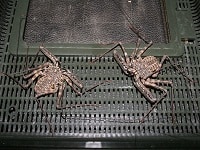 The next one is the Whip Spider, which also looks terrifying. This one is indeed one of strange things out there. The Whip Spider is not actually spider nor scorpions. It’s a bit confusing, but looking at the exotic things in life such as this animal can be a great experience.

They hiding during the day to prevent the encounter of another big animals. With their small size, they can’t do nothing except run away from battle field. This also have a venom, which not so poisonous. 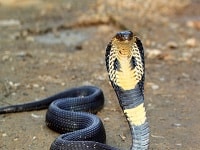 Well well, the other thing you can find in the jungle areas of Indonesia is of course the king of all snakes, Cobra. The Cobra is one of the deadliest animals out there, be careful if you see one on your trip.

The cobra is also a cannibal, that eat its fellow snakes that fell during a duel or ill. The cobra will eat the carcass as a whole, and not leaving anything behind. The venom of Cobra is really dangerous for human’s life, it can lead to death for the unlucky ones. 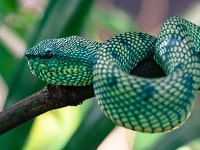 This snake is also a dangerous one. The venom of this perfect triangle shaped head will kill any human it infected. Usually the Blue Temple Viper hangs around the tall trees, and the short ones like banana trees for example.

The bite of Blue Temple Viper is deadly as the cobra’s. You need to be careful if you live in a village, or going somewhere inside the jungle. Be sure to stay away from the tall trees. Also be focus, not to mis looking the snake for a long leaf. 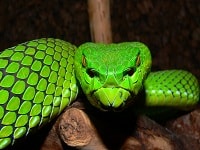 The Green Pit Viper is the snake that can be found near us. Usually there are some rice fields in our location, especially in here Indonesia, where you can find so many rice fields. This snake lives in there, waiting its preys that consisted of mouse, birds, and the other little snakes.

With its eyes, you can see the sharp shape in its eyes, resembling that this snake is also a poisonous one. Even though can’t lead to death, the bite of Green Pit Viper can give you unpleasant feeling throughout the day. 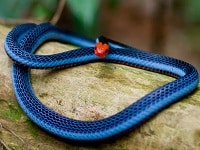 This one is not dangerous as its two brother above, but with it’s physical appearances that slim and very flexible, it can run more faster than you do. Well, that’s why, when you meet one of them on the street, you can start to run right away without hesitating one moment.

Even though the bite is not so painful at first, it will spread the venom of neurotoxin poison that considered as trouble some poison. You need a medical attention right away to remove the poison inside you body, because the speed of the spread can be so fast. 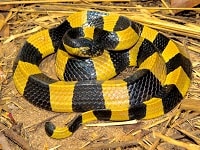 The banded Krait is not so aggressive in common, but once you step on it accidentally, the story can get a little bit different. Of course, any snake will be angry if you annoy them in many ways, but with its colour that very similar to the dirt and sand, it can be pretty hard to detect this snake.

So, you need to be careful of stepping on something in the wild. Even though the size is really small and long (even longer than the cobra), it also can give you a “little present” of venomous bite. It will not kill you that easily, but still. 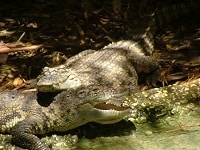 The Siamese crocodile is actually a peaceful and calm animal, that really loves to hang around with its family on the quiet lake and river. They don’t want to attack you just for eating, no other reason beside from yourself. If yo try to approach them closely, they will think that you’re crossing the area, and that’s a big no no.

So, if you want take a look more closer at them, don’t try to visit their home, that’s really inappropriate and dangerous. You should visit the zoo to study them, where all the things are save, including your life. 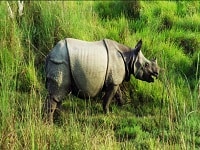 The last we have here is the Asian Rhino. The status of it is rare, just as the animal above. This animal is a though and strong animal, it can flip your car so easily with some trusts. So, don’t even think about messing up this rhino, because it’ll be a fatality for you.

The speed of a Rhino is a really fast, even can overcome the speed of a car. It also increasing when a rhino is in anger mode, which is a really bad condition. So, if you happen to cross a rhino in your way, you can climb up to the trees or just keep speeding up to avoid that scary encounter.

Those are the 17 dangerous animals you  can find inside our beloved country of Indonesia. If you happen to meet them in one of your travels, be sure to not approaching them directly. Even physical contact is really dangerous. Some of them have the poisonous skin, so it’ll be a very bad choice if you want to touch them. Keep the far distance with them and prepare to move far away from them. You can climb a tree so they can’t catch you. That helps a lot actually. So, thanks for watching and see you on the next ones!