Indonesia uniqueness is not only found in the natural wealth and beautiful panorama. In this beloved country, you can find dozens of endemic animals that will not be found in other parts of the world. The reason for this is that Indonesia is a country with the high animal population. It is estimated that there are more than 165 species of mammals, 397 species of birds, more than 150 reptiles, and more than 100 species of amphibians are recorded as endemic in Indonesia. Below it’ll be discussed some of them. 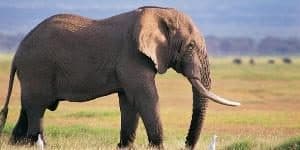 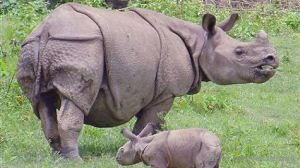 Javan Rhino, or small-horned rhinoceros (Rhinoceros sondaicus) is a member of the Rhinocerotidae family and one of the five remaining rhinos. This rhino enters the same genus as the Indian rhinoceros and has a mosaic skin that resembles a steel armor. The rhino has a length of 3.1 to 3.2 m and a height of 1.4 to 1.7 m. The size of the horn is usually less than 20 cm, smaller than that of other rhino species. This rhinoceros was once one of Asia’s most widespread rhinos. The population of 40-50 rhinos lives in Ujung Kulon National Park on the island of Java. 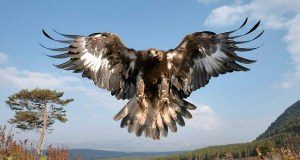 Javanese Eagle (Nisaetus bartelsi) is one species of medium-sized eagle that is endemic in Java. This animal is considered synonymous with the symbol of the Republic of Indonesia, namely Garuda. And since 1992, this bird is defined as the mascot of endangered species of Indonesia. This bird has sized from medium to large, slim, with a body length of 60-70 cm.

The eagle is limited in Java, from the western end (Ujung Kulon National Park) to the eastern tip of Peninsular Blambangan Purwo. However, its distribution is now limited in areas with primary forests and in forested hill lands in lowland transitions with mountains. Most are found in half the southern hemisphere of Java Island. 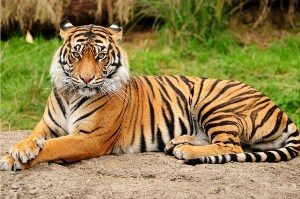 The Sumatran tiger (Panthera tigris sumatrae) is a tiger subspecies whose original habitat on the island of Sumatra, is one of six tiger subspecies that survive to date and is included in the critically endangered criteria on the threatened species list of IUCN Conservation Society. The wild population is estimated to be between 400-500, especially living in national parks in Sumatra.

Recent genetic testing has revealed unique genetic markers, indicating that this subspecies may develop into separate species, when successfully sustained. The destruction of habitat is the greatest threat to the current population. Logging continues even in national parks that should be protected. Recorded 66 Sumatran tigers were killed between 1998 and 2000. 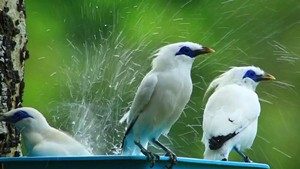 Jalak Bali (Leucopsar rothschildi) is a kind of medium-sized chirping bird, with a length of approximately 25cm. The Balinese starlings have special features, among them having white feathers all over their bodies except at the tail end and its black wings. The cheeks are not overgrown, bright blue and grayish legs.

Jalak Bali is endemic in Indonesia, Bali Starling is found only in the forests of the western part of Bali Island. This bird is also the only endemic species of Bali and in 1991 was crowned as the symbol of the fauna of Bali Province. The existence of endemic animals is preserved. The Balinese starlings were first discovered in 1910. 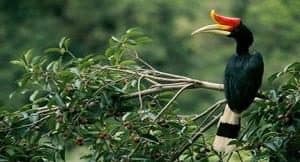 This bird also became the mascot of West Kalimantan Province and included in the type of fauna that is protected by law. In the culture of Borneo, the hornbill ivory is the symbol of “Upper Realm” which refer to other worldly existence.

On the island of Borneo, ivory hornbill is used as a symbol of the region or symbols of the organization such as the symbol of the province of West Kalimantan, Rangkong Gading bird is also a symbol of Dayak unity which is often embodied in the form of carving on Dayak Culture, while in Banjar culture, The Ivory hornbill is carved in a disguised form. 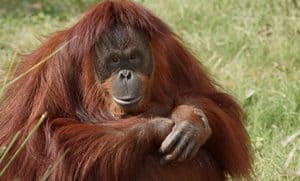 Orangutans are found in the tropical rainforests of Southeast Asia, on the islands of Borneo and Sumatra in the Indonesian part of the country. They usually live in dense trees and make their nests from the foliage.

Orangutans can live in various types of forests, ranging from the forest, hills and lowlands, watersheds, freshwater swamp forest, peat swamps, dry land on mangrove swamps, to the mountain forests. the greatest threat being experienced by orangutans is the increasingly narrow habitat because the rain forest areas that become their residence are used as palm oil, mining and trees are cut down for timber harvesting. Orangutans have lost 80% of their habitat area in less than 20 years. 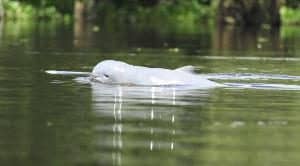 Mahakam dolphin (Orcaella brevirostris) is a type of mammal animals that are often called freshwater dolphins that are almost extinct because based on 2007 data, the population of this animals are only 50 left and was ranks as the highest priority of endangered Indonesian animals. Unlike other water mammals that are dolphins and whales that live in the ocean, mahakam dolphins live in the rivers of the tropics. The population of this endangered species is protected by law. This dolphin is found in many river estuaries in Kalimantan, but now it is a rare animal.

In addition to the Mahakam River, the dolphins are also found hundreds of kilometers from the ocean, which is in the District of Kota Bangun, Kutai Kartanegara, East Kalimantan. The habitat of this dolphins can be found also in the waters of Lake Jempang, Lake Semayang, and Lake Melintang. 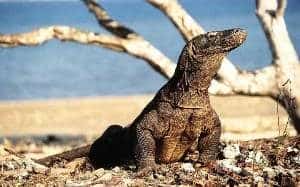 Komodo (Varanus komodoensis) is the largest lizard species in the world that lives on the islands of Komodo, Rinca, Flores, Gili Motang and Gili Dasami in Nusa Tenggara, the largest lizard of the island of Komodo is also called ora. The numbers are shrinking due to human activity and hence the IUCN is incorporating Komodo dragons as a species prone to extinction. This large lizard is now protected under Indonesian rule and a national park called Komodo National Park that was established to protect them. Many tourist has come to the area to see this exotic animals. 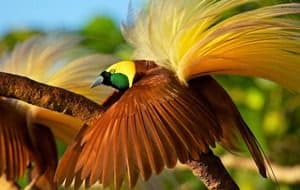 Cenderawasih Bird (Paradisaeidae) is found in eastern Indonesia. It is reasonable to say that these are also called birds of paradise. The bird that became the mascot of Papua does indeed have the beauty with a beautiful fur color. Because of its colorfulness, the bird of paradise is called a bird from heaven. In fact, reportedly because of its beauty the bird rarely goes down to the ground and are often fly in the air and perch on the branches of trees.

Birds of Cendrawasih have been included in the list of protected species under Law No. 5 of 1990 and Government Regulation No. 7 of 1999. The utilization of cendrawasih bird feathers is still allowed only for the benefit of local people in decorating their customary attire.

Beside what i’ve explained above, there are other native animals in Indonesia which is still exist, as follows:

Mentawai Bears or Macaca pagensis is an endemic primate of Mentawai in Sumatra. Animals that locals call bokoi have fewer populations, so they are categorized as endangered. By the Western world, rare monkeys like this are often the object of scientific research and is known globally as Pagai Macaque

The bird is from North Maluku and is an endemic animal, and still, belongs to the paradise family bird. The bird named Latin Semioptera wallacii has beautiful fur with a combination of brown, green and olive colors for female birds. The color of the male feather is even prettier, with a pale purple-colored crown and an emerald green adorning his chest.

The type of long-necked turtle can indeed be found in some countries other than Indonesia. However, the Snake like Neck Tortoise or Chelodina mccordi which is an endemic animal of Indonesia can only be found in Rote Island, East Nusa Tenggara. This animal is so rare that by IUCN is set out in the category of endangered animals.

Anoa is an endemic Indonesian animal that you can only find in Sulawesi. This fauna that became an icon of Southeast Sulawesi province is a protected and rare animal. It is estimated there are only less than 5000 Anoa living today, Anoa is often hunted for its skin, horns, and flesh.

Red Arwana fish (Sclerophages formosus) is an endemic animal of Indonesia that inhabit the Kapuas River in West Kalimantan. This beautiful rare fish has bright red scales, with a little gold sparkle that makes it look so elegant. No wonder that Arwana fish often gets the nickname of Dragon Fish

Red Cat (Pardofelis badia) or also known as Borneo Bay Cat is a species of an endemic cat of Borneo Island. This rare cat has reddish-brown fur, with the pallid part of his back. Characteristic of this Borneo cat is a light brown red line on the forehead and cheeks. The ears are black or dark brown, while its tail is adorned with a white line and black spots at the end

This Paradise Birds or Cicinnurus respublica is an endemic animal of Waigeo Island, Raja Ampat, Papua. This gorgeous rare bird has red and black fur, with a yellow nape and a bright green mouth. The legs are blue, and on its tail, there are “ornaments” in the form of two long, circular feathers. In its head, there is a light blue color.