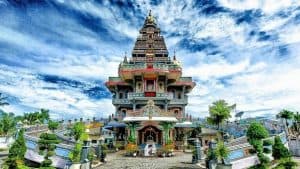 Do you know the location? Yap, it is located in North Sumatra Province with Medan as the capital city. It has been popular that the majority of the population of Medan City is Batak tribe. However, to know more about Medan, you should read these following facts.

While the characteristics of Medan people can also be seen from the clan, however Medan people not necessarily originated from the Batak tribe. There are various kinds of people in Medan, such as: Tionghoa, Tamil, Javanese, Malay, Karo, Aceh, Nias, and Minang. It could be concluded that the people of Medan basically is not just Batak people. The stereotype that says Medan is Batak could not be proven. (Read also:  Indigenous Tribes of Indonesia)

It has been famous that Medan people like to speak loudly. Their characteristic as the powerful and strong person creates the strong intonation while they are speaking. They have the popular strong accents while having conversations. . Some people might think the people of Medan are arguing while having a normal conversation. They are identically known as having the strong stubborn.

The stereotype that reveal almost of Medan people are Christians and originated from Batak tribe is totally wrong. Medan city is a multiethnic city.  Medan has a wide variety of ethnics with the majority of ethnic such as Javanese, Batak, Tionghoa, and Minangkabau. The ethnic diversity in Medan could be seen from the number of mosques, churches and Chinese temples scattered throughout the city. There is also an area in around Jl. Zainul Arifin that known as Kampung Keling, which is a residential area of ​​Indian descent.

Many people assume that Medan’s original inhabitants are Batak people. In fact, there are historical buildings that prove that the building belongs to the Malay kingdom in Medan. Maimun Palace is one of the most famous buildings. Why is Malay forgotten in Medan? Malay tribe basically is the largest tribal society in Sumatra. Because of the domination character of Batak people in Medan, they form an acculturation.

Medan today has grown into one of the most attention-grabbing cities, especially in terms of development. It was made this city as the third largest metropolis after Jakarta and Surabaya. Although Medan has been becoming an urban city, the city still saves a lot of local wisdom that makes it more interesting to visit.  You can explore various exotic tourism places, make the tongue re-precision by eating local foods, or find a handsome/pretty mate.

Medan language is not a hobo language. Language of Medan is unique because of cultural diversity. There is an acculturation that creates a new language. Medan people are famous for his high accent. In Indonesian language, it is called “Dialek Medan” or the Medan accent. The language of Medan is actually one of the “Malay Dialects” that has been formed for hundreds of years ago. It has been mixed with languages ​​such as Batak (Karo, Toba and Mandailing) and languages ​​brought by immigrants like Minang, Aceh and Melayu Pesisir.

In Medan, there are a lot of durian sellers. They sell by bicycles, rickshaws, pick-ups, open roadside stalls, durian trucks, even selling online to travel to destinations such as durian pancake and durian tupperware (peeled peanuts tupperware container).

But now most people if hearing the “City of Medan” must have come directly to mind is the Batak tribe. There is nothing wrong with this assumption, because at the moment there are very few Malays who live in Medan City Center, and even then they do not live in groups, they are left to spread and merge with other groups. However, the people call Medan as the city of Melayu Deli up to now.

From the 2013 poll of the Indonesia Research Center (IRC) shows that the majority of residents in Medan are not able to realize a sense of security for its citizens. The score was minus 3.2 percent, as the number of people who claimed to be insecure was higher, compared to those who felt safe (51.6 percent to 48.4 percent). It is because the crime in Medan at that time was raised rapidly. However, the most unsafe city today has moved to Jakarta as the capital city of Indonesia.

Those are the facts of Medan. Besides Bali, you could also choose Medan as one of your travel destination. You know that Sumatra is one of big island in Indonesia that has much of tourism spots to visit.  In Medan, you could also try some of Delicious Traditional Foods in North Sumatra.