Indonesia is indeed rich in culture of its own people. Stretching from the East of Sabang until the East point of Merauke, all of the people have their own unique traditions and habits that can not be found in other areas. Like this one for example, Palembang city has some unique and different culture that you can see for yourself.

To make you more understand and entertained about the stuff we’re gonna talk about, we want to tell you first that we’re gonna give you 15 informations about Palembang’s culture. Yep, you heard me right, 15. So in this 15 list, we divide the topic into three main points, the traditions, habits, and also cultural ceremonies. We made 5 things per point, so you better take a good look of them. So, let’s start with the first one shall we?

First thing first to learn about Palembang, is the traditions. The traditions that really thick and rooting in the people’s lives. So, in Palembang, you can actually find many of them, but sadly some of them forgotten and left in the past. We’re gonna recover what’s lost, and tell you about 5 of them in the list of Palembang’s traditions. 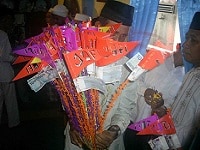 The child birth is one of the happiest moments in life. In Palembang, they “welcoming” the new born baby with this colorful and happy ceremony called Ngunting. Just like the other traditions in Indonesia about Aqiqah and naming the baby (if haven’t), you can see the people celebrate it with full happiness in their heart. In this tradition, firstly they will give these kind of flags, but with some money sticked on it.

The flags resembling the care and love of the families to give what the baby is needing in the present and also the future. They mean to provide the baby with full carefulness with action and also economically. By then, the baby hopefully can grow to be a wise man and also care towards the others. 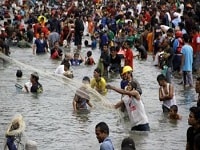 They catch the fishes with the chief of the village, and then bring the fishes into their own home. The little-medium fishes will cooked for families, while the big ones will be sold by the village chief. The village chief will sold the big fishes to nearest harbor or market, and then the profit is going to spent on public facilities like bridge and roads. 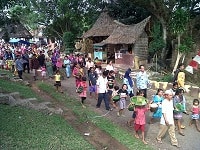 The traditions of Sedekah Rame is mainly done by the farmers on specific day, the starting day. They usually do the activity in the first step of the crops calendar, hoping their crops will grow larger and the live of the crops will be strong enough to carry on until the harvesting time comes.

So they will pray and burn the incenses and praying to the God, asking Him what they want, the good and healthy crops to harvest in the future. Even though this is very optional in farmer’s life, but many of them still doing it until now. 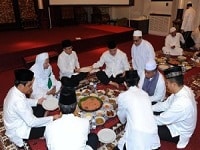 Ngobeng is actually done by the Palembang people when they’re eating something together with family, friends, or relatives. So, when they eat in this “Lesehan” style, they usually will passing the foods from one person to another. Not like other people in Indonesia, who take anything they want to eat in front of them.

So, this Ngobeng of course has the meaning. The meaning of Ngobeng is actually pretty simple, helping each other. With Ngobeng, the people who want to eat the specific food, doen’s have to stand up to get it or waling a bit far to reach it. Other people will help, with Ngobeng activity. 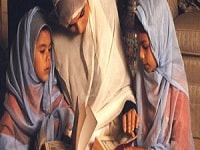 If the children can’t go sleep so easily and just start to cry and keep them self awake, then what a good mother ill do is singing a lullaby for them. In Palembang, the mothers will sing a song with religious, moral, and cultural value for the kids. But beside the mothers, any adult can sing it too, like the father if he wanted to do it badly.

With this lullaby, the kids will learn and feel comfortable to sleep in the same time, thanks tio the song that has so much value in it. But sadly, this lullaby tradition is indeed extinct. So many of them replace it with the kids song in this era of time.

People in palembang also have some unique habits like :

Yeah, one of their common habit is talking with loud voice, even the responded was up close. This habit may shock some of the outlanders, but it becomes a common thing when you already lived there for a long time. But still, it’s shocking.

You may find the same habit in the people of Surabaya though, which has maybe the louder voice. But even though their voices are loud, but they don’t angry of you and stuff. They heart is actually kind towards another.

Once finished eating, some of them left one food on the plate. Seems confusing indeed, but this habit is quite understandable if you understand. So, they do it on purpose not because they didn’t respect the foods, but to make them feel about what the other poor families out there feel.

They want to “give” them at least one food, after the responsible staff put the food in the garbage. So not only the poor, but animals out there can enjoy that single food too, in the garbage.

Not every man in Palembang, but many of them, can’t say this specific alphabet. You may now this as speech impediment, but in Indonesia we call this kind of stuff with “Cadel”. So, many people who can’t properly pronounce R, will use L alphabet instead.

Like many people in Palembang, which have the exact problem, even though it’s a bit funny fact. We still don’t know the origin of why many people of Palembang can’t say the “R”, but it’s actually an interesting fact.

One thing we’ll notice about them when we take them into restaurant is their skills. Yep, famous as the producer of the spicy sauce used with pempek, they an take a high level of spicy. SO, if you want to meet any challenger, best to look one from Palembang.

With this behavior, they’ll feel the foods that has the less spicy taste as a tasteless food. Because there’s no spices in it, they can’t feel anything.

Yes, exactly. Palembang is always completed with its traditional food, Pempek. This one is really delicious if you ask me, even you can find many variants of it out there. So, in Palembang, they say their daily life ain’t complete without the existence of Pempek in the kitchen.

Everyone loves it because it’s good, very delicious and nutritious. So, if you haven’t tried any of it, it’s better to do that at the Palembang city itself.

Now in the last point, we’re gonna talk about the culutural ceremonies in Palembang 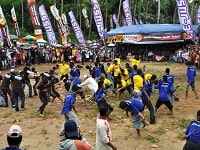 This is actually what you called a food war, but in the form of ketupat, typical Indonesian food. If you haven’t seen it somewhere, it’s actually the Indonesian most well known food. It made out rice and then covered with this some kind of leaf.

People in Palembang made the Ketupats and then starting to throw them when the time is come. Many teenagers love doing this kind of thing. It’s harmless, fun, and very satisfying and you can only find the exact ceremony only in Palembang. Totally fun thing to do in Palembang is at least is the thing you should try in this area. 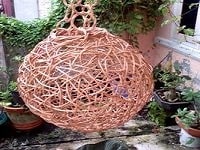 Selikur is like little ceremony, done one day before Idul Fitri. So in this “ceremony”, many people will participate in this activity. So they will add this one lamp in day one, and tarting to add another day as another day comes and so forth.

People creativity also increased by this stuff. Many people create the lanterns based on their creativity and ideas. There’s also a championship for this activity though that will make so many people join in. If you interested enough in this event, you can join them. You can add some colourful lamps and other ornaments in front of your house. 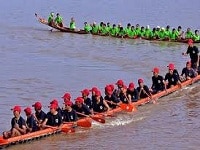 After the lamps ceremonial stuff, there’s also an unique race in this Palembang area called Bidar Boat Race. In this race, the contestants use this long boats to race against one another. The fastest to reach the finish line becomes the winner.

In this era of modernitation, the view of the race will become a unique and spectacular view you will not have in any other places. So while in here, be sure to capture the moments of joy and happiness that filling  the place. Now, it’s time to race ! Prepare your best crew you have, prepare your best boat to race, and finally go to this exiting race in Palembang! 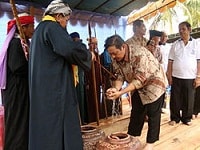 This ceremony is considered very sacred and also religious. Like we all know, we humans are full of sins. In this ceremony, we will clean our body in the Ramadhan month with the good smelling lemon water. Not for drinking, but to wash your body.

This ceremony usually done by chief, giving you the water to wash your hand and feet. After washing them with lemon water, you don’t have to clean it with the fresh water, because it’ll erase all the good smell of lemon water. So by preventing that, your body will stay good. 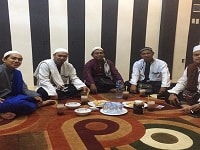 The Beratib usually done in Friday night, usually they will pick the right day of the month to do Beratib ceremony. The ceremony usually done by people in the village, usually by the adults and olds. Some teenagers rarely seen in this activity, because this ceremony is considered very religious and quiet.

With praising Allah SWT, they ask for frogiveness and show gratitude toward Him with prayers.It’s actually a really nice thing to see in these days, where people can still gathering in certain location, just for praying to God.

Then our list finished here. Hope you guys can enjoy and more understand about the cultures of Palembang. Happy reading!

Top 17 Festival in Lombok You Must Know