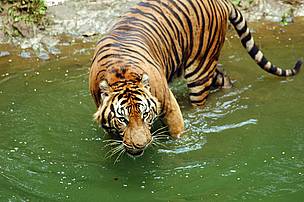 The Sumatran Tigers (Panthera tigris sumatrae) is a subspecies of tiger that are regarded as the last of its kind to ever existed in Indonesia.

Two of its relatives, the Balinese tiger and the Javan tiger had been lost of any existence trail in the nature upon where they live.

In the late 1970s, the population of Sumatran tigers are believed to range from about 1,000 individuals, then decreased to about 400-500 individuals in the early 1990s.

Based on data from the Ministry of Environment and Forestry (2007), the current estimate of the tiger population in eight areas that had been identified from the existing 18 district only about 250 individual tigers, while in 10 other regions the have not been analyzed yet. But experts believe the population of the Sumatran tiger is no more bigger than the estimate of the 1990s.

In the St. Petersburg Declaration on Tiger Conservation, they made a mutual agreement that the world will seek to doubly increase the existing wild population in 2022. An important role in the ecosystem for the tiger were clearly stated in the declaration, that this predator is one important indicator of a healthy ecosystem.

Destruction of ecosystems not only resulted in the extinction of tigers, but also the loss of biodiversity. Indonesia is included as one of the countries that signed the Declaration on Tiger Conservation in St. Petersburg, Russia in 2010. In fact, the Ministry of Forestry in 2007 and had made a Conservation Action Plan valid until 2017.

Sumatran tiger has the body relatively small compared to all the sub-species of tiger alive today.
Adult males may have a height up to 60 cm and a length from head to toe reaches 260 cm and weighing up to 160 kg. Tigers has an average length of 199 cm and weighing up to 92 kg. Sumatran tiger has the darkest color of skin among other tigers, its from reddish yellow to dark orange.

Sumatran tigers are on the brink of annihilation due to habitat loss that went uncontrolled, reduced number of prey species, and illegal hunting. A 2008 report released by TRAFFIC – a program of the WWF and the World Conservation agencies, IUCN, for the wildlife trade watchdog – found a flourishing illegal markets and also the open domestic market trade in Sumatran tiger body parts.

In the study TRAFFIC revealed that at least 60 tigers have been hunted each year in the period 1997- 2003. Decisive action taken to stop poaching and illegal trade of tigers must be done in Sumatra.

Sumatran tiger population is only about 500 that are currently living in the segments of mountainous rain forest, lowland forests, and wet lands. Most of this area is threatened by forest burning for agriculture and commercial plantations, as well as encroachment by logging and road construction.

Due to the fact of the loss of their forestry habitat, tigers are bound to enter a location near to people’s home and thus are often butchered or taken as pets because they strayed into the rural areas or as a result of accidentally encountering with humans population.

Riau Province is home to a third of the entire population of the Sumatran tiger. Unfortunately, although they are already protected by law, the tiger population has declined by 75% in the last 25 years. In 2008, approximately 195 Sumatran tigers left in the wild province of Riau.

Although there are action plans and agreements between countries, the reported death of Sumatran tigers continue to flood the media. Including conflicts with farmers in Jambi for the past two years at the expense of 46 tigers, as well as “mismanagement” at the Surabaya Zoo which eventually also make the tigers there to perished.

To determine what should be done in order to save Sumatran tigers from extinction, first we need to update the data and information about the tigers that need to be done, such as:

Tigers live in forest lowland tropical rain area. However, the tiger habitats are disappearing along with the reduced forest area to the entire island of Sumatra due to conversion of forest to oil palm plantations, commercial plantation development, settlements, roads that cut through the forest area and for other purposes. The condition causes the tiger habitat to become fragmented thus causing conflict with people.

The government, universities, research institutions, and NGOs, in fact can not remain silent to prevent the extinction of the Sumatran Tiger. Habitat protection and monitoring populations of tigers intensively continued in some pockets of the population that are a priority in Sumatra, especially conservation areas that provide a vital habitat of the Sumatran Tiger

The Tropical Forest Conservation Action for Sumatra, which is a program of collaboration between the Government of Indonesia and the Government of the United States in the conservation of the Tropical Forests in Sumatra is to encourage the strengthening of support and active involvement of the public, government and private sector in order for tigers to remain exist in nature.

This Foundation along with partners are working in the field to identify at least five important things that must be done to achieve the target of increasing the population of Sumatran tigers, as declared in St. Petersburg, namely:

Sumatran tiger (Panthera tigris sumatrae) is one of six sub-species of tigers that still survive to this day and is included in the classification of critically endangered species. Based on 2004 data, the population of tigers in the wild is only about 400 individuals only. As the primary predator in the food chain, tiger maintain populations of wild prey that is under control, so that the balance between prey and vegetation that they eat can be maintained.

Sumatran tiger face two types of risks to their existence: threatens by the illegal trade in body parts where they are bought and sold at high auction places on the black market for traditional medicine, jewelry, and decorations and they are losing their native breeding grounds due to the high rate of deforestation.

Indonesian WWF  is cooperating with the Indonesian government, including the relevants party that intimidates tiger habitat, local communities and conservationist organizations to keep Sumatran tigers from elimination. Then, there are several activities from WWF to protect Sumatran tigers, such as: