Transportation has many undergone in any developments. Indonesia, country which has a rich potential of resources, has several unique traditional transportation. Then, in several province, people still use them for daily transportation.

Java became the center of civilization development of the archipelago since the 4th century. Then, horses have been used to traveling because of the strength and speed. Moreover, developed transportation also use the services of a horse. On the other hand, Indonesia as maritime nation, boats is an important transportation and actually use for communication since the beginning of civilization.

Meanwhile, the existence of transportation from the past still encountered until now. Even though only in small quantities. There are several traditional transportation in every region of Indonesia.

Delman means Wagon. Wagon uses horse as driving engine. It made by wood with two, three, or four wheels on left or right side.

Delman often can be find in capital city such as Jakarta, Surabaya, Semarang and other provinces.Then, the passengers sit opposite to each other and a cab man to lead the horse way.

On the other hand, the name of Delman came from inventor’s name, Charles Theodore Deeleman. He was a lithographer and engineer in Netherlands East Indies era. Netherlands call this transportation with dos-à-dos. The literal meaning of French language means sit back to back. Meanwhile, there are several parts of Delman, such as:

[tr][td]2[/td] [td]Wheels[/td] [td]The shape is round with radius made of wood and iron. Nowadays, It uses car or motorcycle wheels[/td][/tr]

Nowadays, Delman used as transport environment within a short journey or in the countryside. However, some areas especially in tourist areas, Delman allowed to operate by follow the rule of urban cleanliness. 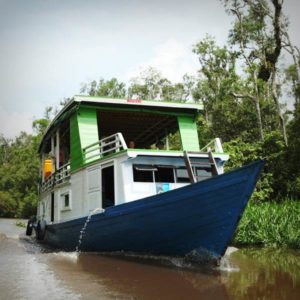 In central Kalimantan, People usually use boat name “Klotok”. This boat made of wood and use diesel engine power for accommodate approximately 5 to 30 people depend on the size of the boat.

Then, the large boat equips a steering wheel similar as four-wheeled vehicle and driven by boat driver. while there are other person in charge of directing the propeller blades and dispose of river water.

Meanwhile, the passengers usually sit in the front row and the middle of the boat. Then, the luggage placed on the back.

The big size boat has a roof made of plastic attached to curved metal frames from left to right side. It usually used by company employees who are travelling down the river from up to downstream. 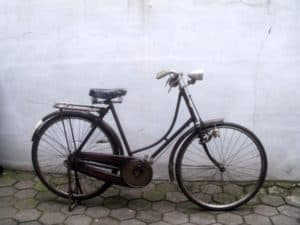 Onthel is bicycle often called as camel bike and kebo bike. It has a tire up to 28 inches which used by mostly people in 1970 as transportation. Then, in several areas of Sumatra island, Onthel known as Kertangin.

On the other hand, the name of Onthel is from the word “Mengonthel” means paddling. It use to move the bicycle with do pedal a few times according to speed. However, the speed of Onthel is slightly slower than other bicycles. In 2000, Onthel began to turn into antiques and unique then became hounded by collectors.

Onthel has a differences between men and women. Onthel for men has transverse barrier under the saddle, while for women has a long iron like a bow under the saddle. Nowadays, the existence of Onthel are irreplaceable with modern transportation. Onthel now often can be find in Fatahillah square, North Jakarta.

There are several types of Onthel:

Becak means pedicab with a three-wheeled of transportation commonly found in Indonesia and several countries in Asia. It can bring only for two passengers and one driver.

Becak usually can be find in several areas such as rural, villages or other small streets. Many people especially women uses this to carrying out their grocery from the market.

Becak became pride in few decades between 1970 to 1980. In that era, there are not a lot of public transportation in major cities of Indonesia. Then, the advantages of using Becak is environmentally friendly and does not cause noises like a motorcycle.  Becak also does not exhaust gas stream of carbon monoxide emissions that often cause negative impact of environment.

On the other hand, the disadvantages is low visibility of driver can cause an incident for passengers. Becak also known as transportation with minimal safety indicators. Moreover, Becak can causes congestion because the average speed is only 10-15 km per hour. It considered to be very slow compared to motorcycles. So, Jakarta, the capital city of Indonesia, formally prohibit the existence of Becak. The official reason is there are human exploitation for the driver. 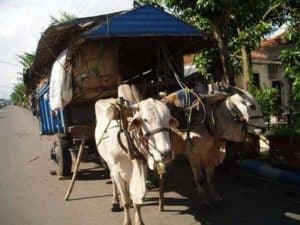 Cikar is traditional transportation for farmers. It still used by some farmers in Wadung village, Tuban city, east Java for help in rice paddies and fields. Cikar also used for transport crops and fertilizer.

Cikar in general is the first transportation belongs to the Department of Motor Transport of the Republic of Indonesia (DAMRI), which plays an active role when the struggle for independence in 1946.

For some people, especially in rural, Cikar still used as transportation to pass by in hardest area even for trucks. Thus, there are steep rocks or natural conditions.

Then, Cikar made nearly 90 percents from wood. It completes with two wheels connected crosswise and the carts pulled by two cows. Meanwhile, the wheels made of wood with rubber tires in edges. On the other hand, Cikar generally drawn by two cows and used to transport the load of goods, such as agricultural produce or people. 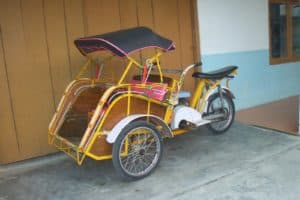 Bentor is transportation which combination between pedicab and motorcycles. Then, often called as tricycles. It can be find mostly in Gorontalo, Sulawesi island.

North Sumatra is other province which still uses Bentor. However, there are differences between North Sumatra and Gorontalo.

The driver in Sumatra drives beside passenger side, while driver in Gorontalo sit behind passengers. it can bring more than two passengers.

Bentor uses three-wheeled and for build one Bentor needs costs around 2,5 million to 5 million rupiahs. On the other hand, the construction of Bentor is quietly unique. Head of motorcycles is replaced with pedicab while the back seat still remained.

Moreover, The passengers will sit on the train, and other can sit in the driver’s seat. Even in some places, Bentor can carrying up to seven people. Mostly for carrying the students.

On the other hand, the existence of Bentor can compete other public transportation. Thus the strong design and can pass the distance up to hundreds kilometers. 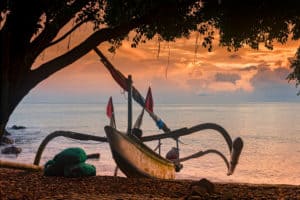 Jukung is water transportation mostly can be find in South Kalimantan. It often used in Barito and Kahayan rivers. The characteristic of Jukung lays in it making process. The making process of Jukung is different than other traditional boats.

People in Kalimantan make Jukung with combustion system cavity of round logs. Moreover, the manufacture of this process has been 2500 years. So, Jukung is one of the oldest traditional transportation which still used until now with no even one changes in the process of making Jukung.

On the other hand, Most of Bali boats often called Jukung. The difference between Jukung Bali and Kalimantan lay on their shape. The shape of boat is similar with snout of fish and can be found in almost all the beaches of Bali well in North Bali, Bali Barat, South Bali and the east coast. Meanwhile, there are 3 types of Jukung boat in Kalimantan. Such as:

Boats made of split logs  and then formed a boat with the Beliung ax.

Formed without splitting the wood, but opened with combustion inside the hollow trunk. this kind of Jukung boat is simple type and mostly sails on the Barito River.

Made of ironwood, from the body to the frame and the wall of the boat. The size is quite large than others. 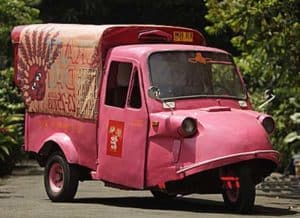 Bemo means ‘tricycles’ with three-wheeled used as public transportation in Indonesia. It began to used in early 1962. Bemo made by a Japanese transportation company, Daihatsu. Then, it can carrying out up to seven passengers in one go.

Meanwhile, south of Bolaang Mongondow city in south Sulawesi use Bemo as main public transportation. Many people there love to use Bemo because the cheapest price and help activities a lot. 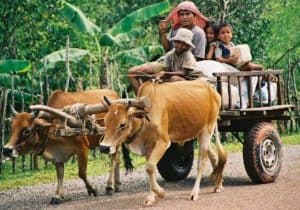 Pedati is a kind of transportation with two-wheeled and pulled by cow or buffalo. The boards and uppers are painted with red, yellow, black, and white colors.

Then, the wheel made of wood and iron. It pillars can be assembled with a sturdy, not easily separated and able to carrying heavy loads. So it helps a lot the people especially in rural areas in their works. 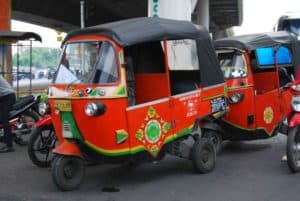 Bajaj commonly pronounced as Bajai, is three-wheeled vehicles known as tricycles. It widely used in Jakarta. Bajaj known to have come from India.

The name itself is actually come from India transportation company, Bajaj Auto. The passanger of Bajaj actually up to three. Two for adults and one for children. However, the sound of Bajaj is deafening.

One of the main problems of Bajaj is contains high exhaust emissions due to use 2-stroke engine and does not meet the requirements of EURO II exhaust emission prevailing in Indonesia since 2005.

Moreover, the sound of 2-stroke engines are noisy also getting increasingly considered intrusive until then Jakarta Provincial Government to think of alternative transportation from bajaj. Then, the existence of Bajaj threatened. Jakarta government had offered a new transportation alternative called “Kancil”. Many Bajaj driver rejected because the price up to 30 million rupiahs per unit. So, government eventually chooses to keep the three-wheeler, but with the new 4-stroke engines are quieter and environmentally friendly. 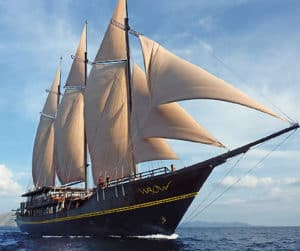 Pinisi is traditional sailing boat from Indonesia. It comes from Makassar, South Sulawesi. These ships generally have two main masts and seven sails. Three on the front end, two in front and two behind. On the other hand, the fame of Pinisi have been heard around the world. Pinisi already sailed around since 14th century. It explored the oceans around the world. The process of ship building is special. This vessel made by the expert manually using hands without any help of modern machines.

All parts of the boat are made of wood. Although only use wood, the boat is able to withstand the brunt of the waves and storms on the oceans. Moreover, Pinisi is one and only large ship from ancient era which still produced today.

Then, the vessel measuring about 15 to 40 meters. It depend on the size. One Pinisi can be done by expert hands as many as 10 people led by one person. There are several types of Pinisi. Such as:

Nowadays, Pinisi changes into commercial and luxury yacht expedition financed by local and foreign investors. It contains with a luxurious interior and equipped with diving equipment then  strengthened by modern techniques. 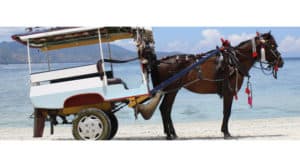 In the development, Cidomo not only serves to transport paddy but also as an introduction to the citizens of the fields were located far from residential areas. Cidomo can be find between cities and villages in Lombok.

Then, There are several places such as traditional markets still owned Cidomo as public transportation. It can bring the passengers up to seven people. The shape of Cidomo similar as Cikar. It uses two-wheeled. On the other hand, the name of Cimodo already popular in Lombok. Thus in addition to logical, philosophical, and economical aspects. It can reach environment with friendly way. 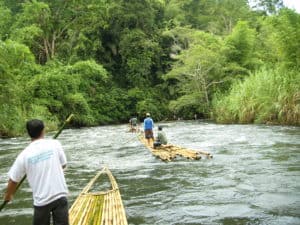 Rakit is one of traditional boats.It means raft and often used for people for pass the river. The arrangement of raft is flat and can travel on water.

Rakit is the basic design of boat. Then, Raft keep afloat uses light composition materials such as wood, barrels, and water pump.

Raft still using manual labor or human as their driver. So, it takes longer to reach destination. However, Rakit is free from bad air population. On the other hand, Rakit uses as alternative traditional transportation for children in inland areas.