Do you know Liberty statue? Liberty is a symbol of United States which offers friendship to those who visit United States. Surprisingly Indonesia also has several iconic sculptures/statues that you need to know. 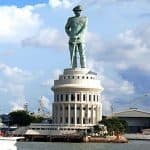 This gallant sculpture’s height reach 30.6 m and it stood on a building. Jalesveva Jayamahe reflects an optimistic Indonesian next generation to achieve the national objectives. 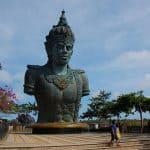 This sculpture is located in Unggasan Hill, Bali. The local government take a good care of the location where this sculpture belong and make it as a cultural park which becomes an icon as Bali tourist attraction. The sculpture is forming the God Wisnu as a Sthiti or a caretaker riding an eagle. You can see this sculpture even from distance up to 20 km, made of a mixture of copper and steel.

This sculpture conveys a story about an eagle who sacrifice itself to protects its mother from slavery under God Wisnu’s protection. 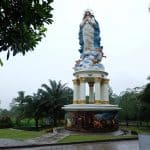 The position is facing the sunrise direction which tells that The Virgin Marry will enlighten human, it also becomes the symbol of peace. This statue is made of silica sand material with resin mixture, and steel frame.

If you take a look at the detail, there are batik pattern in the hand and her cloak. Why is batik very important for Indonesia? you may read it here Importance of Batik Indonesia 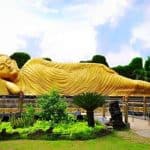 The biggest sleeping Buddha sculpture in the world is located in Mojokerto, East Java which mostly known as the Sleeping Buddha statue. It was objected to serve the Buddha community at the first but now this location becomes a tourist site as well.

The golden Sleeping Buddha that has 22 m length, 6 m width, and 4.5 m height is created in 1993. The message that is shown is about the death of Siddharta Gautama in sleeping position, the bottom part shows a relief about His life, and karma law.

There are many visitors who come to see the third biggest Buddha sculpture after Thailand and Nepal, and the visitors are either students or people as general. So it means that Buddhism has great influence in Indonesia, find it out on The History of Buddhism in Indonesia 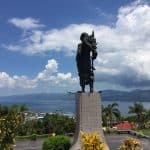 Ambon also well-known for its Martha Christina Tiahahu sculpture which stood in Karang Panjang. You can add this location as an alternative site to enjoy your free time especially those who want to enjoy Ambon scenery.

Furthermore, Christina was a brave woman fighter who fight to against Dutch colonialism in Indonesia, when the weapons are running out she bravely threw stones to the Dutch troops.

For the sake of his brave action a statue of her holding a spear is created to remember her spirit. Indonesia has many national fighters in the past, other inspiring heroes can be read here about  Indonesian Heroes 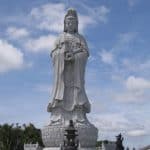 If you traveled to East Sumatera this destination could not be skipped, you can find a sculpture of Kwan Im (The Goddess of Compassion). This is the highest Kwan Im sculpture in Southeast Asia with height 22.8 m, located in Avalokitesvara Temple.

Moreover, it required 3 years establishment process and officially inaugurated on November 15 2005. In the front of the sculpture there are a big bell which will make you amazed.

Temple is supposed to be a worship place for the Buddhist however due to its beauty, this temple is open for public as a tourist destination. 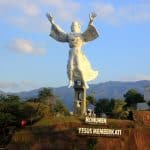 This is actually a monument of Jesus which is located in Manado, Manado people are mostly Christian. The statue is established at the altitude 50 m above the soil and made of 25 tons of iron fiber and 35 tons of iron and steel.

On the other hand, this sculpture becomes the new icon of Manado and considered as the second highest Jesus Christ sculpture in Asia.

Jesus faces East direction in a position as if He is giving blessing to Manado people and its surroundings. Not only that, this sculpture is a symbol of religious harmony. Indonesia is a plural country, see Religious Diversity in Indonesia

You may want to read : History of Christianity in Indonesia 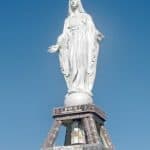 Maumere is city in Flores East Nusa Tenggara which is not only rich with natural tourist attractions, this city also considered as favorite religious destination. Located in Nilo this sculpture is made of 6 tons bronze and being established in 2004.

Then, Christian usually visit the sculpture for pilgrimage activity and to seek for inner peace. This sculpture stood at the altitude of 1.600 m above the sea level, directly facing the Flores Sea.

The location offers an amazing view above so not only local but foreigners are visiting this destination. 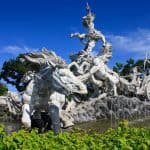 Ghatotkaca Statue is located in Bali which is inaugurated on October 31, 1993. The creator I Wayan Winten made this sculpture as an attraction to be decorated near the Ngurah Rai International Airport but the local people believed that this statue is a protection.

Gatot Kaca itself is a gallant and fearless knight. Meanwhile this statue conveys a story about a huge battle between Gatot Kaca and Adipati Karna on Bharatayuda’s War.

Meanwhile, even though he is died, his spirit deserves an admiration therefore this statue is created. 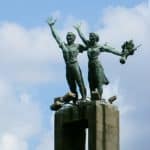 This welcoming sculpture is located in the center of Jakarta, there are a couple holding flower and waving hands to the North.

Historically this monument is built when Indonesia became the host of Asian Games in 1962, President Soekarno initiated to establish a welcoming statue as a symbol with height 17 m.

The creation process is a year and it is inaugurated in 1962.Right after reformation era, this location is popular to be a place to do demonstration, car free day and car free day.

The sculptures mentioned above have its own characteristic, message, and historical background: related with religious aspect, history, national heroes, and even a symbol or a city icon. Interesting, is not it?

15 Popular Sports in Indonesia You Must Try