Indonesia is rich with tribes and customs therefore Indonesia has thousands local culture heritage which needs to be preserved. Cultural education can be done simply by spreading information related to the local cultures such as traditional foods, weapons, customs, dances, costumes, etc. The articles below will be an important information about the folk dances in Indonesia. 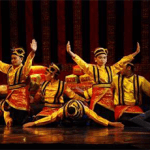 This is one of the Indonesian folk dances which seized the world’s attention. Saman Dance which comes from Aceh. This folk dance is named after its creator Syekh Saman a religious scholar from Gayo Tribe in Aceh.

This dance is interesting because it is done by group of people in sitting position and the highlight lies in their hands’ motions and heads.

The dance motions must be synchronized with the music meanwhile the tempo of the music will be getting faster. 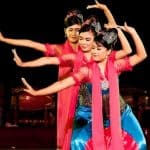 Jaipong or jaipongan is a traditional dance which is found in 1960s in West Java. This dance becomes popular on 1970s until now because the dance is not that difficult because this folk dance can be done spontaneously. The values of jaipong is as a media to bond the friendhship between Sundanese.

This folk dance becomes more popular because it is performed during welcoming the guest who comes from abroad to Indonesia. The objective is to symbolize friendship.

you may also want to see : Javanese Traditional Dance 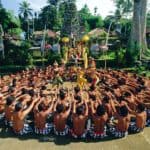 Bali is the most most popular tourist destination in Indonesia. Besides of its tourist attraction places, Bali also have an interesting folk dance called kecak dance. This dance is done by group of males which sit in a circle and shouting “CAK” several times and raising both hands.

On the other hand, song of this Kecak Dance originated from Sang Hyang Dance Ritual. Moreover, it can not use any musical instruments on it. Only using the sounds of bell worn on foot dancers. It portrayed the characters of Ramayana.

Those movements are used to convey a story, Ramayana is the center of this folk dance. you may also want to see Traditions in Bali 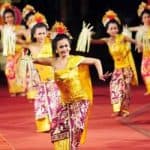 Another popular folk dance from Bali is pendet dance. Pendet dance has been stealing the tourist’s hearts, even some tourists are coming to Bali to join a course to learn pendet dance. This dance conveys a story about the descent of Gods to the world. It was performed during worship in the past.

The highlight of this folk dance is eyes, the dancer’s eyes are moving to left and right rapidly. Still embracing the religious values, this dance is now can be performed on welcoming ceremony as well. 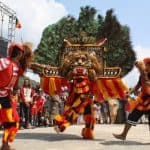 Reog ponorogo is a popular folk dance from East Java especially Ponorogo district. This folk dance is related closely with supernatural things. This folk dance use barongsai or la big lion’s head which weight dozens kilogram and the dancers are carrying that mask by teeth.

This dance consists of 2-3 opening series and the last stage is the dancers carrying the lion’s head, it is the highlight of this folk dance.

Reog Ponorogo usually be showed when there is a big cultural ceremony in Java Island, especially in East Java. Moreover, it recognized as one of aesthetic Indonesian Heritage in world stage. 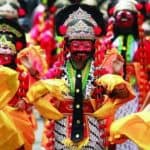 Anothe traditional dance from West Java is mask dance from Cirebon. This dance was used to spead islam religion by the religious scholars in Cirebon and now it is being an entertaining dance in the palace. This dance can be performed by an individual or by a group.

This dance symbolizes some of life aspects such as leadership, wisdom, love, and even anger. Furthermore, this kind of dance also has philosophical meaning. It kind of symbol as universe creation which is built when Hindu-Buddhist belief still have a high power of influence. Then, it embraces emanation system that said there is no spaces between God and creature. 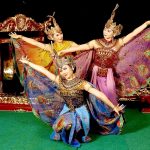 This dance also originated from West Java, this dance is influenced by peacock’s life and being performed on stage. Peacock is expressive especially when it comes to love affair, according to this dance a male peacock will spread its tail feathers to attract the peahen. The music also conveys a situation, the wooden part will be hit loudly to tell that a pair of peacock is flirting each other. 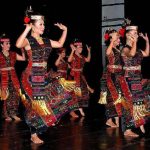 This dance comes from North Sumatera especially from Batak Tribe. This dance is accompanied by gondang music, the music and the dance movement is nseparable. Not only as an entertaining media, this dance is also used as communication media between the dancers and the audiences.

Tor-tor also performed during ceremony or ritual  to respect the house host, the ancestors’ spirit, audiences, and God. On the other hand, Despite of Batak which is one of tribe in North Sumatra Island, and have so many traditional art, they also have delightful and delicious Traditional Foods in North Sumatra. 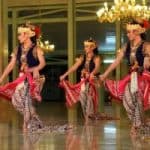 Srimpi is a repertoar classical dance from Central Java. This folk dance shows a graceful motion which reflects modesty, a soft soul, and gentleness which accompanied by gamelan music. This folk dance is special and sacred even it was only selected people who can perform this dance in the past.

The dance movement in srimpi dance is dominated by hand, feet, and head movements. The dancers are performing it gracefully and sometimes playing the shawl which is tied in their waists. 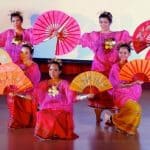 The people in Gowa South Sulawesi has been performing this creative folk dance using fan. This dance is performed by girls who play with fan following the rhytm. The soft movements reflecting the Gowa women who is graceful, obedient, humble, and respecting men.

The dance consists of several stages; the dancers are sitting in the beginning and the ending, the clockwise round movement tells the life matters, and up & down movement reflecing life cycle.

This traditional dance is originated from Padang West Sumatera. In the past this dance is performed to convey grateful feeling after harvest but now this dance is an entertaining media. The dancers are placing plates in their palms and they swing it rapidly.

The dancers are wearing a ring on their fingers so there will be clinking sound produced when the ring hits the plate.

You may also want to know about History of Plate dance which has a long history even from Indonesian kingdom existed.

Furthermore, here the performance of Saman Dance you can see which full of Indonesian cultures on it.

Indonesia has hundreds of folk dances which spreads in each provinces and those are treasure for Indonesia. The next generations should get better socialization about traditional dances so they will know how rich Indonesia is in terms of culture.

15 Famous Plants in Indonesia (#3 is Exotic)

25 Most Beautiful Lakes in Indonesia – Fascinating