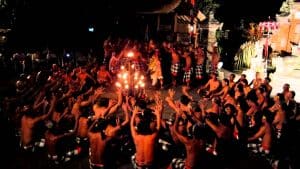 Kecak Dance is very popular in Indonesia. The Kecak Dance is one of Bali’s most iconic art performances. If you hear people yell “cak-cak cak-cak” it tends to Kecak Dance. If you go to Bali, you can find this dance easily. Watching Kecak Dance become Traditions in Bali when you come over. (read also: Barong Dance in Bali)

The Kecak Dance perform at night, and Uluwatu is the best and famous place to enjoy the sway. The performance consist with 20 or 30 people. When the dance begin, there’s no instruments playing. (see also: Traditional Songs of Indonesia)

Moreover, the unique one is the dancer try to imitate the gamelan sounds. The choir will following by 20 or 30 or maybe 100 hundred dancers in the area. (see also: Saman Dance)

Usually, the Kecak Dance entrance ticket already included while you book an entrance ticket to Uluwatu Temple. But if you won’t to go to Uluwatu Temple, it’s okay. You can buy the ticket separately. The Kecak Dance shows everyday in every single night. But  a day before Nyepi Day and when its Nyepi Day, the stage will be close. But don’t worry, after that, the stage will be open like usual.

You’ll never ever regretful when you watch the dance. Further you can watch the Kecak Dance and enjoy the sun down around in Bali’s South Peninsula area. So, it’s gonna be a good experience ever, isn’t it? The entrance ticket between adult and children are different. For adult or people above 10 years, the ticket price will be Rp 100.000 each. And for children between 2 – 9 years, the ticket price will be Rp 50.000 each. That ticket price apply when you buy on the spot. To grab the cheapest entrance ticket, you can buy online. If you guys think the tickets price are expensive, you got yourself wrong. The bucks you spend is totally worth with the show. Swear!

The History of Kecak Dance 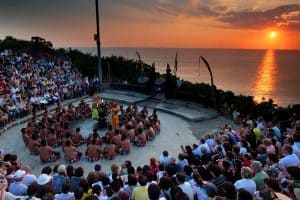 The Kecak Dance is very special because the uniqueness. To accompany the show, the dancer try to make a music themselves. They use their own voice to create the gamelan sounds.

Meanwhile, to make it looks easy, they’ll like to sitting in concentric circles, swaying, then stand up, and laying as the story develops. To make the show more dramatic, there’s a story teller who telling the unfolding tale. The Kecak Dance based on the Ramayana story, which well-known as the most famous in Hindu epic story. (see also: History of Plate Dance)

To express the story, not only by dancing, but also by carving and painting. Prince Rama, that’s how they called a man who heir to the throne of Ayodya Kingdom.

Then, his wife named Sita have been banished from the Kingdom by tricky way of Rama’s stepmother. But it’s not make sense. Rama and Sita still come along together. The story begin since both of them try to accompany Rama’s brother named Laksamana to the forest of Dandaka. (see also: Ngaben in Bali)

In the forest, the trio observed by the demon Rahwana. By distance, he lusts by Sita’s appearance. Therefore, Rahwana try to seize Sita from his husband, Rama. Thus, Rahwana sends his prime minister named Marica to kidnap her. Marica’s magical power make her turns to be a beautiful golden deer. Marica go to the forest to look for the trio, especially Sita. In a while, Sita’s fascinate by the beautiful golden deer and ask her husband to catch the deer. Rama obey his wife demands, then he go to chase after the golden deer.

Before leaving, he asks his brother to protect Sita from danger. Not long after, Sita hears there’s people crying and she thinks that is Rama, her husband need a help. So, she asks Laksamana to go after Rama. With a great reluctance, Laksamana go after his brother but before Laksamana leave, he draw a magic circle on the ground. He asks Sita to sit in the circle and not go around or leave the circle before he and Rama coming back. (see also: Balinese Dance)

Thus, Sita left alone and there’s no one with her. Rahwana start his tricky way to kidnap Sita. He turns into a priest and beg Sita to hand him some food because he feels starving and powerless. Sita with her favor finally step out from the circle and she falls by Rahwana trick. When she step out, Rahwana take her and bring her to his palace. He tries to seduce Sita as best as he can, but he got no response. Sita ignore him. In the palace of Alangka, Sita falling to pieces. Her heart broken when she admitting her fate by Rama’s niece named Trijata.

Therefore, Rama engage with his niece, prove by the ring. Thus, Sita give her hairpin to Hanoman and ask him to give it to Rama. Purposely to make Rama know that she still alive and need rescue. Hanoman do his tasks very well. (see also: Bali Facts)

The hairpin and Sita’s letter accepted by Rama. He tries to look for his wife. In his way, his son named Meganada come and ask him for battle. Meganada use his magic power to truss up Rama and Laksamana in ropes. Shortly afterwards, a Garuda bird, known as a  good friend of King Dasarata help Rama and Laksamana for freeing from ropes. Thus, Rama, Laksamana, and a Garuda bird go after and try to rescue Sita. But Meganada come along and stop them. The war begin but in the end, Rama succeed to defeat Meganada.

The Perfomance of Kecak Dance 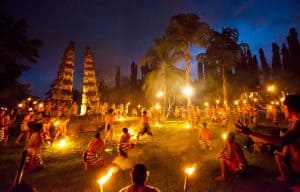 Of course, Kecak Dance performance try to tell about the history itself. The vital music make by the members of dancer. They try to make their own music. Every person have a role while the show begin. Some do acting as a suppressor, some do acting as solo singer, and one become a story teller. The whole performance following by gesture and relax movements. The main priority of the shows are the history and the sound mix “cak-cak cak-cak”

The Development and Where to See of Kecak Dance 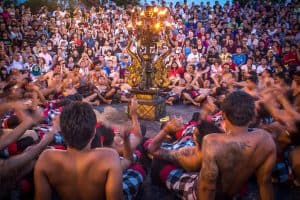 The visitation in Bali certainly will not complete without watching the most captivating dance. Kecak Dance become an artistic masterpiece in drama musical and in the form of a dance. The dance undergo changes already.

The difference between 1970’s and nowadays show up by the performance. Nowadays, the show not only perform the Ramayana’s story but also the other parts of Ramayana itself. Therefore, people get get more attention to it. As a masterpiece, Kecak Dance develop already not only in the Uluwatu, but also in the other regions in Bali.

The members spreading to another group to create dozens of Kecak Dance performance. In the school and in the governments, Kecak Dance also held as a festival. The trade record of Kecak Dance happened in 1979, when it consists with 500 people. But the trade record broken in 2006, when Tabanan regency organize 5.000 people as a dancers. WOW!

Watching Kecak Dance may best ini Uluwatu. Thrn you also can catch a dramatic sunset must be a good experience ever. One thing you have to remember is don’t bring too much cash or wear jewel. Being low profile as well is necessary. Uluwatu well-known as a home for hoard of grey long-tailed macaques. They known as a cunning and swift pickpockets. Keep your valuable stuffs into your bag until you enter the theatre. Make a note, the dance performance will start on 18:00 WITA or 6 PM everyday.