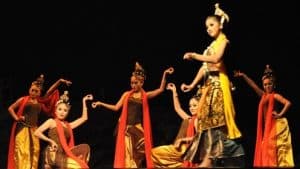 Javanese is a rich culture in Indonesia. The culture become the Largest Ethnic-Groups of Indonesia. Javanese take plenty parts. Talking about Javanese, the truly state of the culture is on Central Java. Nonetheless, their culture and Javanese Traditions already spreading in every province in Indonesia. Even my neighbor is a Javanese. You can find them all easily in every state in Indonesia.

Beside the prudishness, Javanese also popular with the dance. Yup, it is a traditional dance. Talking about traditional dance, what come pass your mind? It is not all about the traditional clothes but also the movement while dancing. Every single dance had their own movements. The movement either difficult and easy, depends on what dance is related to. 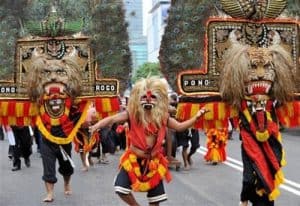 Reog Ponorogo is one of the famous dance in Indonesia or maybe for tourism. This dance is so familiar for Indonesia people. The Reog Ponorogo Dance basically come from East Java. While performing the dance, maybe you’ll kinda bore because the duration is quite long. But it doesn’t matter at all if you like art. As we know, sometimes art is truly boring but when you love it, you’ll never feel that bored.

The dance present by 8 people, either man and woman. In fact, this dance tell us about Prince’s struggle to get his crush. His name is Prabu Kelana Sewandana. One day, Prabu feel so in love with the Princess named Dewi Sanggalangit. Then the Princess ask the Prince to create an art. Voila! The Prince made it! When you see this dance at glance, it seems like Barongsai. Wearing a massive mask and the weight of the mask itself for about 50 kilograms. Really? 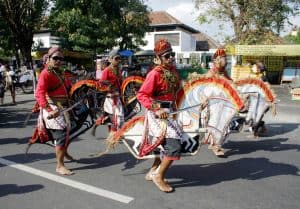 The next is Kuda Lumping Dance. This dance have their own song also named Kuda Lumping. The dance coming from Central Java. While performing, the members using kind of horse doll as a complementary. The movement is freely. It means every member don’t have to following a course.

Because they all can create their own movements, following the music. During the dance performance,  “offerings” must be available. In case, all the member will be possess because the demons come through the members. 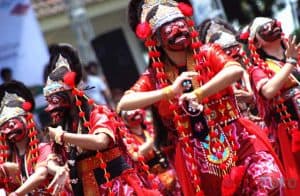 Now, move to Cirebon, West Java. There is Topeng Dance or Mask Dance, but not a masquarade. The dance successfully well-known by people because there’s a story in the past. The story is about a defeated Prince named Sunan Gunung Jati. From Cirebon, rapidly this dance spreading to Losari, Subang, Jatibarang, Brebes, and Indramayu.

The mask distinguish into 13 types. They all different one to another. Every single mask have their own feature and shown a different characteristic. While performing this dance, accompanient musics mus be exist. Such barlen, rumyang, pamindo, and gonjing pangebat. (See also: Indonesian Tribes) 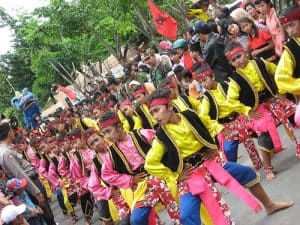 Glipang Dance well-known from East Java. The dance can performed by a man or woman, but mostly a man. The dance performance showing us the story in the past. There was a man named Seno Truno work as a servant for Deutch.

However he’s force to work over again till he decided to retire. Then he created a dance named Glipang Dance to tell about his truly life. The motion of the dance looks like a horse ready to attack someone. The motion issued unpolite. 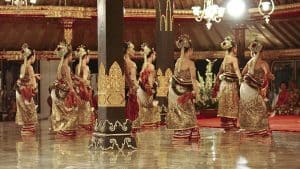 Bedhaya Ketawang divide by two words “Bedhaya” means “woman” and “Ketawang” means “sky”. In the full meaning, Bedhaya Ketawang is woman from heaven. The dance only perform in formal occasion and purposely to amuse people.

From the story in the past, Bedhaya Ketawang is a dance related to Nyi Roro Kidul. While the dance begin, Roro Kidul happily would come and dance, following the music. The accompanient instrument is gamelan. 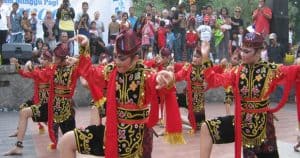 Coming from East Java, Remo Dance purposely to welcome a special guest. This dance created because in the past, it’s a must people able to dance. Mostly, the dance members are a man. But time flies, woman dancers are possible. The dance will perform in every art exhibition.

There’s one thing special through this dance, because the clothes is different in every performance. There are Surabayan, Malangan, Jombangan, and Sawunggaling cloth. Gamelan is the accompanient instrument. 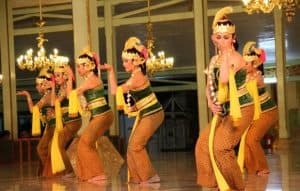 Gambyong Dance come from Surakarta, Central Java. The word “Gambyong” is taken from the fame dancer in the past. The dancer has a good voice and an elastic body. That’s why this dance rapidly make people amaze and become popular. The dance only performing when it’s time to start the harvest period. Talk about the cloth, it’s dominant with yellow and green colour. But these days, there’s no rule which colour should wear on. 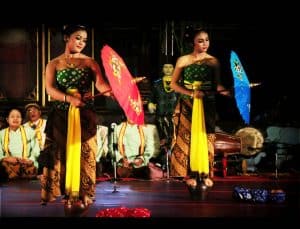 And the last one is Bondan Payung Dance from Central Java. At glance, this dance look like Japanese woman, which carry an umbrella to cover themselves. Beside an umbrella, the dancer can use a doll or maybe a jug while performing.

Meanwhile, the movement isn’t difficult at all but there’s a tense session when the dancer try to climb a jug and the jug cannot be broken. The whole exhibition looks fascinating and unique. The accompanient instrument is gending.

There are several other Javanese traditional dance from Indonesia, as follows:

The popularity of Wayang Dance as same as Wayang Story. Because the background coming from the Wayang Story itself. The theme in every performance must be different. The theme will determine the movement. If the theme is about war, the movement must be rapid, and the opposite. Nowadays, Wayang Dance divide by 3 types, such: Solo Dance, Pair Dance, and Mass Dance.

This dance coming from Sunda, West Java. “Tilu” means “three” because throughout the performance, there must be three musics. In the past, the dance will be perform in harvest period. Purposely to thanked Sri Godnesses because she blessed the plantation from the beginning till the end. But that’s in the past. These days, this dance perform only for entertaining. The accompanient musics are gong, kempul, rebab, and gendang.

Serimpi Dance come from Yogyakarta, Central Java. It’s perform by a woman. The motion is slowly and show affection. But one thing, issue about Mystical emerge during the performance. By the motion, beholder feel like they are being hypnotic and there’s some power guide them to another life. Is that true? You can improve the truthness by watching the Serimpe Dance exhibition.

Back to Indonesia Java, exactly in the West especially Kuningan. Buyung Dance means a woman who use clay to take water. The unique fact, the dancers consist with woman who bring jug made from clay on their head throughout the performance. But remember, the jug cannot be fall. If it is fall, the whole performance will be flop. The motto inside Buyung Dance “where’s the earth step by, there’s the sky upheld.”

The inspiration of Merak Dance is the peacock. Peacock well-known as a beautiful pet in the world. The wild wings make them beautiful from behind. Further, peacock represent a crown in the past. The movement as same as peacock wings. The members just move one to another show the elegance. Every member wearing crown and pair of cloth represent peacock wings. This dance is the pricey dance because a pair cloth is about 1-2 millions Rupiah.

That’s all 15 Javanese traditional Dance. Have you attend one or two traditional dance exhibition? If you are not even once, please make your time and watch one of them. It’s important to preserve Indonesian heritage.