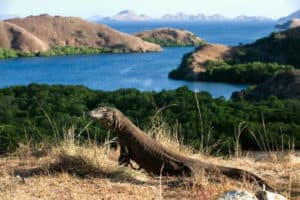 A volcanic island inhabited by 5,700 giant lizards, flanked by Sumbawa and Flores Islands between the border of East Nusa Tenggara (NTT) and West Nusa Tenggara (NTB), and administratively into West Manggarai Regency, NTT Province. No other, the name of the place is Komodo Island National Park. Here is the history of Komodo Island.

This is the story of a dragon. Not just a legend, but really a dragon which still inhabits the eastern and central islands of Indonesia. The giant of this reptile world has a reputation as a top predator in its class. Since long time on the island of Komodo, ranks of the Flores Islands, Indonesia, has emerged the story of a giant dragon. Many sailors tell that this dragon is more like a frightening monster.

Its large tail can knock a buffalo with just one swish. The jaws are big and strong, to the point of swallowing a boar in one motion. And they believed that from the mouth of komodo always sprayed fire. The story is widely circulated and had attracted the attention of many people. But no one ever dared to approach the island to prove it. Until the early 1910s, reports of the Dutch-based fleet unit cluster headquartered in Flores about a mysterious creature suspected of “dragons” inhabit a small island in the Lesser Sunda Islands region (now the Flores Islands, Nusa Tenggara).

The Dutch military sailors reported that the creature probably measured up to seven meters in length, with a gigantic body and a mouth that was always spraying fire. Lieutenant Steyn van Hensbroek, a Dutch Colonial Administration official in the Flores region, heard this report and the stories surrounding Komodo Island. He also planned a trip to the island of Komodo.

After arming himself and carrying a team of trained soldiers, he landed on the island. After a few days on the island, Hensbroek managed to kill a strange species. He took it to the base and measured the length of his prey with a length of about 2.1 meters. It looks very much like a lizard. The animal was then photographed (documented) by Peter A Ouwens, Director of Zoological Museum and Botanical Gardens Bogor, Java. This is the first documentation about dragons.

Ouwens was interested in the findings of these strange animals. He then recruited a clever hunter to catch the specimen for him. The hunter managed to kill two dragons measuring 3.1 meters and 3.35 meters, plus catch two tillers, each measuring under one meter.

Based on the catch of the hunter, Ouwens did research and concluded that the Komodo dragon is not a flamethrower, but includes a type of monitor lizard (monitor lizard) in the reptile class. The result of this research is then published in a newspaper published in 1912. In the news, Ouwens gave a name suggestion on the giant lizard Varanus komodoensis as a substitute of the nickname Komodo Dragon (Dragon Komodo).

Conscious of the importance of dragons as endangered species, the Dutch Government issued a regulation of protection against Komodo and Komodo Island in 1915. Be the area as a conservation area of ​​Komodo dragon. Findings dragons as a living dragon legend, he is curious the international world. Several scientific expeditions from various countries are taking turns doing research on Komodo Island.

In 1910 the Dutch named the island on the south side of East Nusa Tenggara province with the nickname of Komodo Island. The story began with Lieutenant Steyn van Hens Broek who tries to prove a report of Dutch troops about the existence of a large animal resembling a dragon on the island. Steyn then killed a Komodo dragon and brought the documentation to the Museum and Botanical Garden in Bogor for study.

In 2009, Komodo National Park was named the finalist of the new “New Seven Wonders of Nature” announced in 2010 through online voting at www.N7W.com. On November 11, 2011, New 7 Wonders has announced a temporary winner, and the National Park Komodo gets into the ranks of the winners along with, the Amazon Forest, Halong Bay, Iguazu Falls, Jeju Island, the Puerto Princesa River Basin, and Table Mountain. Komodo National Park get the most votes.

To the west of Flores Island is the rare island of Komodo Island, alongside the island of Rinca in the east is located in the Sape Strait, between Sumbawa Island and Flores Island. The trip to Sumbawa Island is done by boat through small islands such as Girilawa, Lulu, Flag and Gilibanta, which takes one day of voyage. As for sailing to Labuhan Bajo in Flores it takes half a day trip, by passing the island of Messah.

Komodo Island residents known as Ata Modo and the island they call Tana Modo, with the number of villages are few in number. According to Zollinger, circa 1850, people who lived on Komodo Island had fled to Bima due to pirate attacks. Based on the report of the Dutch Resident in Kupang, Gronovius sailing to Komodo Island and Sape in eastern Sumbawa, in 1846, was a place used by the pirates to attack villages on the north coast of Sumba and capture the inhabitants for slaves traded.

Most of the pirate ships come from Bugis and Makasar. Even in one of the Komodo legend stories, the pirates are told from the land of pirates, Butung (Buton) in southeast Sulawesi. Reports in the nineteenth century mention Komodo Island as a dumping place for people involved in crime. They are the people who become slaves due to debts and sentences under the supervision of representatives of the Sultanate of Bima. In the 19th century ships from Manggarai, the territory of Sultan Bima, who was about to send tribute annually, stopped at the airport on Komodo Island. The given tribute consists of produce, slaves, beeswax, gold, lontar and acid.

Those are the long history of Komodo Island. Up to now, Komodo Island becomes more popular. Moreover, Labuan Bajo has been opened as the tourism place. More people want to get there to see this creature that called Indonesian dragon.