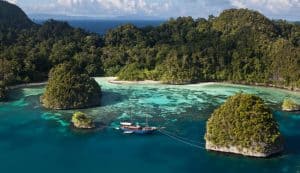 The Raja Ampat Islands is a series of four adjacent island clusters located in the western part of the Bird’s Head (Vogelkoop) of Papua Island. Administratively, this cluster is under Raja Ampat Regency, West Papua Province. These islands are now the destination of divers who are interested in the beauty of underwater scenery. Four groups of islands are named according to the four largest islands, namely Waigeo Island, Misool Island, Salawati Island, and Batanta Island.

Currently, Raja Ampat Regency is part of West Papua Province which consists of 4 major islands namely Waigeo Island, Batanta, Salawati and Misool, and 1847 islands small. The government center is located in Waisai, South Waigeo District, about 36 miles from Sorong City. The new district administration was effective on May 9, 2003.

The origin of the name Raja Ampat according to the myth of the local community comes from a woman who found seven eggs. Four of them hatch into four separated princes and each ruler of Waigeo, Salawati, Misool East and Misool West. Meanwhile, three other eggs became ghosts, a woman, and a stone.

At one time in Teluk Kabui Kampung Wawiyai there was a couple going to the forest (as forest encroachers) to find food, when they arrived on the bank of Waikeo River (Wai means water, kew means bay) they found six dragon eggs.

Until now it is unclear who gave the name to the children but then it is known that each child named:

While a girl (named Pintolee), at one time the girl is known to be pregnant and by her siblings Pintolee placed in the skin of a large bia (shell) then washed away to be stranded on Numfor Island. One more egg did not hatch and became a stone named Kapatnai and treated as a king and even given a room where residing complete with two stones that serve as a bodyguard at either side of the entrance and even annually bathed and splashed water to the community as a babtisan for the tribe Kawe. Not every time the stone can be seen except once a year when bathed.

Because the community is very respectful of the existence of these eggs then built a house on the edge of the Waikeo River as a place to stay and until now still be the object of public worship.  In the course of history, Raja Ampat territory has long been inhabited by noble society. It applies the customary system of Maluku. In this system, society is a group of people.

The unspoiled islands and its still beautiful sea make tourists instantly captivated. Raja Ampat Islands lies at the heart of the world’s triangle coral triangle (Coral Triangle) and is the center of the richest tropical marine biodiversity in the world today.

The archipelago is located in the westernmost part of Papua’s main island, Indonesia, stretching over an area of ​​approximately 4.6 million hectares. Raja Ampat has a wealth and uniqueness of high species with the discovery of 1,104 species of fish, 699 species of mollusks (soft animals) and 537 species of coral animals. Not only species of fish, Raja Ampat is also rich in coral reef diversity, seagrass beds, mangrove forests, and beautiful rocky cliff beaches. Another interesting potential is the development of ecotourism businesses and the region has also been proposed as a World Herritage Site by the Government of Indonesia.

Seeing its position in the coral triangle region, right at the center of the world’s coral reef diversity, the sea in the Raja Ampat Islands is indicated as the most biodiverse richest area in the world. This vast and rich collection of coral reefs proves that coral reefs in the archipelago are able to withstand threats such as coral bleaching and disease, two types of threats that are now endangering the survival of coral reefs around the world.

The strong ocean currents in Raja Ampat play an important role in spreading coral and fish larvae across the Indian and Pacific oceans to other coral ecosystems. This capability is supported by its diversity and resilience level, making this region a top priority for protection. The Raja Ampat Islands are part of a region known as the Bird’s Head Seascape Area, which includes the Cendrawasih Bay, the largest National Marine Park in Indonesia.

Those are the history of Raja Ampat. Up to now the government starts to be protective to Rajja Ampat. It is aimed to preserve the marine life that exists in Raja Ampat. It is one of the biggest asset in Indonesia that must be preserved.