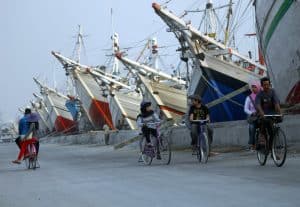 Sunda Kelapa Port is one of the oldest ports in Indonesia and is the forerunner of Jakarta Jakarta. This port was renamed several times but based on the Decree of the Governor of DKI Jakarta dated 6 March 1974 the name of Sunda Kelapa was named as the official name of this port. The Port Harbor on the north coast of Jakarta never dies. It is always crowded by human activities. Gigantic wooden ships were kept awake. The activities of loading and unloading goods from the hull and deck are always full this port.

That is the busyness of Sunda Kelapa Harbor. One of the ports in Jakarta located in Penjaringan, North Jakarta. The old port is also one of the gateways of spreading Islam in Java as well as the forerunner of Jakarta.Sunda Coconut actually has existed since the 5th century and is a port under the ownership of Tarumanegara Kingdom. But in the 12th century changed hands belong to the Kingdom of Sunda.

The location of Kalapa Port is strategic. So this port becomes a commercial center. The foreign ships from China, Japan, South India, and the Middle East, docked at this port with various merchandise. Arab traders became one of the groups who stopped and settled on the edge of this coast. Besides trading, these merchants spread Islam in Tanah Betawi. The Islamic community from Arabia was later shifted by the Dutch to a village called Pekojan – now entering West Jakarta area.

Relics of the spread of Islam past can still be seen around the area. Many of the old mosques built still stand today. Call it Al Anshor Mosque, An Nawier Mosque, and Langgar Tinggi. Because of its strategic, the airport became a bone of contention. On August 21, 1522 King Sunda made an agreement with the Portuguese to stem the attacks of the Sultanate of Demak and Cirebon who embraced Islam. The Portuguese were allowed to build a fortress at the harbor.

The Sultanate of Demak felt jealous. The agreement was considered a threat. Fatahillah sent by Demak to expel the Portuguese and to capture Kalapa. On June 22, 1527, Demak and Cirebon forces seized Port Kalapa. The name was changed to Jayakarta. The date was also commemorated as the anniversary of Jakarta until now.

Demak’s power in Jayakarta eventually collapsed. After May 30, 1619, Jayakarta was captured by the Dutch under the leadership of Jan Pieterszoon Coen. Then, they changed Jayakarta into Batavia. The name was taken from the name of the Celtic tribe who had lived in the Netherlands.

Since Sunda Kingdom successfully mastered this port, Sunda Kelapa Port successfully developed into one of the important ports on the island of Java, given its strategic location. In addition to traders from various regions in the archipelago who conduct trading activities in this port, not infrequently foreign traders from outside countries such as China, Arab, India, England and Portugal. The Portuguese even built relations with the Kingdom of Sunda to be allowed to create a trading office around the port.

The Demak Sultanate saw the Portuguese relationship with the Sunda Kingdom as a threat, then planned an attack on Sunda Kelapa. On June 22, 1527, the combined forces of the Demak-Cirebon Sultanate under Fatahillah attacked and succeeded in controlling Sunda Kelapa and renamed Sunda Kelapa to Jayakarta. This event is then remembered as the birthday of Jakarta.

After Demak came to power, the Dutch under the leadership of Cornelis de Houtman first arrived at Sunda Kelapa Harbor in 1596 with the main objective of finding spices, since at that time spices were a major commodity in the Netherlands because of their various benefits such as medicine, body warmers, and perfume.

In 1610 the Dutch made an agreement with Pangeran Jayawikarta or Wijayakarta the ruler of Jayakarta and made an agreement. Under the agreement, it was stated that the Dutch were allowed to create warehouses and trading posts east of the mouth of the Ciliwung river.

After the agreement was approved the Netherlands also get a big profit due to the spice trade they do in their home country. Seeing the rapid profits, the Dutch finally decided to expand in Jayakarta and then replace the name of Jayakarta into Batavia. Under Dutch rule, the port of Sunda Kelapa was later renovated. Originally the port of Sunda Kelapa, which had only a kanaal along 810 m, was enlarged to be 1825 m.

Starting in the 19th century, the port of Sunda Kelapa began to desert due to the silting of water in the area around the harbor, making it difficult for ships from the sea to be anchored, when at that time the Suez Canal has just opened and should be a great opportunity for the port of Sunda Kelapa to can grow more rapidly again. Seeing this port wasted the potential given by the Suez Canal, the Netherlands then sought a new place to develop a new port.

Dutch attention to develop the port fell to the area of Tanjung Priok. Tanjung Priok then successfully developed into the largest port in Indonesia, the role of Sunda Kelapa Harbor was replaced with the existence of this Port of Tanjung Priok. In 1942, when Japan came to power, Batavia’s name was changed to Jakarta. Two years ago, when the Dutch reigned, the name was unchanged. Only in the 1970s, the government changed the name of the port to Sunda Kelapa.

Now, the port of Sunda Kelapa does not look as busy as its glorious period. This port is now only serving services for inter-island ships in Indonesia. However, considering of having a high historical value, now this port is converted into a historical site.

The Dutch heritage buildings around the port area are now used as museums. There are several museums around the harbor, such as Maritime Museum, Fatahillah Museum, Wayang Museum and so forth.

Those are the long history of Sunda Kelapa Por. Now, Sunda Kelapa Port is still functioned. Many of the wooden ships that lean here carry the various needs of the community. Started grocery, wood, to cloth. Besides still busy with commercial activities, Sunda Kelapa Harbor is also a marine tourism destination that is worth a visit.