Home » Socio Cultural » 15 Reasons Why Indonesia is the Happiest Country

15 Reasons Why Indonesia is the Happiest Country 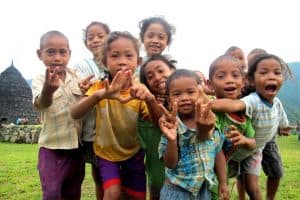 According to a survey conducted by the Gallup International Association, happiness is mostly distributed by the majority of Indonesians. Apparently, Indonesia is ranked the 8th happiest country in the world in 2017, above India, Argentina, and the Netherlands.

There were 54,000 people from 55 countries questioned between October and December 2017 for the survey. Results for Indonesia are based on a sample size of 1,026 people responding to online surveys. 73% said they were happy. And this is the highest number compared to other countries that only a few percent say they are happy. Here are the reasons why Indonesia is the happiest country.

Indonesia is an archipelago country that has a lot of culture. No wonder then these various cultures create a variety of traditional culinary that can only be found in Indonesia. Some traditional culinary from Indonesia are even famous in abroad. Some of the famous culinary examples are satay, rendang, nasi goreng , and many more. That is why most of Indonesians could be happy since the foods menu of culinary could be so various.

The beach is the best place to release stress. The sound of waves, wind, and birds are also believed to be the best meditation to pacify the soul. In Indonesia, they do not have to travel too to the beach. Various types of beaches with a variety of sand color can be found easily in Indonesia. That’s why Indonesians are so happy. Because they have beaches everywhere. For further information, you could see the Facts about Indonesian Beaches.

Indonesia is a multicultural country. That is why, there is a lot of  Diversity in Indonesia. In addition to different cultures, Indonesians also embrace different religions. Although sometimes there are many conflicts, but Indonesians still look harmonious and united. They can tolerate each other with their own culture and beliefs. Not infrequently, you will find Christians guarding in front of Muslim mosques so they can worship comfortably. So, it is one of the reasons it can be the happiest country. Whether it is    Religious Diversity in Indonesi or Cultural Diversity in Indonesia, we have no problem with that.

Indonesia is a tropical country with a 70% sun emission ratio during the day. With the sun shining, the Indonesians will be more eager to live their day than those who live in areas rarely exposed to the sun. Moreover, sunlight is great for bone health. That is the reason Indonesians are happy.

Indonesia is an archipelago country that has a very varied natural state. You can find various natural icons in this country. When Indonesians want a vacation, they will easily find the beauty of nature such as beaches, mountains, mountains, rivers, waterfalls, and lakes. Even not infrequently, a lot of foreign tourists who also want to see the beautiful scenery of Indonesia and they can not find anywhere.

Indonesia is ranked 56 out of 112 countries. This position shows that Indonesia has a cost of living that is not too expensive. On the other hand, when compared with eight countries in the Southeast Asian region, Indonesia is seventh as the country with the lowest cost of living, only losing to the Philippines with fewer drift figures. While the daily requirement price is lower 49.22% than New York. Note that you should consider of How to Live Cheap in Indonesia.

This year, CNN re-released the list of 50 world’s best food through 35,000 voting on Facebook social media. And it turns out, Indonesian fried rice also entered into the list. In addition, a brand of instant noodles “Indomie Goreng” from Indonesia also crowned as the most delicious instant noodle in the world.

Indonesia is a country with very friendly people. With the status of the country with the fourth most populated population in the world, Indonesia is characterized by its friendly inhabitants. It is proven that local and foreign tourists feel very helpful with Indonesian citizens of which it is easy to chat with them. From the various experience of the foreign tourists, they stated that the citizens of Indonesia are always smile while having conversation.

So far Indonesia already has 8 sites that listed as UNESCO World Heritage Sites. At the headquarters of the UNESCO organization in Paris, France there are many queues from countries in the world waiting for the announcement of historic sites in the country to be recorded as World Heritage Sites by this UN special agency. For this reason the people of Indonesia must be very proud of this.

Since 2008, global economic and investment growth has shifted to new markets, driving demand for cheap labor, water and land and other natural resources. In Indonesia, workers’ human rights continue to be compromised, and the handling of human rights has increased in the past decade.

Do you find that today there are much of Indonesian celebgram, vlogger, singer, even magician that starts to be popular in the world? It would not be happen if Indonesia doesn’t allow the people to express their creativity. Indonesians are on the top ten of the most social media users in the world. Compared to the country which band every social media to use, Indonesia is a happy country.

While you visit Bali, how many traditions have you ever seen? It is more than one exactly. Imagine that Bali is just the small part of Indonesia, while there are still thousands islands and culture that have the different cultures. The Javanese traditions, the Torajan traditions, and Lombok are just the small numbers of other cultures. How could they live together with various traditions? It is because they are happy. To see the traditions in Indonesia, you could enter Indonesian Traditional Crafts.

Indonesia is a developing country that still strives to grow up. However, it could do the great progress in infrastructures step by step. In early 20’s Indonesia could surprisingly repair all of the conditions after announce the independence in 1945. It is not easy for a country to grow up independently after colonialism. But Indonesia can make it.

Most of Indonesians likes to watch comedy. Because of this trend, there are a number of comedian grows in this country. It seems like many Indonesians are funny. It is proved that most of foreigner said that their friends or the people of Indonesia whom they know are funny and typically amusing.

Those are the reasons why Indonesia is the happiest country in the world. Whether it is happy or not, it is actually just a perspective. If we see from the positive perspective, we might say that every country could be the happiest apart from the problems inside a country.

The Side History of Surfing in Indonesia

The Long Term History of Soccer  in Indonesia