Home » History » The Dark History of Violence in Indonesia

The Dark History of Violence in Indonesia 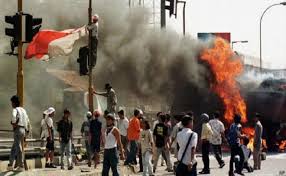 Indonesia is popular as a multicultural country, friendly people, and peaceful country. However, it doesn’t mean Indonesia has never had an intern conflict before. Indonesia grows toughly through some stages and phases that might all people in the world know.

Some violence and conflicts in Indonesia had been occured since hundreds years ago. Conflicts, violence, and wars usually becomes a package that successfully frightened the local inhabitants. However, Indonesians also did some terrible violence for some purposes. Here is the detail history of violence in Indonesia.

Many events occurred in the past showed violence committed by the Indonesian nation. Violence is not a new thing in Indonesia. Since the Hindu – Buddhist era many violent events recorded and recorded by humans.

The second violence was also happened in the events of war that made Sriwijaya around 682 AD when invaded Malay. Not only that, the legendary affair of Ken Angrok’s legendary power and romance in the 13th century AD also characterizes its own violent acts. He killed Tunggul Ametung king and husband of Ken Dedes the woman he loved.

At the time of Islamic people in Indonesia also did the same violence. As it was known that in 1637 Amangkurat I from the Islamic Mataram kingdom once killed 6,000 Muslims who opposed his policy of working with the VOC. In addition, Amangkurat I often did battle against the kingdom of Banten and Surabaya. In Sumatra there was also a violent action by Padri forces when attacking Batak people in Batak land in about 1816.

Meanwhile in Banten there was also a rebellion by the farmers in 1888. This rebellion was spearheaded by Islamic scholars who voiced the Sabil War in the way of Allah against the Dutch and their followers. They consider that the Dutch as non-Islamic people, should not rule over Muslims.

This rebellion was also the result of the hatred of the Indonesian people to the Dutch who oppressed the people of that time. People whose emotions become uncontrollable when invaded the city of Cilegon. They slaughtered all the indigenous people who worked for the Dutch, as did the Dutch.

G30SPKI is the short of September 30th Movement of the Communist Party of Indonesia. This violence originated from the birth of a communist pioneer led by Muso in Madiun in 1948. In Madiun the communists perpetrated violence and massacres against clerics and government officials of Indonesia. The land and wealth of the rich are taken away by the communists. But their action was stopped by the Siliwangi division so that Muso was killed on the spot.

More severe violence occurred again in 1965. There was a bloody massacre perpetrated by the PKI (Communism Party in Indonesia), led by DN Aidit against the seven generals of the Republic of Indonesia. They attempt to change the ideology of the Pancasila state, with communist ideology. But the Indonesian army succeeded in crushing the PKI rebellion movement on October 1, 1965.

After that, people who were shocked and angry toward the PKI’s actions spontaneously counterattacked. They hunted and killed people who were suspected and involved into PKI. Thousands of people suspected of involvement in PKI were killed in Bali due to civil war. The events of the PKI uprising had a tremendous impact on the people’s counter-violence against the PKI in various parts of Indonesia.

The ethnic Chinese often experience violence in Indonesia, both before and after Indonesia’s independence. In the 20th century alone, recorded violent events occurred in 1916, 1946-47, 1966, 1980, 1996, and 1998. Socio-economic competition is often the main cause of violence against ethnic Chinese. They are a minority, but economically more capable than the majority of natives. Here is the long history toward Violence against Chinese Ethnic in Indonesia.

During the New Order period, the government maintained a small minority of very rich Chinese entrepreneurs. Various restrictions on ethnic Chinese, New Order policies in the mobilization of foreign capital for development, as well as existing client relationship patrons with a handful of Chinese businessmen have created a class of owners of a giant business conglomerate rich. The cukong grew up under the protection of the ruler.

There was a general perception that Indonesians of Chinese descent had dominated the Indonesian economy. It is this assumption that then enhances anti-Chinese sentiments and ignites resentment among Indonesians.

The 1997 financial crisis exacerbated this situation. The peak of the riots occurred in May 1998, in which many ethnic Chinese became victims. However provocation plays a major role in turning anti-Chinese sentiment into violence, it is the result of the New Order’s discriminatory policies. The Chinese are still treated as outsiders, non-indigenous.

When the regime created a stronger and more powerful economic injustice by keeping the Cukong (a title for Chinese rulers), anger against the regime was transformed into violence against Chinese ethnicity. At least hundreds of Chinese were killed and dozens of others were raped during the May 1998 riots.

There was also some violence that done by Indonesian army toward the students of university due to the big demonstration that happened in 1998. This was the black side of Indonesian history to create reformation era. To see more explanation, you could see this following passage.

The collapse of the Indonesian economy since 1997 made the election of Indonesian government at that time very decisive for the economic growth of this nation in order to get out of the economic crisis. In March 1998 the MPR at that time was opposed by the students and some people still determined Soeharto as President.

Since before the 1998 General Assembly a demonstration has been held by Yogyakarta students until the time of the 1998 MPR. Student demonstrations became increasingly common in many cities in Indonesia, including Jakarta, until it continued until May 1998.

At that time a joint demonstration of students from various universities in Jakarta planned to simultaneously demonstrate down the streets in several locations around Jabotabek.

The first major incident was on 2 May 1998 in front of IKIP Rawamangun Jakarta campus because students were intercepted by Brimob and in Bogor and non-IPB students were denied entry into IPB campus so it clashed with the apparatus. They can only demonstrate to Rawamangun and Bogor so that there are clashes that result in dozens of students injured and hospitalized.

The situation grew heated. Almost every day there was a demonstration that Brimob and military attitudes were getting tougher on students especially since they dared to take to the streets. On May 12, 1998 thousands of Trisakti students demonstrated against Suharto’s re-election as then-elected President of Indonesia at the beginning of the New Order.

At that time, students moved from the Trisakti campus in Grogol to the House of Representatives / MPR in Slipi. Being blocked by the police, they returned to campus and in the afternoon there was a shooting of Trisakti students. The shootings took place during the afternoon and left 4 Trisakti students dead and dozens of others both students and the public were hospitalized for injuries.

Throughout the night of May 12, 1998 until the morning, the people rampaged and did the destruction in Grogol area continued to spread throughout the city of Jakarta. They were disappointed with the actions of officers who did the dead shoot for students. That day, Jakarta was frightened and tense.

In the beginning of November 1998 Indonesia’s transitional government held a Special Session to determine the next election and discuss the government agenda to be undertaken. Students churned back because they did not recognize B. J. Habibie’s government and did not trust the members of the New Order’s House of Representatives / MPR. Here was how Semanggi tragedy happened. You could see these more explanations about Semanggi tragedy.

On November 11, 1998, students and communities moving from Salemba Street, clashed with Pamswakarsa at the Proklamasi Tugu complex. On November 12, 1998 hundreds of thousands of students and society moved to the DPR / MPR building from all directions, Semanggi-Slipi-Kuningan, but none managed to penetrate to it because of the very tight guarded by the army, Brimob and Pamswakarsa.

In the evening there was a clash in Slipi and Jl. Sudirman, dozens of students are hospitalized. Thousands of students were evacuated to Atma Jaya. A student named Lukman Firdaus was seriously injured and hospitalized. A few days later he passed away.

On Friday, November 13, 1998 Indonesian students and civilians had joined and reached Semanggi and surrounding areas. That day they joined the students who are already on the campus of Universitas Atma Jaya Jakarta.

Sudirman Road had been confronted by officers since the night. In the morning until noon, the number of apparatus grew more a d blocked the rate of students and society. This time the students with the community were surrounded from two directions along Jalan Jenderal Sudirman using arare more vehicles.

Just then a few students were shot and died instantly on the road. One of them was Teddy Wardhani Kusuma, a student of the Indonesian Institute of Technology who was the first victim of the day.

The number of victims recorded by the Volunteers Team for Humanity amounted to 17 victims, consisted of 6 students from various universities in Jakarta, 2 high school students, 2 members of the security apparatus from POLRI, a member of the Hero Supermarket Guard, 4 members of Pam Swakarsa and 3 civilians .

While 456 victims were injured, mostly by gunfire and blows of hard, sharp / dull objects. They consist of students, students, journalists, security apparatus and other members of the community from diverse backgrounds and ages, including Ayu Ratna Sari, a 6-year-old boy, struck by a bullet in the head.

In conclusion, Indonesia has ever become a bad country where the violence occured. It was not easy to unite the diversity. It was never be easy to fight for the different opinion. Till today, maybe there are still a number of people who do the violence for some purposes. And hopefully, it would never be as massive as the history.