History of Train in Indonesia 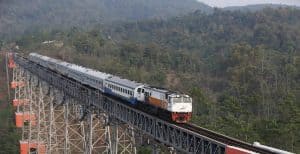 Trains are one of the modes of transportation that people choose. In addition to its fairly affordable tariffs, trains can take passengers with a faster duration of time than any other ground transportation. Read also Airports in Java Island

Trains are widely used as transportation options for Indonesians, especially in Java. Train has been operating in Indonesia since the mid-19th century during the Dutch colonial period. When Indonesia is controlled by the Japanese Military, the management of trains is taken over and used by the Japanese government.

After Indonesia declared independence, employees of the Moeda Railway Force (AMKA) took over the power of railway management from the Japanese military. On September 28, 1945, AMKA stated that the official railway management is in the hands of the Indonesian nation as well as commemorated as Hari Kereta Api in Indonesia.

Railway in the Dutch Colonial Era

The initiative to build railway lines in Indonesia began in the era of forced cultivation in 1830. At that time, Governor-General Johannes van den Bosch initiated the construction of railway lines in order to increase the volume of haul crop production in the interior. In 1840, Colonel JHR Van der Wijk submitted a proposal to build a Jakarta railway to Surabaya. See also Traditional Transportation in Indonesia

On August 10, 1867, the first railway line in Indonesia began operating in Central Java and connected to the first station in Semarang. This train leaves for Temanggung which is 25 kilometers away. The railway line is then expanded to reach Yogyakarta. At the beginning of its journey, the railway is managed by the Nederlands-Indische Spoorweg Maatschappij company and uses a standard gauge of 1,435 mm.

The Dutch government actually tends not to build their own lines and grant them to private companies. However, private companies are not getting the expected investment returns. Therefore, the Dutch colonial government finally established a government-owned railway system called Staatsspoorwegen.

The Dutch colonial government’s railroad company then continued work by connecting Bogor in the west to Surabaya in the east. The construction of the railway began on 16 May 1878 and the two cities were finally connected in 1894.

In the 1920s, almost all the strategic towns and villages in Java were connected to the railway line. Some trains operate to transport sugar to factory. Currently, although Staatsspoorwegen is no longer managing trains in Indonesia, many of the railways are still in use today.

The takeover of the Railway by the Indonesian Government

After Indonesia gained full recognition of independence in 1949, various rail systems were combined into the Djawatan Kereta Api. The company brought in 100 steam locomotives in 1950 to re-serve passengers. In addition to steam locomotives, the company also brought in an electric-diesel locomotive originating in the United States in 1953. The nationalization policy set by the government made the entire railway line in Indonesia managed under the auspices of the State Railway Company in 1958.

PJKA continues to bring in electric-diesel locomotives. In the 1980s, most train travel services used diesel-electric locomotives. In addition, PJKA also brought in several electric train units from Japan in the 1970s to replace old locomotives. You may read also Train system in Indonesia

The name of PJKA was changed in 1991 to become Perusahaan Umum Kereta Api (Perumka). During the period 1995-1999, the train service in Indonesia had experienced a resurgence. Various train services were introduced to increase passenger volume. However, PT. Railway difficulties facing competition cheap airline tickets so that must decrease the number of passengers.

Perumka name changed again on June 1, 1999 to PT. Kereta Api (Persero). PT. Kereta Api still continues the monopoly of railway management in Indonesia. The classic problem of railway industry in Indonesia is still happening. The station remains shabby and stuffy. Added to the weak supervision of the system in and out of the station, many beggars and beggars roam the train. Not to mention the existence of train passengers who sit on the roof of the train which further worsen the Indonesian railway industry.

While still a PT. Kereta Api in 2008, PT KAI suffered a loss of Rp. 80 billion. Classical problems are identical to rail conditions such as the number of street vendors roaming, passengers riding on the railway roofs, as well as the condition of rudimentary stations and trains.

Led by CEO Ignasius Jonan, PT KAI clean up. Settling begins with actions such as cleaning of street vendors from economy trains, installing air conditioners on economy trains, eliminating passengers on train roofs, applying electronic tickets on the commuter line, and ensuring the cleanliness of every station and train.

PT. KAI is still up to now. Although improvements have been seen, the balance sheet has been positive, and development plans have been set, PT. KAI still faces many challenges. One of which is still a concern is the quality of PT. KAI when compared to the condition of the railway of developed countries in the European region. See also History of Trade in Indonesia

Brief History of Trade in Indonesia

History of Technology in Indonesia