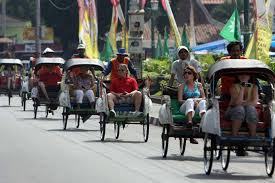 However in Indonesia, it is still left behind in the appeal of other world countries that have sophisticated its transportation.

Nevertheless, Indonesia has the privilege, because Indonesia’s public transport is still traditional and rare. Here are the facts of Indonesian traditional transportation you can follow.

This transportation uses a horse as its driver, the name of this transportation comes from the inventor’s name, namely Charles Theodore Deeleman, a lithographer and engineer in the Dutch East Indies. Delman also has other names like Andong, which has four wheels. In Jakarta, naming Andong is often also referred to as ebro taken from the abbreviation Eerste Bataviasche Rijtuig Onderneming which means First Train Company in Jakarta.

Andong wheeled four while the delman only has two wheels. When compared with the delman, andong is more comfortable to ride the rollicking. The reason is andong more stable because of four wheels. While the delman should be climbed by two or three people just because it is less stable than with andong.

Now, the delman is only used as short-distance transport or for vehicles at tourist attractions. In some tourist areas, delmans are allowed to operate by following urban hygiene rules, such as using horse droppings. Delman is even numbered as it does on motor vehicles. Although rarely encountered, but still many people are happy to ride this vehicle. The sensation of sitting on a train run by a horse while enjoying the scenery is fun.

In earlier times, the delman was used as a major means of transportation and often used for long-distance travel. During the Dutch East Indies government in Indonesia, the delman was used as an inter-city transport, especially before trains and other motor vehicles operated in Indonesia. In the past it was only important people and wealthy people who can ride this vehicle.

The birth of a becak was emerged from outside Indonesia. Rickshaws first appeared in Japan in 1868 (the beginning of the Meiji restoration) under the name Jinrikisha which means a vehicle withdrawn by human labor. At that time the pedicab is still two-wheeled and pulled with human power. Then around the 1880s, becak began to fame in China as Rickshaw. While in Indonesia itself, becak comes from Be Chia which in Hokkien means horse-drawn carriage.

Rickshaws first entered Indonesia in the early 20th century, for the purposes of Chinese merchants transporting goods. However, the story of pedicab origins in Indonesia still has many different sources.

The first person who initiated the prototype of a rickshaw is Jonathan Goble. He is an American citizen who works in Yokohama as a maid of the Great American Kindness in Japan. Initially, he had this idea because he wanted to take his wife, Eliza Week, who was paralyzed around enjoying the scenery of Yokohama. Meanwhile, the person who realizes the Goble idea is Frank Pollay who is his best friend. He was assisted by a blacksmith named Obadiah Wheeler.

But when Japan came to Indonesia (1942), the number of pedicab actually increased. This is because at that time Japan is strictly controlling the use of gasoline and banning private vehicle ownership. As an alternative to daily transportation, the people of Indonesia finally take a pedicabs.

A different pedicab policy is ruled under the leadership of Governor Anies Baswedan. In 1970 the Governor of DKI Ali Sadikin issued a directive prohibiting the production and entering of becak to Jakarta, including rickshaw rayonization. This refers to a law issued by the Jakarta Regional House of Representatives (DPRD-GR) which does not recognize rickshaws as a public transportation vehicle. A year later, the city government also set a number of protocol roads and roads cross-economy pedicabs must not be passed.

Can you feel that lately in Indonesia, maybe even around the world there is growing number of bicycle users? Although there is no official data about the number of regular bicycle users in the country, the phenomenon that occurred at least the last 2-3 years showed a boom bike.

The number of bike sports fans, especially in big cities, shows an ever-increasing trend. This has a positive impact on the growth of a variety of bicycle communities, as well as to stimulate the growth of bicycle industry and other complementary accessories.

If you are on holiday to Maluku, surely you come across traditional transportation this one. Just like the same hell bentor of Medan, but there are distinguishing you know! The Bentuku Bentor driver’s seat is behind the passenger. It also makes the driver feel the trouble when turning because it feels heavier. But it does not matter to them to preserve this traditional transport. In addition, the castle in Maluku is full of modifications and music. You will feel as if you are karaoke.

“Sepeda Ontel” as a legend bicycle that is a famous traditional transportation before 70’s. Ontel bike used to be the main transportation, but some people starts to lieve it as the epic antique  properties at home. Even so, this traditional vehicle until now still survive and can be found in Jakarta Kota Station, West Jakarta, and in Kota Tua.

This is a public transport vehicle that existed in Jakarta in the 1970s. It looks like a helicopter. Its name comes from a combination of words helicopter and pedicab (Helicopter and Becak). This vehicle was first introduced in the era of Governor Ali Sadikin’s government as a substitute for rickshaws that were considered as  ancient. It is just like a rickshaw, the helicak driver is behind, while the passenger sits in front in an iron frame that protects passengers from rain, heat, or dust.

13 Importance Of Family In Indonesia

Brief History of Trade in Indonesia