17 Public Transportation in Indonesia You Must Know 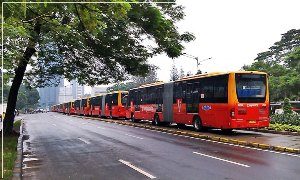 In Indonesia, a lot of bus types are used as public transportation, such as Inter-city Bus, Metromini Bus, Trans Bus, School Bus, Campus Bus. Although the most used bus is busway or Bus Rapid Transit, that is a mass transit that uses the bus as a carrier on the passenger but is different from the city bus.

In general, Busway is different because it has an exclusive path that makes it free from congestion. In Indonesia alone, big cities that have BRT mass transportation modes include Bandung, Bogor, Semarang, Jogja, Palembang, Bandar Lampung, and of course Jakarta. 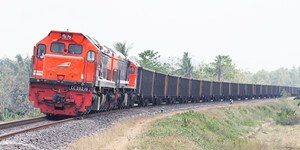 A train is a common form of public transportation for long trips, usually between cities or provinces. In Indonesia there are many types of trains that have been operated, ranging from old-school trains that use coal to the new fast train.

The Train operations mainly operated in the Java  to transports goods and people as they had better infrastructure and wide ranging railway track. Although recently the development of railway track has been developed across entire Indonesia 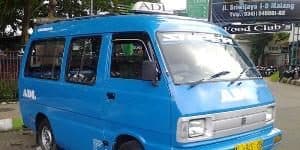 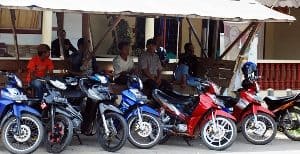 The development of motorcycle taxis is also very rapid, formerly motorcycle taxi can only be found in motorbikes temporarily passing on the highway, but now in big cities, there are already some online services from this one transport.

The advantages of motorcycle taxis from other public transportation are motorcycles that can pass through traffic jams and can also reach small streets or alleys that basically can not be bypassed by other types of public transport. 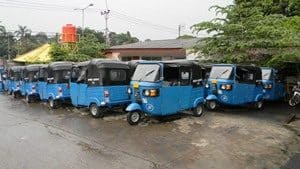 Bajaj is a three wheeled type of public transport vehicle. Bajaj can load 2 people passengers plus one small child. The hallmark of this vehicle is its unique shape and noisy sound even though there is now Bajaj who use gas and electricity that sound more subtle. Bajaj mainly used to transport people with goods who just went shopping and need to commute back home. This type of vehicle is widely used in Jakarta.

In addition to Jakarta, bajaj is also found in the city of Banjarmasin and Pekanbaru as well as some district capitals in Indonesia which generally served as public transportation capital. 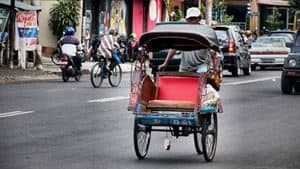 Pedicabs are a three-wheeled model of public transport. In Indonesia there are 2 types of pedicab that are operating namely the conventional becak and motorized becak. The uniqueness of pedicab vehicles in Indonesia is the location of the driver who is behind the passenger, although there are some in the area of Sumatra where the driver on the front side.

Becak mainly existed in a rural area while in the urban city it has been outlawed due to its role in creating massive traffic jams. 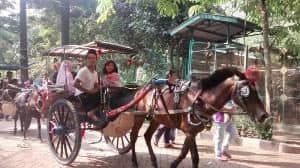 Delman is a traditional, two-wheeled, three or four-wheeled public transport type and uses a horse as a driving force. Variations of transportation using horses include wagons, chariots, and horse-drawn carriages.

The name of this vehicle comes from the name of its inventor, Charles Theodore Deeleman, a lithographer and engineer during the Dutch East Indies period. Delman is still used in some areas in Indonesia, which is very popular in the special region of Yogyakarta. 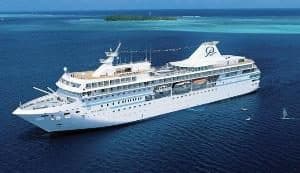 The ship is a public transport vehicle carrying passengers and goods with the power of diesel and nuclear engines. Traditionally the ship is called a ship when it can carry the boat but the boat can not carry the ship. The actual size at which a boat is called a ship is always fixed by local laws and regulations that were enforced.

The types of ships used in Indonesia are many. Starting from a ship loaded with more than 2000 people to other ships that have fewer passengers than that. Current administration has made ships route available to many parts of Indonesia so as to reduce the goods tariff especially in Papua

Beside what I explained before, there are also other public transportation which is commonly used in Indonesia, as follows:

Ferries are public transport that is usually used as a direct liaison or transit of two areas to transport the landed vehicles such as motorcycles and other cars at a cost less than a bridge or tunnel.

Boats are a type of public transport to move passengers and goods that are made of wood or boards. The number of passengers from this boat is usually 2 – 8 people depending on the size of the boat. Boats are still found in many areas in Indonesia that have many rivers.

Perhaps some people think that rafts are a kind of ancient public transport that is no longer in use today. But the facts are in some areas in Indonesia, rafts are still used to cross the river or lake at close range. Not infrequently the raft is also functioned like a ferry and as a carrier of other land vehicles.

In Indonesia, the type of aircraft used to fly can vary due to the region. From very large aircraft such as BOEING type to small aircraft type that functioned to transports people to remote regions in Indonesia

Helicopters are widely used as public transportation in Indonesia in mountainous areas that can not be crossed by other types of vehicles. Usually, helicopters in use also for commercial travel.

Taxis are a type of vehicle that can be rent with a driver, used by a single passenger or a small group of passengers. A taxi drove the passengers to their preferred location.

Tram is the most popular mode of transportation in tourist cities. Tram is chosen because the weight and size that are very small. In addition, most tram operates on land so as in addition to its main function of mass transportation, Tram can also serve as a city sightseeing vehicle. Tram was first used during Soekarno era in Jakarta but its role now is being abandoned by more advanced vehicles.

The comfort ability of transportation between one region to another region is important to connect people and also increase the movement of people that are necessary for developing one’s country economy. Good transportation will play an important role in regional development especially in accessibility. The more efficiency of a transport vehicle and wider availability of it can, in turn, reduce the cost and fee needed for an average person to make the trip.

Public transportation is necessary to help facilitate the movement of people within one’s country. It also functions to help ease the congestion by moving large people at one time. The efficiency of public transportation heavily depended on the public official willingness to implement a regulation that will, in turn, increase public satisfaction when they commute in the surrounding area.