Home » History » Megalithic Site in Gunung Padang: A Place To See The Past Time

Megalithic Site in Gunung Padang: A Place To See The Past Time 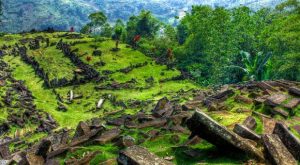 Indonesia is not only well-known for its natural resources such as beach, mountain, and island, but also it has diverse culture drawn from Sabang to Merauke as well. Those cultures also contribute to tell history in Indonesia. If we look at certain culture, such as Tana Toraja or Bali, we can say that cultural practice nowadays is heavily influenced by our ancestor’s belief and lifestyle.

If we go back to past, before the era of kingdom, dynasty, and empire, Indonesia pretty much consists of huge forest here and there. Some believe that Indonesia has more advanced civilization than nowadays Indonesia. It could be proven by looking at the leftovers from the past such as Borobudur Temple.

However, people are assuming that there’s older civilization than the one in the Borobudur. It’s a megalithic site in Mount Padang, West Java. The site is located in Gunungpadang village, Cianjur. In this mountain, you can find a ruin from ancient world of Indonesia in form of stones that’s believed that it used to be a giant monument.

You can access this site in 20 kilometres in Warungkondang, a border between Cianjur and Sukabumi. Its majestic and large area making it the biggest megalithic site in South East Asia.

A report regarding the megalith site had been done since 1914 by Dutch archaeologist and centre of archaeological bureau at the time. Then the site was abandoned until 1979 when three local people reported to the government that they had found piece of rock with various size that forms a stairs to lead to the summit of the mountain.

After that, the government has involved in this archaeological project until now.

2. The Myth behind the Site

Local people believe that the megalith site was a palace built by King Siliwangi from Padjajaran Kingdom but his attempt failed. That’s why, local people consider this mountain as sacred since it was a holy place from ancient kingdom.

Other version believe that megalithic site of Padang Mountain has been around since 2 B.C and people at the time used the site to give offerings to their God. The research from archaeologist Rolan Mauludy and Hokky Situngkir shows that the series of stone were also a musical instrument.

Based on the research in the past, by digging the mountain, archaeologist found that there’s 20 level of terracing system from bottom to the top of the mountain. This indicates that the ancient civilization is surprisingly advanced because they knew how to cultivate a land. It is also proved that ancient society has already known mutual cooperation system way before it’s introduced in the modern Indonesia.

Other than that, Archaeologist also found a river flow below the mountain which is believed that it had been created since ancient civilization. This discovery made archaeologist rethinks about the ancient world and its connection with other megalithic site as well such as Machu Picchu or Pyramid while local people only think that this megalithic site is a leftover from Padjajaran Kingdom.

4. Megalithic Site of Mount Parang Could be the Oldest Artefact Found in the World

From the research result coming from national and international researchers, it’s possible that the terrace system and its component could be for more than 25.000 years old which could be the oldest megalith site in the world has ever found.

If that data is true and supported by other research held national or internationally, the megalith site of Mount Padang could be older than Pyramid in Egypt or Machu Picchu in Peru. Amazing, isn’t it?

5. A Big Reveal inside the Mountain

The government at the time, Thomas Stamford Raffles – in 1814 – employed 200 people to dig the site from top to bottom. As result, Indonesia has now majestic Borobudur temple from 8th-9th century.

Imagine if government decides to dig in the Megalith Site of Mount Padang. Researcher believe that below this 900m2 ancient site, lies down bigger monument than Temple Borobudur. It’s still a speculation, but if the rumour was true, then there would be huge discovery coming from Indonesia.

6. Another Advanced Civilization in Stone’s Structure

The stone in the Megalith Site of Mount Padang used already its own type of cement to placard one stone to another. This cement was made by clay, iron, and silica. Scientist proves it by showing that the amount of iron in a cement is up to 45%. While other stone that had been found before has only three to four percent of iron.

This is why some scientist believes that the civilization that lives in the Mount Padang a long time ago is more advanced than other civilizations due to its capability to create solid cement with high amount of iron. Especially when they already could mix it with other ingredient.

There is already a filmmaker that makes a film about Mount Padang, He is Rizal Mantovani who creates a film titled Firegate: Piramid Gunung Padang. It tells a story about journalist, archaeologist, and supernatural expert to discover the mystery of this megalithic site.

This site has been blowing the world with its mystery and it attracts many people to come and witness it itself. What a discovery!

8. The False Claim of Pyramid

Many people already claim that below the ruins in Mount Padang lies a pyramid. That assumption has already been bunked by Lutfi Yondri, researcher in Centre of Archaeology Bandung. He said that the megalithic site of Mount Padang isn’t a pyramid and also it’s not as old as what people might think.

First, the assumption of pyramid inside a mountain was aimed at Mount Lalakon in West Bandung and Sadahurip in Garut. However, people shifted their focus to Mount Padang. Probably due to the ruins from ancient world.

To prove the rumour is true or not, archaeologist needs to dig deeper. The amount of material that has been researched didn’t prove the whole hypothesis since they only take about 1-2% from the site. While the result shows something shocking, it doesn’t prove the whole site had been built with the same material as there are many hypothesis from one researcher to another.

Those are some interesting facts about megalith site in Mount Padang, Cianjur, West Java. Between historical, supernatural, and academic perspective, it builds many interesting stories. Other than that, the site is a huge discovery that could show us how ancient Indonesia world looks like in the future.