Home » Art » 10 Annual Indonesia Festivals You Should Not Miss 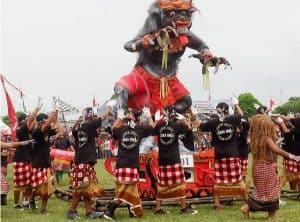 Indonesia is a big country with thousand cultures from many tribes and communities. Those communities usually holds certain ceremony to celebrate, commemorate, or honour something or someone important that contributes to the community in the past.

Just look at some traditional ceremonies that’s held in Indonesia, they have holistic purpose that could be very important to them. However, as time goes, this ceremony also evolves to attract tourist to visit the site. Some villages and cities transform their conventional method of practicing the ceremony to a grand festival full of fashion show, traditional dances, and art performance.

Some modern festivals also appear to answer market demands while mixing it with cultural belief from the local society. Here are some of the most annual festival that you might not miss when you visit Indonesia:

Bali where the people are religious has interesting annual ceremony opened for public. The ceremony is called Ogoh-ogoh Festival. This festival is held one day before their biggest annual event, Nyepi. Ogoh-ogoh is a big statue resembled the Bhuta Kala or the manifestation of evil in Hindu religion.

A team consisted of 10-20 people will make the statue and then they will go around dancing and shouting to act like an evil. This festival is held to drive away evil spirit before Nyepi ritual begins so that Balinese people can practice their ritual without disturbance from supernatural beings.

After going from Bali, we visit its neighbour, Sumba (Nusa Tenggara Timur). This festival consists of local people who ride horse wielding spear and shield. This festival depicts the battle of two tribes in Sumba. However, the festival is only an act and they don’t really attack each other.

Pasola is a part of Nyale festival, a festival to honour ancestor and ask their blessing so that the harvest season can produce many agricultural stock that can balance the prosperity in the land. This festival is usually held in early February until the end of March.

Just like other religious community in Indonesia, Buddhist people also celebrate its annual event. While there are many Buddhist community spread across Indonesia, the celebration that’s very popular of course is held in Borobudur Temple, Magelang. This event is usually held in May.

Waisak celebration is always open to public, but pay attention to the rule that’s instructed by committee. Usually, after the ceremony, there will be some art performance and other cultural exhibition. At night, there will be a ritual where people will fly a lantern to the sky that creates beautiful scenery at night. You can also write your wish inside the lantern before release it to the sky.

One of big icon in Banyuwangi is festival of Gandrung Sewu. This annual festival is held to preserve traditional dance from Banyuwangi, Gandrung Dance. This festival is called Gandrung Sewu because you will witness thousand young woman dance in a location with beautiful rhythm and movement.

This dance is a celebration and a sign of ‘thank you’ to Goddess of Harvest and prosperity in ancient Javanese culture, Dewi Sri. This dance was born because people of Banyuwangi believe that Dewi Sri gives fertility to their land and they always gain big profit from harvest season. That’s why this dance is dedicated toward the Goddess’ kindness to people of Banyuwangi.

Dieng Culture Festival is annual festival held in Dieng, East Java. It’s one of the biggest music festival in Indonesia. What makes this festival unique is the fact that it’s held in a mountain since Dieng mostly consists of plateau. Also, Dieng is known for its cold climate, so it would be no surprise if you will feel cold when going to the festival as the temperature could hit -4o C.

But don’t worry because you only need to prepare dense jacket to warm yourself and problem’s solved. There will also be a ceremony just like in Borobudur where you fly a lantern and make wishes while flying it to the sky. Usually, the festival is held around midyear (July-September).

This festival is unique because its form is not like other festival like art performance or religious event, but a race. Karapan Sapi is a race competition by riding two cows. The system is likely similar to Western horse riding, but instead of using horse, it uses cow.

This festival is very popular in Madura because people love the tension between one participant and other. The atmosphere is also competitive and rousing, yet fun. The winner of this race will get President Trophy. So if you want to challenge your adrenaline while watching festival, don’t forget to visit Madura.

This festival comes from East of Indonesia, Maluku. Tidore Festival is held to celebrate the anniversary of City of Tidore. The cultural element is profound and tight in this festival. You can witness various kind of art performance from East Indonesia. There’s also annual ceremony and some traditional competitions.

Tidore festival also provides musical performance by bringing Debus music and carnival. This festival is usually held in three days in April. So, if you want to know more about East Indonesia, come to Tidore Festival in North Maluku.

There’s another big annual event in Yogyakarta and Jakarta that involves modern music. If it’s held in Yogyakarta, It’s usually held in Prambanan Temple and the committee usually invites various national and international artists. As the name of the event, this festival will be enlivened by jazz artist.

However, to gather boarder audience the festival has already include other music genre as well such as reggae, R&B, and soul. This festival is perfect for those who likes jazz music or music fans in general.

Every year the show brings different theme to make the show more exciting. You can march together with each defile and ask to take photo with them. This carnival is also a source to seek unique costume that will be worn by Indonesian representative in international beauty pageant. This carnival can be your option to spend your vacation.

Lastly, we have beautiful and unique festival from East Indonesia, Papua. The festival is called Festival Danau Sentani. This festival involves 16 tribes in Papua and has been held since 2007. This festival has purpose to celebrate the tradition in Papua no matter what the form is; art performance, art exhibition, and other form of cultural product.

They also open a souvenir market to tourist who wants to buy handicraft, Batik Papua, and local food to bring home. This event is usually held in June each year. So, if you want to watch the beauty of Papua, plan your time and budget before you visit here.

Those are some annual festival in Indonesia you should not miss. Each bring uniqueness and beauty from their own cultural root. That element is then combined with popular approach to attract more people. This type of cultural event could be a good attraction for International tourist and it will be beneficial for Indonesian tourism itself.

Megalithic Site in Gunung Padang: A Place To See The Past Time