There are many beautiful buildings and also historic on the island of Bali. In addition to being a famous and enchanting place, this island has a lot of high history and strong cultural customs. If you visit Bali will be able to feel how friendly and nuances of thick custom.

You can use the services of a tour guide to surround historic places and buildings in Bali or travel with friends and family. To be sure you will find many beautiful buildings, unique and also interesting.

In Bali, there are also many lodging centers and traditional foods that are suitable for you. A historic and entertainment center that presents plenty of natural beauty that satisfies your holiday.

To find out what the historical building in Bali is impressive and also phenomenal, here’s an example also the explanation for you: 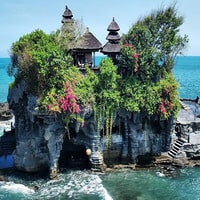 One of a historical building in Bali is Tanah Lot. Tanah Lot is a Hindu temple in Bali, Indonesia, which has a breathtaking natural splendor, it stands on solid sea rock overlooking the Indian ocean.

Pura Tanah Lot Bali is located on the shore of Tanah Lot and stands on a rock strong and strong coral sea, in the west there is also a temple called Pura Batu Bolong which also has a view that is not less beautiful.

This holy place is one of Pura Kahyangan Jagat, a very sacred and sacred temple and very guarded the sanctity and sustainability by the people of the Island of the Gods.

Tanah Lot is derived from the word “Land” which means land and “Lot” (Lod) which means the sea, because it is located on the sea or on the beach as floating when the tide can mean Tanah Lot means a Land or Island located in the sea, therefore people also call Tanah Lot. 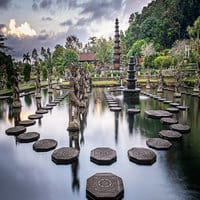 Tirta Gangga is a tourist park located in Karangasem, Bali. Before becoming a tourist attraction in Bali as it is today, this place was once a transit place of a King of Karangasem.

Tirta Gangga is dominated by 3 main buildings that become its character, that is Pond, Statue, and Garden. All of these buildings have an implied meaning. Water in Tirta Gangga Pond comes from the soil, not water refill as in the swimming pool in general.

According to locals, this water is the holy water they used to perform during traditional ceremonies. In addition to the swimming pool which contains statues, Tirta Gangga tour also has a swimming pool that allows tourists to swim there. Swimming that can be used for swimming is Sanih Water Pond. 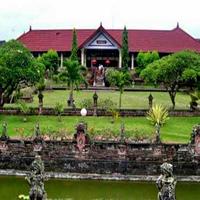 Semarajaya Museum itself is in a complex with attractions Kertha Gosa or Taman Gili. There are some collections of pre-historic collections in this museum, as well as objects used during the Puputan Klungkung war.

This museum is one of the museums as the historical building in Bali. The architecture of this building is unique because the Dutch style combined with traditional Balinese style. The building was indeed built by the Dutch East Indies government after the collapse of the Kingdom of Klungkung on April 28, 1908. 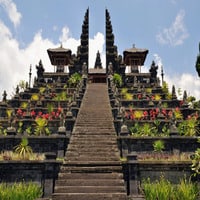 Besakih Temple is the largest temple in Bali that is precisely located in District Rendang, Kabupaten Karangasem. Previously, the place before the construction of Pura Besakih there is only woods in a jungle.

This temple is the forerunner to the existence of other temples in the complex of Pura Besakih.

There is an opinion that the construction of the temple began in Isaka 85 or AD 163. And became one of the popular and highly respected places of worship of Balinese society. 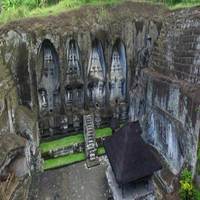 The historical building in Bali next is the mountain Kawi is not the name of a mountain as it does in the area of Java, but one of the sights of cultural heritage with some ancient relics of the temple composed of stones carved.

In addition to enjoying the scenery around the attractions, there are many historical values that we can know.

In addition to the temple, there is also a bathing pool and a water shower. Part of the western river temple group, there are 4 pieces. As for the other group is located in the east river there are 5 pieces. 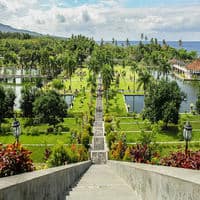 The development of Taman Ujung Karangasem is done by using the services of Dutch architecture van Den Hentz and architecture from China named Loto Ang.

Even so, this water palace building is made using Balinese architectural design. Construction of this palace initially is an extension of Dirah Pond which was built in 1901.

Construction of this water palace takes quite a long time. Just imagine, only in 1921, the construction of Taman Ujung officially completed.

Furthermore, the palace listed as a private ownership of the Royal family of Karangasem has created a marble inscription that reads in two languages, namely the language of Bali and Malay.

This Ujung Park is located in Banjar Ujung which is included in Tumbu Village area in Karangasem Subdistrict, Bali. To go to this one tourist place, the best way that can be used is to use a private vehicle rental services. 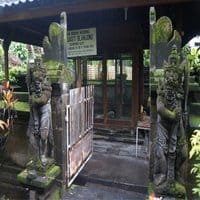 Blanjong Inscription is an inscription that contains the oldest written history about Bali Island. On this inscription mentioned the word Walidwipa, which is a designation for the island of Bali.

Blanjong inscription is unique because it reads two kinds of letters; namely the letters Pre-Nagari using the language of Ancient Bali, and Kawi by using Sanskrit. This inscription has become one of the historical buildings in Bali to date and is a fascinating attraction. 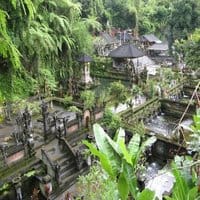 Tirta Empul is the name of a temple located in Tampak Siring district. Pura Tirta Empul visited by many tourists, both from foreign countries and domestic tourists.

Tirta Empul tourist attraction is one of the places where the holiday in Bali is a must visit.

In the temple of Tirta Empul, there are springs and also used by Hindu people, for the baths and begging the holy throne. Tampak Siring name comes from the word Tampak which means palm and Siring means tilt. Usana Bali one of the lontar that tells about the history of Tampak Siring Bali. The palm that is in the name of this tourist spot, is told as the palm of the king named Mayadenawa. 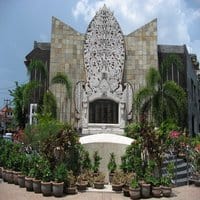 One of the most famous evidence of the historical building in Bali is the Bali Bombing Monument.

To commemorate this tragedy, the local government of Bali, built a memorial monument that was named Panca Benua Monument. For tourists, the memorial of the tragedy of Bali bombing 1, better known as Ground Zero Bali Monument.

Every year on October 12, many people who come from various countries, gathered at the Bali bomb memorial, to commemorate the Bali bombing tragedy. 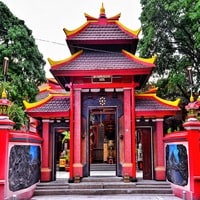 Vihara or Temple Dharmayana Kuta is the first temple and the only temple that I had visited during in Bali some time ago.

The gates of Dharmayana Vihara Kuta with three entrances and roof overlapped three. At the top of the roof is a golden stupa.

The Dharmayana Kuta Vihara Temple is above the central entrance. On the left-hand right of the outer wall is a beautiful painting relief, and in the background is a guard lion and a vihara porch pole that is surrounded by a green dragon.

So the explanation of 10 historical building in Bali, may be useful and see you later.

8 City with the Largest Population in Indonesia

8 Biggest Cities in Indonesia to Make a...

Where to Find the Highest Cities in Indonesia?