Home » Food and Beverage » 15 Tastiest and Popular Fruits in Bali

15 Tastiest and Popular Fruits in Bali

After talking about the varieties of flowers in Bali, the popular ones that everyone loves, we want to tell you again about another flora, or maybe foods that you can find in Bali. We’re not talking about the actual traditional meals like Chicken Betutu and stuff, but we’re gonna introduce you to the local fruits of Bali.

Fruits of Bali are included as tropical fruits, they can grow neatly in such a hot place like Bali. From this list, there are some names of the fruits that already familiar to your ears, becasue they are besically easy to find. But for the rest of them, maybe there’s few that new to you. So, here’s the list of popular fruits in Bali. 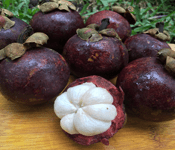 Well, let’s start this article with this mangosteen fruits. This fruit is actually pretty common in Bali island, especially on the areas of East and West side of Bali. It’s growing in there because of the green land that is very fertile for this kind of fruit.

People who inhabit the busy areas of Bali like Kuta or Uluwatu can get the Mangosteen on the fruit store of course, or if they traveling around, they might have a chance to meet the Mangosteen sellers, that usually havet their store on the road side. 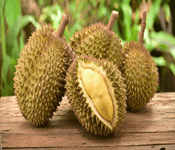 Next one is Durian. If the mangosteen above is called the queen of fruit, then this is the King of all fruits in Bali, so do the people say. The unique aroma and flavor is one of a kind, and many people actually like it, because they didn’t have the exact experience with the other fruits.

This fruit with its thick skin should be cut in half with a big knife. And then after cutting, the flesh inside can be eaten. Usually in a durian there will some of its flesh inside. The soft flesh and sweet taste it has is are hipnotizing anyone who wants to eat it. 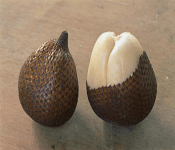 The third one on the list of popular fruits in Bali is Snakeskin Fruit. Indonesians called this fruits as Salak. The Balinese snakeskin fruit is actually consumed by both locals and foreign tourists who happen to have their holiday in Bali island.

There are some kinds of Balinese snakeskin fruit or salak in Bali, the most popular one sould be the Salak Gula Pasir or Sugar Salak. Even though the size of it is the smallest of all Salak in Bali, but ithas the sweetest taste. That’s why Balinese people call it Sugar Salak. 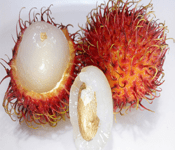 Do you have the experience of tasting the fruit of Rambutan before? This one exotic fruit of tropical country is can be found easily in Indonesia, and also Bali. In Bali, the people call it as Buluan. Maybe becuse of the Bulu (fur)-ish texture it has.

You can easily find the ripe one by looking at its colour. It usually will be bright red, the signal that the rambutan fruits is ripe and ready to eat. The fruit really has the sweet taste. Even though it looks like another fruit, lychee, but this one is much sweeter. 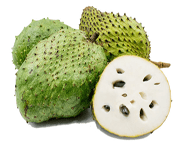 Next one is Soursop. Like the other fruits mentioned above, you can also easily find this Soursop by looking at the merchants who sell it. Especially when it’s the season of soursop, when many farmers bring so many soursop to town.

This soursop has a flesh that is pretty sour, but also somewhat refreshingat the same time. Many people even make a juice out of it, because it’s really great. Beside the good taste, it also has some benefits for humans health, like a prevent a serious kind of disease of cancer. 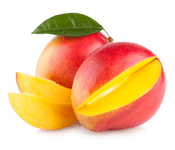 Mango is included as a seasonal fruit, especially in Bali. So, if you can’t find mango in Bali, maybe it’s not the season of mango yet. But some fruit stores in Bali also have them, even though not in such a large supply, only few of them.

The Mango season is usually between September til January. So, on the end of the year, you can have your mango smoothie for party all day long. You can even make some stuff from this fruit like salad, or the traditional Indonesian snack, rujak. 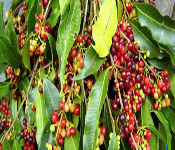 Boni is  considered to be included in berry type of fruit. With its unique sour and sweet flavo, Boni is mainly used by people for having some snacks like rujak or as an additional ingedient for making a fresh sambal. Some people also mixing this fruit for salad.

In the traditional markets around Bali, you can easily find on of these. But, if you doing some kind of adventure in Bali jungles, then you have chance to meet it on the tress. Be careful to get it though, sometimes the tree where the Boni fruit exists is very tall. 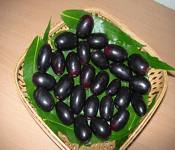 The next fruit on the list is Javanese Plum, which is slightly different than the usual plum. This Javanese plum or Juwet, is almost the same like fruit above, growing on tress. But usually for this one, the trees that used as place for Javanese plum to grown is bigger and denser.

You can pick it on a specific season only. The colour of varies. There’s one with pink, black, purple, and green. The ripe ones are pink and purple. People in Bai usually like to eat it as a snack, and it will turn their tongue to purplish colour for a while. This fruit is also loved by kids. 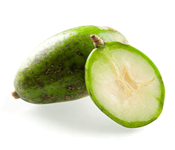 Ambarella or Kedondong is included as a tropical fruit. This beneficial fruit that is belived to have the abilites for curing digestion problems and preventing anemia is having the green colour.When it’s ripe, the colour will be much lighter.

Many people around Bali use this fruit as the additional for making a rujak. Especially for the rujak kedondong, with Ambarella as a main ingredient. But, anyone who wants to eat itdirectly surely can do it. But they should pay attention to the seeds though. 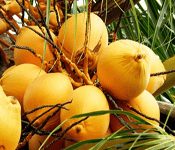 This fruit looks like a coconut. Even tourists who don’t know about this fruit yet is always thinking that this fruit that always hanging on a tress in group, is actualy a coconut. But they’re surely wrong. This Nyuh Gading is commonly used for ceremonial activities.

Nyuh Gading is actually taste better than the usual green coconut you ever tasted before. The flesh inside the thick skin is much more thin and also tender, easy to chew. Beside that, the water is more fresher and also has more flavor than the original green coconut tree. To buy it, you should like at the shops on the road side that usually located around temple. 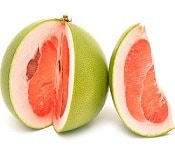 Unlike the other oranges, this Pomelo or Balinese Orange has bigger size. One can find this fruit one the modern fruit store or some stalls inside the traditional markets. It’s really thick and its texture is really spongy that tasted either sweet or bitter.

Beside the flesh inside, which is so large that can be consumed by two people. After eating it, the rinds should be saved to be a natural mosquito repellent. Beside that, in the hands of kids, the rinds can be processed to be a unique toy like car or boat. 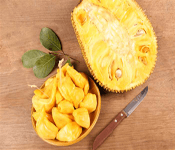 Aside from the famous durian, there’s one fruit that also havign strong scent, but less “hipnotizing”, a fruit called Jackfruit. In Indonesia people usually call this fruit as nangka. They also process this fruit into some products like jam, milk, and ice cream.

The skin is also thick as durian, but rounder and less sharp. The taste of the fruit is really sweet and can be used for another type of food. For example, there’s a dessert called Es Camput that also include a flesh of jackfruit in it.

The thirteen fruits above are not completed without addid two more fruits on this list of popular fruits in Bali to make it 15. So, here we add the two special fruits that people can enjoy while they having their fun in Bali, the first non familiar fruit, and one familiar.

So that’s the list of the popular fruits in Bali. For you the vegetarians, or the people who just like to eat some fruits, then you can get some excitement when finding something new in Bali island. Those fruits will give you a new taste and really boost up your experience in culinary journey.

They can also used for juice, and the taste is so much wonderful. It’s also pretty easy to get them. Beside the fruit shop of course, you can get a cheaper price by visiting the traditional market around Bali. You can even do a bragian if the price is not suitable for you.

Is It Safe To Travel Around Indonesia? 13 Proper Answer for You