Home » Governance » 10 Reasons Why is Indonesia Important to the US

10 Reasons Why is Indonesia Important to the US 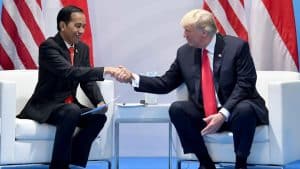 The role of Indonesia for US has recently become increasingly important, especially to offset the strength of China, Russia, Japan and India in the region. In the future Indonesia can become a mediator meeting the interests of all the major countries in Southeast Asia.

US service exports to Indonesia have risen by more than 70 percent in the past decade and now amount to $ 2.5 billion. Import service from Indonesia reaches $ 780 million by 2015. In 2016, Indonesia is the 35th largest export market for goods in America.

Indonesians want their American counterparts to place a trade deficit in the perspective of Washington’s relationship with an economically self-sustaining country, and ready to consolidate its regional position as a member of the Group of 20 nations. The country has enjoyed steady economic growth in the last 10 years. The World Bank has predicted that Indonesia will become the fifth largest economy in the world by 2030.

In the struggle against terror, Indonesia and America have a common interest for their respective successes. The defeat of ISIS in Iraq and Syria has been unlikely to happen without US support. Likewise, Indonesia deserves American attention as Southeast Asia is preparing to restore dissident rebels from West Asia. The prolonged siege in Marawi city in the Philippines reveals how violent international pirates are acting in the name of religion, how deep and efficient the network of financing, military training and their capacity for terror.

Indonesia is the only ASEAN country that is a member of the G-20 (or Group of 20). The countries in this group consist of 19 countries plus the EU; controls 75% of world trade. Indonesia also becomes the big trading markets US since the bi population of Indonesia. For this reason Indonesia became a major US investment destination.

Indonesia also has a training center for the preparation of peacekeeping troops with world-class facilities. Indonesia has good leadership in Southeast Asia, including in terms of significantly enhanced peacekeeping training. Indonesia has sent 4,000 troops to engage in peacekeeping forces. It’s an incredible achievement. This prompted the US to seek cooperation for joint exercises between Indonesian and American troops.

Indonesia and the United States work together in the field of EKonomi. The advantage of this partnership is that America has many experts in economics. In addition, America is a potential market for Indonesian export products because America is a dominant market in the world that invests heavily. While Indonesia is a producer of oil and gas, as well as manufactured products.

Indonesia’s stable economic growth each year has put this country into one of the world’s economic power. The success of Indonesia into a global power economy is not separated from Indonesia’s development capital. Indonesia is a country that has a very complete development capital, ranging from abundant natural resources (SDA), qualified human resources (HR), stable democratic climate, and strategic geographic location.

Cooperation between Indonesia and the United States is not only important for both countries, but also for the world. This is because Indonesia is a country with the largest Muslim population in the world and plays an important role in Southeast Asia. With the largest Islamic population in the world and has tolerance and moderation. For this reason Indonesia’s opinion is always considered important for Indonesia to determine attitudes toward Asia-Pacific countries.

After ending the war in Iraq and Afghanistan, the United States shifted its focus of security interests into the Asia Pacific region. That is why more than half of the US marine military forces are now assigned to operate in a region consisting of various countries, including Indonesia.

The operating areas of the Commanders of the US Military Command in the Pacific Region (PACOM) include Asia Pacific, East Asia, and South Asia. PACOM is equipped with one-fifth of the total US military power and will lead 60 percent of the US Navy’s fleet. Currently, the US military fleet in the Pacific is reinforced by five aircraft carriers with support forces, namely 180 ships, 1,500 aircraft, and 100,000 active military personnel.

No matter what Indonesia is still important for the most super power country in the world: US. Vice versa, US is also becomes very important to Indonesia. It is because both of countries need each other to support their economy and politics.

12 Reasons Why Indonesia is Important to India

13 Reasons Why English is Important in Indonesia