Home » Place » Forest » 10 Province with the Worst Deforestation in Indonesia 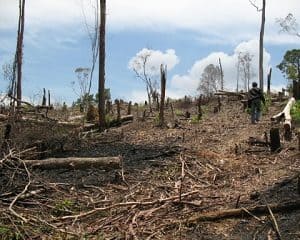 The forest in Indonesia is the world’s lung because Indonesia occupies the top ten as the largest forest owner in the world. Unfortunately, the world’s lung predicate is now reversed into a world poison because some cases of deforestation and forest fires cause natural balance disturbed.

Forest and land fires in some areas of Indonesia are of particular concern and should be wary of the current dry season. Impacts caused by landslides and forests vary, destroying ecosystems. In addition, fire smoke can be an air pollution that disturbs health. The government noted at least 10 provinces in Indonesia with the worst deforestation level. Here is the lists of them.

The rate of deforestation or logging of forest cover in West Sumatra throughout 2015 was recorded at more than 3,600 hectares. For activities of ‘illegal logging’ or illegal logging between 200-300 hectares scattered in various city districts, including the city of Padang with quite a lot of points.

In addition, 540 hectares of other forests were reduced due to the activity of clearing agricultural land and plantations by burning land. The highest forest area encroachment was donated by oil palm plantation companies to expand the plantation area or to open new plantation land, recorded more than 2,000 hectares. The West Sumatra Indonesian Forum for the Environment (Walhi) considered the rate of deforestation in the province to be in the alarming category. Deforestation as a result of forest control by the government is weak.

Forest damage to the Leuser Ecosystem Area (KEL) in the province of Aceh continues to increase due to new land clearing and illegal logging. Three districts in Aceh Province that have suffered severe forest damage are: Nagan Raya Regency, East Aceh, and Gayo Lues.

Forest damage in the Leuser Ecosystem for January to June 2018 is 3,290 hectares. This is based on the results of monitoring using remote sensing technology from satellite imagery. Based on data and visual evidence, the three districts that experienced forest destruction on KEL were from January to June 2018 with details of Nagan Raya 267 hectares, Aceh Timur 559 hectares, and Gayo Lues 507 hectares.

Illegal logging in the Tahura Sibolangit forest, Deli Serdang Regency, North Sumatra, continues. The Karo Surbakti indigenous people, were so upset that they confiscated hundreds of cubic of wood and handed over to the North Sumatra Forest Service Forest Police. They also measure the damage to the Tahura forest and are estimated to reach more than 600 hectares. The measurement was done for two weeks.

The logging of the protected forest area in Tahura took place during 2014. According to residents, heavy forest destruction equipment continued to be seen and worked day and night destroying the Tahura Sibolangit forest.

Illegal logging in Jambi continues to this day and is difficult to eradicate due to easier access to forest areas amid the rapid development of plantations and industrial timber plantations (HTI). The main causes of deforestation or reduced forest cover in Jambi so far are illegal logging and other causes, forest encroachment and forest fires.

The forest area in Jambi, which until now is in damaged condition, reached 934,000 hectares (ha) or around 44 percent of the 2.1 million ha of total forest area in the area. The repair of forest damage in the area is relatively slow due to the lack of forest rehabilitation budget and the greening program owned by the local government.

Do you remember the big flood of Papua in 2014? This flood is suspected to have affected the forest from being completely destroyed around the river border. The surrounding forest has changed oil palm plantations. Piles of sand material on the edge of the river used to block the overflow of water, broken. This pile of sand was excavated by PT Medco Papua Hijau Selaras (Medco), the palm oil company owned by Arifin Panigoro. Meanwhile, the rain still hit Manokwari especially in the upstream area. Piles of sand eroded.

Floods never hit this area. The floods have only hit since Medco cleared the forest in the river border and replaced it with oil palm. That is why forest degradation in Papua has a big impact on the environment.

The Indonesian Forum for the Environment (Walhi) of West Kalimantan, assessing the destruction of forests due to illegal logging and the expansion of oil palm plantations in the province has become the world’s attention. In fact, continuous forest exploitation is still carried out by the West Kalimantan government both directly and indirectly, such as the expansion of oil palm plantations and the omission of illegal logging.

The expansion of oil palm plantations since 1980s to 2009 has 229 companies that have palm oil expansion permits with an area of 3.57 million hectares, but only 318,560 thousand hectares have been realized. In addition, the impact of oil palm expansion is also damaging the Kapuas watershed which is a source of water for some people in West Kalimantan.

The next bad forest is in South Sumatra Province. Forest damage in the province which has 17 districts and cities is caused by natural and human factors. Of the total forest area of around 3.5 million hectares in South Sumatra, more than one million hectares of which have suffered minor and severe damage. Forest damage caused by natural factors such as fires in the dry season, while human factors such as timber theft or logging without permits.

The rate of forest destruction in Papua is increasingly alarming. Natural forest has now changed its function to oil palm. If not immediately restricted, Indonesia’s natural forests could be threatened with extinction. Biofuels which are considered as saviors of renewable energy needs, in many places become environmental ghosts.

As the population increases and there are many human needs, lately the forests in Southeast Sulawesi have begun to experience an alarming situation. This is because many parties are not responsible by using the forest in a large scale or over exploitation without regard to the impacts that will arise in the future if the forest is damaged.

There have been many problems about the forest that have happened, and still until now it has not been resolved completely. For example, the problem of the Warangga forest in Raha, which until now has not been clear, whether the forest is a protected forest or a production forest. Now the forest is just a name, before that the forest was overgrown with teak trees that were very stout but now there are arid expanses of land due to illegal logging and the opening of plantation land by the surrounding community.

The province with the worst deforestation is Riau. 1,052 hectares of land and forests in Riau Province were burned down in 2017. The total area of land burned is calculated from January 2017 to July 2017. In Riau, in 2009-2012 natural forest loss was 0.5 million hectares, with a deforestation rate of 188 thousand hectares year. Deforestation in the past three years, is greater than the rate in 2005-2007 of 160 thousand hectares per year. This figure shows that there is no significant reduction in deforestation and degradation.

After reading them all, you can conclude that forests in Indonesia are in critical status. The government and Indonesians must do much effort to conserve the ecological system of forest in Indonesia. Forest is not only lungs of the earth, but also life for hundred species of animal and plantations.

12 Examples of Culture Shock in Indonesia You would Experience