Indonesia eraing the name of the country that has so many beautiful things, starting from the natural gifst up to the traditional arts made by its people. The thing to remember is, Indonesia is placed in a dangerous spot.

Having a lot of mountains, making Indonesia became a ring of fire. Not only for the mountains, beneath the sea, there are also eath plate drifting, causing much damage to the ecosystem above. For example, you can look for the example in the most dangerous region in Indonesia, Sumatra island that can be found below :

As the starter to talking about the natural disasters in the land of Sumatra, Indonesia, it all happens with the quake in the eyar of 1833. During the colonial Era, there’s one memorable quake that happened in the corner area of Indonesia, just some kilometers from the center of Sumara island. Eventually, the cause of that destructive quake that destroy mostly the western side of Sumatra island was found. It was the break of the earth segment plate few kilometers under the sea. And the disaster not only ended there, there was another great disaster waiting.

2. Tsunami After That Earthquake, West Sumatra 1833

Because of the quake that happened, there’s Tsunami forming for about 7 – 9 meters. That tsunmai is so gigantic that said almost destroyed all the buildings in the location of Pariaman to Bengkulu. Not only Indonesia, the tsunami also caused much destruction in other countries like Thailand and also Australia. Because of the age, there was no documentation of the disaster. The number of casualties dan the total damages remain unknown up to this time. 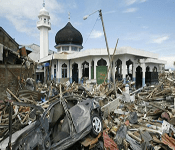 The next one, after long years being safe in the islanf of Sumatra, the Aceh people finally feel how scary it is when there’s destruction everywhere. It was unpredicted. In the calm and peaceful morning, suddenly there was this quake that going for some times.

The quake was there, breaking everything on the island, going for about several hours, starting at 10 am in the morning, when people start doing their activity in the weekend. And suddenly, there’s this 9,3 richter scale quake that shaking everything up. 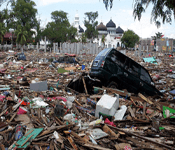 Not long after the quake, there was this broadcast or warning about tsunami. The people on the beach make a run first, telling the people up close the water start srinking. With that panic situation, all of them search the high ground for cover.

But, because of the late news, the people on the city still confused about the condition. Some of them started to run away looking protection, some abandoning their lost family in the situation. Because of this combined disaster, 131 thousands dead dan 37 thousand people were lost. 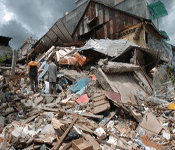 The next quake disaster happened on the area of West Sibolga, Sumatra. Even not strong as the quake back in the year of 2004, this quake is still making a lot of destruction throguh the city, especially for the Sibolga area.

This quake happend when people still fall asleep, the hour of 11.0 p. Having the 8,7 richter scale, the people sudddenly up from their bed and looking for help. The shaking also can be felt around other South Asia countries like Thailand. Casualties, 2 thousand people. 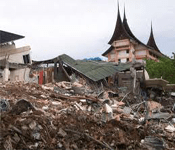 Four year prior to the previous quake above and two years from the quake in 2007, there was another quake happened in the year of 2009 at 7,6 magnitude from 50 kilometers from Padang city. The casualties of this quake were lesser than previous quake, which numbered 1.117 dead.

Beside the dead, the quake also caused so many people suffered. It was noted that around 3 thousand people having injuries, and only one person was los. But, the financial damage becuase of this quake was unbearable. 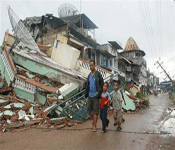 One year after that, the quake happened again, but this time, the quake was happening not in the capital area of Sumatra, but from some kilometers from the island, which is Mentawai islands. For you who don’t know, it’s a small group of island located near the central Sumatra.

With the 7,7 magnitude, the quake has the potential of summoning big tsunami to the islands. The quake itself caused much damage to the infrastucture of the islands. For example, there are several villages that were destroyed prior to this quake. 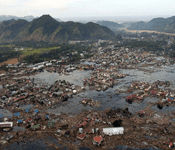 After the quake happened, there was the tsunami warning going around, sadly for a short time. Not too long after that, the government pulled out the warning and considering the islands are safe again. But, they were wrong.

That quake caused the tsunami with the high around 3 until10 meters high. Because of that tsunami, many people filled with some villagers inside were destroyed, sweeped by the gigantic horrifying tsunami wave. 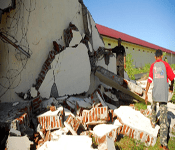 Some years after the quake in 2010, the quake disaster sadly didn’t stop there. Back in the year of 2012, there was another quake that happened, that can be felt by all people in Sumatra island. Was the quake that strong? Oh yeah, it was.

The quake has like 8,6 magnitude, that strong making all peopple in Sumatra island felt that shake. But, fortunately, the quake didn’t cause much casualties. Only 5 people found dead because of heart attack, 1 person critically injured, and six persons having small injuries.

That 8,6 quake caused the rising of the sea waves. Noted, there were some discoveries in some of the countries like India. But, the waves not reaching very high in height, only for about 3,9 meters that hitting the beach lips and houses around the beach.

For the tsunami, there was no single casualty that can be found in the record, because the effect of the quake was not that great that can not causing gigantic tsunami. Releive for the people of countries, but lifting a but of trauma for the Sumatran people.

Next natural diseases can be found within these dates, starting from the year of 2004until the late year of 2007, happened few months for now to be exact. All the records all included in the small list below :

So those are the list of the natural diseases in Sumatra Indonesia. It’s true that all of them are really dangerous for the life of people. Seeing the tragedy that happened in 2004, the pain is still can be found within every survivor of that disaster. Those can be the things to remember that the nature is a really powerful thing that can crush anything easily. For us the people, maybe it’s time to repent.

10 Types of Tea that Grown in Indonesia