The influence of Chinese culture in the archipelago has been felt since the 13th century to the present day. Many ethnic Chinese or better known as the Tionghoa marry with indigenous peoples who produce the offsprings called “peranakan”. Beside the marriage, there are many other cultural acculturation.

The influence of Chinese cultures in Indonesia can be found around us. Those are : 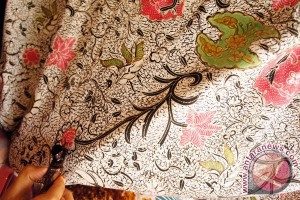 Chinese Batik is a type of batik made by Chinese or peranakans who originally displayed patterns with Chinese mythical animal rags, such as dragons, siangs, phoenixes (birds of hong), turtles, kilins (lion-headed dogs) , as well as the god and goddess Kong Hu Chu.
There is also a variety of ornaments derived from ancient Chinese ceramics, as well as decorative mega-shaped with red or red and blue. (read also: history of batik Indonesia)

In its development, Batik of China revealed more diverse patterns, like patterns with the influence of Batik Keraton as seen in Batik Dua Negeri and Tiga Negeri. (see also:  Indonesian Ikat Fabric )

The Chinese Batik development area covers both coastal and inland areas with environmental-influenced nuances. Those areas are Cirebon, Pekalongan, Lasem, Demak and Kudus. Lasem is renowned for its local shawl (phoenix) as its main ornament, while Demak and Kudus have distinctive features in the background, such as “grain sinawur”, “dele kecer” and “mrutu sewu”. (see also: Most Beautiful Fabric in Indonesia)

Pekalongan as a place for Chinese Batik companies to produce the “best” works such as Oey Soe Tjoen, The Tie Siet, Oey Kok Sing and others, have a characteristic of Dutch-influenced products. 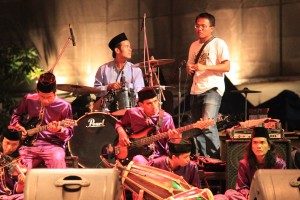 As for the culture of Indonesia which is a mixing or a combination with Chinese culture, the orchestra gambang kromong is one of them. The gambang kromong orchestra, originally favored by the Chinese peranakans at the time of the 18th century, gradually also enjoyed by indigenous groups, due to the process of assimilation.

Physically, the Chinese element can be seen at the stringed instruments of Tehyan, Kongahyan and Sukong, while the instruments of indigenous elements are Gambang, Kromong, Gendang, Krecek and Gong. The combination of the two elements of culture is also seen in the treasury of their songs, songs that show indigenous traits such as Jali-jali, Surilang, Lenggang-kenggung kangkung and so on.

There are also songs that clearly in Chinese, either the name of the song or the lyrics like Kong Jilok, Phe Pantaw, Sipatmo and so on. The name for the notes also comes from the Chinese language Syang or Hsyang, Ceh or Tse, Kong, Oh or ho, Uh Lio or Liu and Suh. So it can be concluded that the arrival and presence of Chinese in Indonesia brings a lot of influence into Indonesian culture. 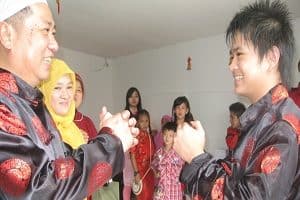 The words are very synonymous with the language Betawi. According to historians, it is because of Betawi and Chinese people already socialize, either as friends, friends, business relations or employer-employee relationship. 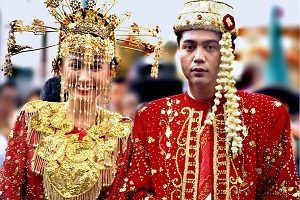 You can also found some clothes with chinese batik motive. They usually worn on special ceremony. Many actress even wear them, and show it to public proudly. That’s why many people like them, because the acculturation of chinese and indonesia in some of the dress is beautiful to see. 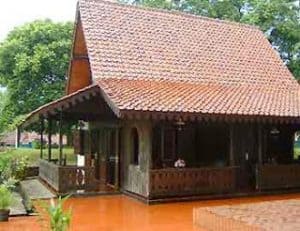 In the field of architecture, Chinese influence is also strong enough to influence the Betawi people when building a house. The front of Betawi’s house is decorated with a barrier in the form of a langkan (China: lan-kan, red). Then to make it looks beautiful and not dull, doors and windows should be painted annually.

On the wall, there’s hanging bell (lo-ceng). The occupants of the house sleeping in pangkeng (pang-keng) or ‘bedroom’. Before going to bed people would want to kongko (kong-kou) or ‘chat’ first while drinking tea (te) and eating kuaci (koa-ci). While Ta’pang (tah-pang) ‘balai-balai’ or ‘mat’ is used to lie down while relaxing.

For cooking in the kitchen there is langseng (lang-sng) which means ‘dandang’, also an anglo (hang-lou) ‘fireplace with charcoal’. The table can be cleaned with topo ‘(toh-pou) or’ lap table ‘, or wear a duster (ke-mo-cheng) made of chicken feather to remove the dust. To collect garbage that has been swept, there is pengki (pun-ki). While in places muddy people used to wear clogs (bak-kiah) or clogs. 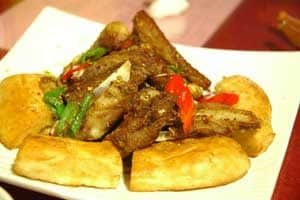 There’s also capcai, which is the mix of vegetables added with thick sauce. Its pretty good though, and many indonesian like it. Capcai usually served with fried rice, which is typical food of Indonesia. The combination of both is pretty amazing.

There are several shows which commonly held and can be seen in Indonesia based on the growth of Chinese culture here, as follows: 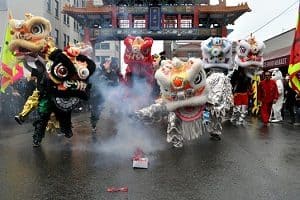 In the celebration of Cap Go Meh, Barongsai attraction happens in various regions in Indonesia, continues to be held from place to place.

Generally the one who order it is Chinese as well, but not infrequently they are ordered by non Chinese as well. The goal may be different, if the Chinese to hope of blessing and expressing gratitude, while non-Chinese people just because they like the Barongsai, maybe just for entertainment.

Cap Go Meh is the fifteenth day after the Lunar New Year which on that day becomes the peak day of the new year anniversary. On that day there will be rituals and prayers at the monasteries. Meanwhile, Barongsai, is actually the acculturation of Chinese culture in Indonesia, because the term Barongsai only exist in Indonesia. While in China, its only known by Liong Samsi or often known as the Dragon Festival. 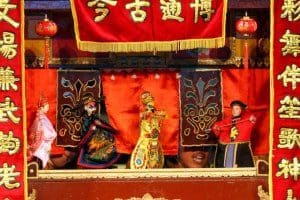 Potehi puppets are one of the typical Chinese puppets from southern China. This arts brought by ethnic Chinese migrants to various regions of the archipelago in the past and has become one of the traditional arts of Indonesia. The stories shown are derived from Chinese folk legends, such as sampt engthay, djienkoei, capshathay poo, sungokong, etc. 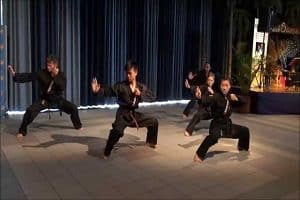 There’s also a creation of the acculturation in the world of martial arts, Kuntao is a perfect example. Kuntao or kuntau is a Hokkien term for martial arts created by the Chinese community in Southeast Asia, especially in the Malay Archipelago.

Overall it means “fist path”, kuntao word is more accurately translated as “template”. Although, most often practiced in Malaysia, Indonesia, Singapore, and the Philippines. This is a Chinese martial art brought by traders, laborers and other settlers from southern China.

It styles must be adapted to different terrain, competing locally and fighting with local weapons. Many (or maybe mostly) kuntao styles have incorporated techniques from silat (traditional indonesian martial art) and some form even rename them from “kuntao” to “silat”. The style that combines both kuntao and silat together is sometimes called kuntao silat.

After all of those things, now the time will come to end our information about the Chinese Culture in Indonesia. The beautiful yet unique culture of China in Indonesia, you can find it all around you. You better check them out if you haven’t. Okay, enjoy it and have a great day !

Top 9 Best Nightlife in Indonesia (#6 is Amaze you)