Home » Fauna » 12 Facts of Indonesian Zoo You Should Know

12 Facts of Indonesian Zoo You Should Know 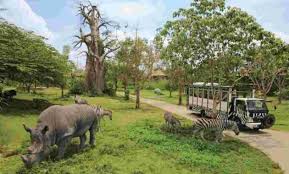 The zoo (often abbreviated as bonbin in Bahasa Indonesia abbreviated from “Kebon Binatang”) or wildlife park is where animals are kept in an artificial environment, and shown to the public. In addition to being a place of recreation, the zoo serves as a place of education, research, and conservation sites for endangered species.

Animals kept in zoos are mostly animals that live on land, while water animals are kept in aquariums. Perhaps you have heard some bad news about the Facts of Indonesian Zoo, moreover, you have to see this page to see the details.

Approximately 90 percent of zoos in Indonesia are unfit for habitation. It does not see who the managers, private or the country alike. Some wildlife parks that spread in Indonesia often treat animals with arbitrary. The cages are not big for animals, dirty places, lack of access to food and water. Moreover the treatment of officers who are less concerned about animal rights, and the behavior of visitors who are not reprimanded by the manager.

A number of endangered species died at the Surabaya Zoo for various reasons, from illness to neglect. That’s why this rare animal conservation place was once dubbed the World’s Cruelest Zoological Garden. Some world news sites have even exposed the atrocities at the Surabaya Zoo. More than 150 pelicans are in one cage with a small pool that makes them unable to expand its wings, especially to fly.

A travel search site once released the Travelers’ Choice Awards 2015 best zoo category in Asia. In the list of winners there is Batu Secret Zoo from Batu Town, which is the only representative from Indonesia. That is, Batu Secret Zoo is the best zoo in Indonesia. The award was not exaggerated. The atmosphere is neat, clean, educative, and creative. It is really modern and much different from the impression of a dirty zoo and full of garbage that often found in other cities.

Many tragic stories of the death of rare animals in Indonesia. Including the only remaining Giraffe, who died after swallowing nearly 20 kg of plastic waste. The garbage is believed to be thrown into the cage. Free-feeding visitors and zoo Surabaya officers who carelessly caring for animals in this zoo make these animals suffer and eventually die just like that.

Some of the cages in the Indonesian zoo are still not feasible. The Sumatran tiger is one of the most compulsory protected animals in the world because their species are threatened with extinction. Not well cared for in a good and healthy cage, the Sumatran tiger in Surabaya Zoo must be willing to live in a stone cage like a prisoner. It could not see and feel the sunshine and could only observe the outside conditions of a small window and roar inside the darkened enclosure. What an unfit condition for a Sumatran tiger.

The monkey should be living in the wild. If they had to stay at the zoo, it would have to be in a decent cage with a vast location and lots of trees for them to jump energik.Tapi what happens to the monkeys in this zoo? They are placed in a cage surrounded by murky water with dead tree trunks in the cage.

There was an incident happening at the Gembira Loka zoo in Yogyakarta. One worker embezzled the purchase of meat for the five tigers of the zoo. Worker action had been going on since April 2015-February 2016. Moreover, the crime was not known long enough by the manager. Amount of  IDR 90 million that should be for the budget allocation of the tiger turned into the pockets of unscrupulous employees. The result, the feed for the tiger is not taken care of. And the tiger grows thinner day by day.

Pematang Siantar is the most complete zoo in Indonesia. The collection of animals in this place reaches up to hundreds of species. Starting from the mammal species around 51 species and the number reached 201 tail. For aves species reached 113 with the number reaches 455 heads. For reptiles reach 19 species and 59 tail. So the total animals that occupy this zoo reached 183 species with the total number 715 animals.

In some zoos in Indonesia there are even a variety of events to attract visitors such as, animal performances (animal show), photos with baby animals, and riding animals. Behind the excitement offered by the zoo, there is a tribulation that must be passed by the animals. They have to go through several trainings with various techniques so that the animals follow the instructor’s instructions.

Techniques usually used to train animals are, make animals starve, isolate animals from parents or friends, some of the animals even tortured so that animals fear the trainer. After the animals feel tired and not strong, the new animals will follow the instructor’s instructions to perform certain tricks.

To take pictures with animals, some of them should be given sedatives such as drowsy drugs so that animals are not harmful to visitors. When the animals are tired and sleepy, the animals will be forced to get up to take pictures. It was recorded by one of the visitors at a zoo in West Java.

Many zoo visitors in Indonesia still do not understand the rules at the zoo. Some of the visitors still feed the animals there, regardless of the rules they make. In fact, too often giving food to animals can make animals feel comfortable with the open. Though their main place is open nature.

Those are the facts of Indonesian zoo. Altough some of them are terrible bad news, it should be a pride for Indonesians knowing that our country have the great biodiversity. It is a prove that Indonesia are the rich country with a lot of various flora and fauna.