Indonesia is a country of pluralism, a country with high tolerance and the heaven for cultural values. Indonesia has an uncountable amount of cultures range from Sabang until Merauke, all of them are valued as the national treasure even until now.

Surprisingly the local cultures are not only well known among the Indonesian, some cultures are acknowledged and famous in the global world. The main value of Indonesian culture lies on its authenticity and originality. The cultures are functioned as the nation’s identity and it succeed to capture the non-Indonesian hearts as well. 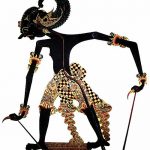 Wayang has been known since the pre-history era in 1500 b.c. Balitung inscriptions that existed since the 4th century proved that wayang existed since hundred of years ago.

During its development,  there are several types of wayang such as wayang kulit, wayang golek, as well as wayang orang.

The story line is developing and getting more interesting. On November 7, 2003, UNESCO also acknowledged wayang as one of Indonesia’s cultural art in the “Masterpiece of Oral and Intangible Heritage of Humanity” list. Until now, wayang performance is still exist. 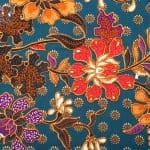 Batik Indonesia, including its culture, technique, and development of motive and technology, has been declared as Humanitarian Heritage for Oral and Nonbendawi Culture by UNESCO on October 2, 2009.

Initially, batik was first introduced to the world by former President of Indonesia, Soeharto, who was wearing batik at the UN Conference. Batik itself is not only refer to as a cloth that is made through traditional staining techniques. However in Javanese traditional culture batik is a meaningful thing. Until now, batik continues to develop, both on the motive as well as the production process. 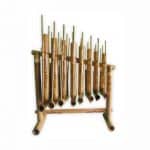 Angklung is a multitortal musical instrument (double pitched) that traditionally developed in society.  This instrument is made of bamboo, the instruments will produces sound when someone shake it (sound caused by bamboo pipe body clash).

It produces a vibrating sound consecutively. Angklung  Indonesia has received official recognition from UNESCO as part of the cultural heritage. The official certificate submission was held in Jakarta on January 19, 2011.  Angklung is very popular abroad. Countries such as Korea, Japan and Malaysia. Has introduced angklung to school-age children. 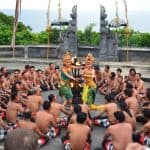 Kecak Dance is usually referred to as “Cak” dance or fire dance (Fire Dance) is a massive dance or entertainment dance and tends to be the dance drama dance as it all depicts the role art of “Panganangan puppet” like Rama Sita.

Kecak dance is  is not specifically used in Hindu religious rituals such as worship, and other ceremonies.

The forms of “Sacred” in this kecak dance are usually shown in terms of kamanuhan or masolah which refers to the invisible immunity so human will not get burned by fire.

Unlike other Balinese dances that use  gamelan as accompaniment music, kecak dance performance only combines art from the sound – the sound of the mouth or shouts like “cak cak to cak cak”. 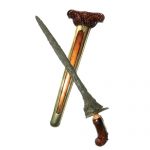 UNESCO declared Keris a “Masterpiece of the Oral and Intangible Heritage of Humanity” on 25 November 2005.

Keris is a traditional Indonesian weapon believed  to contain supernatural powers. The kings in the archipelago made the keris into a heirloom weapon.

Keris has been used since the 9th century, it was made with metal and the handle is made of bone, horn or wood. Keris is made from quality metal. The ancient keris even use meteors that fall to earth particle as the metal. 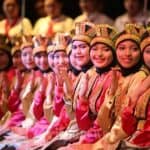 Saman Dance is a traditional dance from Gayo tribe . The dance is performed to celebrate important cultural events. The song that is accompanying saman dance has lyric that contains  Arabic and Gayo language.

Saman dance is one of the most unique dances because the main attraction only rely on hand clapping.

It is  is officially recognized and included in the list of non-object cultural heritage that requires the urgent protection of UNESCO, at the annual grand session attended by more than 500 delegation members from 69 countries, international NGOs, cultural and media experts in Bali from 22 to 29 November 2011. 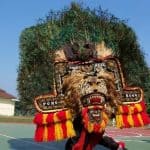 This art is still thick with things that are related with mystique and the occult.

The most popular story of the origins of reog is when one of the servants of the Majapahit Kingdom in the fifteenth century, named Ki Ageng Kutu garnered public support for rebellion by using reog.

Reog is one of the cultural arts originating from East Java to the north-west  meanwhile Ponorogo is considered as the real home town of Reog.

Ponorogo city gate is decorated by the figure of warok and gemblak, two figures who participated in the show. Reog is one of the regional cultures in Indonesia is still very thick with things that contains mystical values. 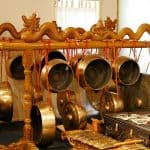 Gamelan is an original Indonesian culture that consists of  several musical instruments such as saron, gambang, drum, and gong.

Growing up in the Hindu-Buddhist era, gamelan becomes a perfect match to accompany Javanese arts. It becomes an attraction  that make many guests love the performances that use  gamelan.

Actually gamelan itself means tetabuhan that is played by hitting technique. In order to preserve this cultural heritage,  the Indonesian government proposes gamelan as an Indonesian cultural heritage. Finally it is officially recognized by UNESCO in 2014. 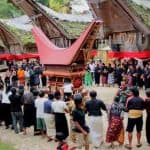 Different with the others, rambu solo is a culture of death tradition in Tana Toraja. This festival becomes the most expensive funerals ceremony in the world.

It is considered as the most expensive funeral in the world because the family that is left needs to sacrifice huge amount of money to hold this ceremony.

Hundreds of buffaloes will be slashed during this ceremony and the corpse will be brought to the top of the cliff to be buried. 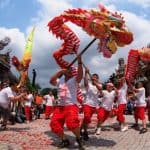 It is not only the native culture of Indonesia that is interesting to witness but also the foreign culture that has been absorbed and become a new culture in Indonesia.

This can be seen at the Cap Go Meh festival in Singkawang, Kalimantan which is thick for its Chinese culture.

You can see a colossal parade of Chinese culture combined with indigenous culture of Borneo as well as hundreds of Tatung (The people who possessed God according to Confucian religious beliefs) are paraded during the parade.

Indonesia has a lot of things that are not owned by other countries therefore some of the cultures have many fans in international world.