10 Types of Batik Printing in Indonesia

Batik is a painting art comes from Indonesia which has been nominated as the Masterpiece of the Oral and Intangible Heritage of Humanity by UNESCO since October 2, 2009. There are several types of batik printing distributed in Indonesia.

Basically there are three methods to make batik: printing, cap, and write. Batik is named after Javanese term amba which means writing and titik which means dots so amba is combined with titik means writing dots (on the cotton). The types or motives itself is influenced by each origin place’s characteristics, noted that there are more than 30 batik printing motives in Indonesia. 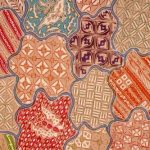 This motive is very typical in Indonesia especially in Yogyakarta. This motive is also called as Batik Yogya, sekar jagad means beauty which has the ability to amaze those who look at the motive. The motive itself is focused on making it looks like small islands which represents the the world’s map.

Sekar jagad overall appearance is basically flowery with color variations on each part. The development of this batik motif begins in the 18th century and it is still exist until now. The valid reason why this motif is still popular lies on its beautiful charm. 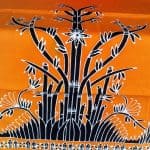 You could identify it easily about where does this motif come from, Magetan, just like its name. The basic of this motif is bamboo drawing, has traditional pattern and symmetrical curves.

This motif is highly influenced by traditional culture and tend to be more feminine the bamboo drawing itself is influenced by the local culture because there are lots of bamboo trees in this region.

Not only that, the bamboo drawing is combined with flora and fauna with fresh color. The philosophical explanation about bamboo, it grows in a group, means that human as a social creature needs to maintain harmony and togetherness. 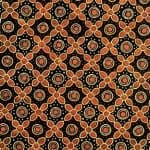 This motif is very exclusive in the past therefore this motif only used by sultan and his family, ordinary people were not allowed to use this motif. However due to the current development, that regulation is revoked an the people can wear batik with batik kraton motif. This motif is founded by the princes and princesses of Yogya Palace. See about The History of Batik Indonesia

The example of batik kraton motives are Nitik and Grompol, this type of batik conveys a message of blessing such as happiness, good luck, living a harmonious marriage, and children. People usually wear this batik type to attend wedding ceremony.

Jepara is the birth place of Kartini, an Indonesian woman therefore this batik type is often called as batik Kartini as well. Basically there are two types of batik Jepara printing: the old & the new motif.

The old batik jepara motif has pattern with dark color like black, brown, dark green, etc. Meanwhile the newer motif of batik Jepara is more varied on pattern and color.

Batik Jepara is adopting the elements of Jepara carving to strengthen the local culture by pouring the artwork which is connected to each other. There is batik community in Jepara which supports membatik activity to stabilize emotion because painting batik requires extra patience. See also Javanese Batik Fabric 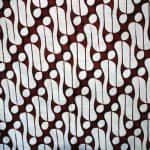 Batik Solo or batik soga has brownish colored motif, it applies traditional concept with natural coloring ingredients. The motif drawn in batik Solo depicts Bengawan Solo river’s wave which bring peace, as we know that Bengawan Solo is a popular river in Solo.

Paku Buwono III assigned the people in Solo create a batik motif which reflects Solo people therefore this batik Solo motif emerged based on the local people’s creativity. During that time, batik motif parang and batik sawat are only allowed for the honorable people in palace.

Increase your knowledge by read Most Beautiful Fabrics in Indonesia, such as  Indonesian Ikat Fabric called Tenun. 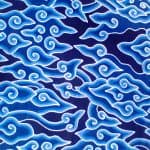 As one of the regions in West Java, Cirebon has its own characteristic especially in batik motif.

The batik motif which comes from Cirebon is named mega mendung, the name is taken based on the pattern which depicts clouds in dark colors such as navy blue, maroon, dark green, etc. Mega means sky or clouds while mendung means the dimming sky before rain happened.

There are 7 color gradations in this motif which depicts 7 layers in sky. Mega mendung motif reflects the patience message, that people should not get mad easily. Sultan Gunung Sari great grandson was the creator of this motif, it is said that mega medung is influenced by Chinese clouds. 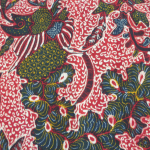 Pekalongan was a strategic place for trading activity with the foreigners therefore people from China, India, and Arab are indirectly influencing the batik motives in Pekalongan. 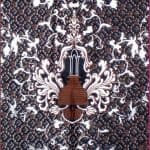 Batik Malang or Batik Malangan is not as popular as the other batik motives in East Java however it is still attractive.

Three main characteristics of batik malangan is: 1) the background is Badut Temple which is located in Malang 2) Malang Monument which is accompanied with lion’s white hair as the symbol of Malang, and 3) the decoration in the side decoration composed of orchid flowers which forming chain pattern.

Beside what I explained above, here i give you information about the real printing techniques in Indonesia. Check this out.

Batik is an important heritage for us to keep. Moreover Indonesian batik has developed and go international.

9 Popular Types of Massages in Indonesia