Natural Landmarks is a natural conservation area that has been established by the government and certainly has an original ecosystem. The protected flora and fauna in the national park are typical Indonesian flora and fauna whose existence is threatened with extinction.

Natural Landmarks are very protected and cared for by the government, so that their appearance is beautiful and certainly worthy of being a tourist spot. Here are the most famous natural landmarks in Indonesia that have been visited by millions of tourists from over the world. 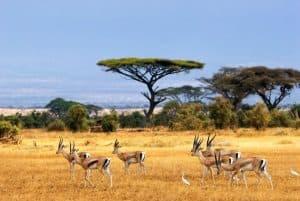 This savanna forest area is included in Baluran National Park conservation, located north of the city of Banyuwangi, East Java. In this savanna forest you can see a herd of bulls in the savanna expanse. Nearly 40 percent of the forest area is dominated by savanna vegetation, and the rest consists of coastal forests, lower mountain forests, swamp forests, seasonal forests and mangrove forests. This forest is also the conservation of some wildlife such as leopards, coyotes, mangrove cats, deer, deer and bulls. This place is also called as the Africa of Indonesia since it seems like in Africa with the large savanna and many animals on it. 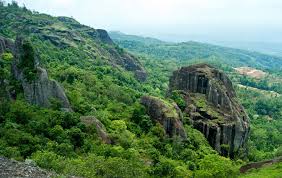 This forest extends from the snow-capped peaks of Mount of Jayawijaya to the coastal waters with mangrove forests and borders the Arafura sea waters. In the central part of this forest, it became a place for birds to live so amazingly like long-tailed birds of paradise, snow quail, cassowary and black elder brother.

This forest also has some uniqueness with the presence of glaciers on the peak of Mount Jaya. In the mountains of Jayawijaya, there are also three large lakes, namely Lake Dyscovery, Larson, and also Lake Hoguyugu. In addition there are about 34 types of vegetation in this forest. Because of the abundance of beauty and wealth that exist in the forest of Lorentz National Park, it is designated as a world natural heritage site by UNESCO and an Asean natural heritage by ASEAN member countries. 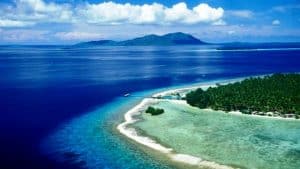 To reach Karimunjawa National Park you can depart from Semarang and from Jepara directly by boat. There you would see a stunning view of Karimun Jawa. Moreover, if you are able to get there while sunset. The scenery will be more beautiful. 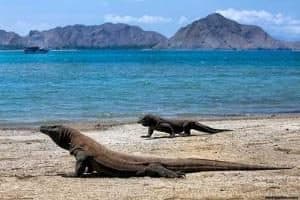 You can come and enjoy the Komodo National Park tourist attractions. Besides nature conservation, this area also offers a unique holiday experience. Located in the Wallacea belt, we can find a unique combination of distinctive flora and fauna. Among the divers, the waters around Komodo, Padar and Rinca are famous for having beautiful diving spots. More than 1000 species of fish, 260 more species of corals, dolphins, whales, and turtles in the Komodo Dragon conservation area. 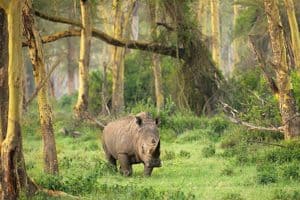 With an area of ​​122,956 Ha, the Ujung Kulon National Park Area is a national park as well as a vast and interesting natural tourist attraction to explore. In the area of ​​Ujung Kulon Tourism Park, you will be spoiled with natural scenery that satisfies the eyes. The nature is maintained, vegetation that grows freely and beautiful beaches make you forget the fatigue of daily activities. In some areas, you can even see wild animals that live freely. 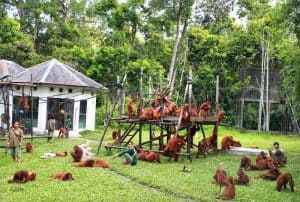 With the status of Tanjung Puting National Park and biosphere reserve, its sustainability can be preserved and is an attraction for one of the tours in Indonesia, in contrast to the orangutan conservation found in other parts of Kalimantan, we see orangutans in man-made habitats. not in Tanjung Puting National Park we can directly see the natural habitat of orangutans directly and see their lives directly in the wild. Here, you will both see the green nature of Borneo and play with the hundreds of orangutan. 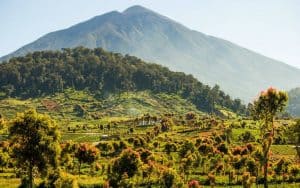 Kerinci Seblat National Park has a very wide area, which is one and a half million hectares spread in four provinces (West Sumatra, Jambi, Bengkulu and South Sumatra). This national park has a variety of topography and presents a variety of natural beauty, such as the valley, mountains, forests and lakes. The area of ​​Kerinci Seblat National Park is one of the most beautiful areas on the island of Sumatra.

Most of these national parks are in the Bukit Barisan mountains, starting from the north near Padang (West Sumatra) to the south to Curup (Bengkulu) and Lubuk Linggau. About 40% of the area of ​​this national park is in the area of ​​Jambi Province. The only access to Kerinci Betiri National Park is to explore Sungai Penuh.

Those are the 7 landmarks that are famous in Indonesia. There will never be a mistake to visit National landmark as your destination. Besides refreshing your minds, you will get so much knowledge on fauna and flora conservation. Moreover, they are already considered as the cultural heritage by UNESCO.

The History of Surfing in Bali