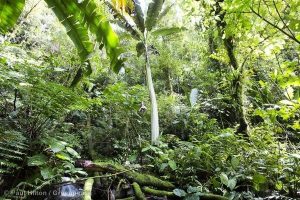 Deforestation is a permanent change from forested areas to non-forested.

Deforestation in two, gross deforestation is a permanent change in natural forest cover without taking into account the growth.

And the second is Deforestation Nett, that is permanent change of forest cover, taking into account the growth again.

While the definition of forest area is a certain area set by the Government to maintain its existence as a permanent forest.

Thus, outside the designated area it is not recognized as a forest area, although it is forested or has good tree cover.

Indonesia has been deforested for 20 years, since 2000. Reduced forest areas are clearly visible on the island of Borneo and the island of Sumatra.

Deforestation in Indonesia is largely a result of a corrupt political and economic system. Systems that regard natural resources, especially forests, as a source of income that can be exploited for political and personal gain.

2. Victims of the New Order

The growth of wood processing and plantation industries in Indonesia has proven to be profitable for many years. The benefits are used by the Soeharto regime as a tool to reward and control their potential friends, family and partners.

Over the last 30 years, Indonesia has dramatically increased production of forest products and plantation products grown on previously forest land.

Today Indonesia is a major producer of logs, sawn timber, plywood, pulp and paper. In addition, there are some plantation products, such as oil palm, rubber and cocoa.

This economic growth is achieved without regard to sustainable forest management or the rights of local people. For now, the causes of deforestation are increasingly complex.

The lack of law enforcement that currently exacerbates forest destruction and has a direct impact on significantly decreasing orangutan habitat.

More than half of Indonesia’s forest area is allocated for timber production under a selective logging system. Many logging companies violate traditional patterns of tenure or land use rights.

Lack of supervision and corporate accountability means monitoring of forest management is very weak. So much of the production forest has been overexploited. Read also Facts about Indonesia rainforest

Industrial timber estates have been promoted on a large scale. Even this program is subsidized as a way to provide wood supplies to the fast growing pulp industry in Indonesia. But it turns out this way to bring pressure on natural forests.

Almost 9 million ha of land, mostly natural forest, has been allocated for the development of industrial timber plantations.

This land may have been cleared or in the near future will be cut down. But only about 2 million ha have been planted, while the remaining 7 million ha into abandoned and unproductive open land.

Soaring plantation development, especially oil palm plantations, is another cause of deforestation. The entrepreneurs apply for permission to build the plantation.

They cut down the forest and use wood as its main product. The wood is for making the pulp, then move again. While the land that has been opened abandoned.

Illegal logging is a direct practice of illegally logging trees in state forest areas. The large scale and organized timber theft is now rampant in Indonesia.

Every year between 50-70 percent of timber supply for the forest products industry is logged illegally.

The total area of forest lost due to illegal logging is unknown. You may see also Impacts of deforestation in Indonesia

The role of small-scale traditional agriculture, compared to other causes of deforestation, is a subject of great controversy.

No accurate estimates are available regarding the area of forest opened by small-scale farmers since 1985. But a reliable estimate in 1990 suggested that shifting cultivators may be responsible for about 20 percent of forest loss.

This data can be translated as land clearing of about 4 million ha between 1985 and 1997.

Transmigration lasted from 1960s to 1999. Transmigration is moving people from densely populated Java Island to other islands. This program is estimated by the Ministry of Forestry to open almost 2 million ha of forest land during the entire period.

In addition, small farmers and opportunistic small-scale investors also contribute to the cause of deforestation. This is because they build plantation land, especially oil palm and cocoa, in forests that are cleared by logging operations and larger-scale plantations.

In addition to avoiding social disturbance and ethnic violence. Reliable estimates of the extent of forest land cleared by migrants on a national scale have never been made.

Deliberate burning by large-scale plantation owners to clear land. Over 5 million ha of forest burned in 1994 and 4.6 million ha of other forests caught fire in 1997-98.

Some of this land grows back into scrub and is partly used by small-scale farmers. But little systematic effort is made to restore forest cover or develop productive agriculture.

In natural conditions, peatlands are not flammable because of their spongy nature. Sponges absorb and retain water to the maximum so that in the rainy season and dry season there is no difference in extreme conditions.

However, if the condition of the peatland is already disturbed, the result is land conversion or canal making. Then the ecological balance will be disturbed. In the dry season, the peatlands will be very dry to a certain depth and flammable.

Peat contains fuel to below the surface. So the fire on peatland spreads below the soil slowly and is difficult to detect.

As well as causing thick smoke. Fire on peatlands is difficult to extinguish so it can last for months. It can only die totally after the intensive rain.

The economic crisis of 1998 affected the types of crops grown by the population and the amount of land utilized.

One of the key findings states that when world market prices fall, small-scale farmers shift activities from export production.

The lack of accurate data and information leads to ineffective spatial planning. This results in overlapping of land use.

As a result, there is a conflict between sectors, such as between the forestry and mining sectors.

The situation is further exacerbated by the weak tenure rules, resulting in unclear status and boundaries of forest areas. Things like this easily trigger conflicts in forest use.

The weakness of forest management in Indonesia is caused by two factors. First, unavailability of data.

Second, accurate status information and forest boundaries. And the third is the limitations of human resources. See also Effect Deforestation in Indonesia

Those are complete explanation about reasons for desforestation in Indonesia. May be useful for you.

13 Most Popular Island in Bali You Have to Visit!