Home » History » The History of Volcanoes in Bali – Eruption Record 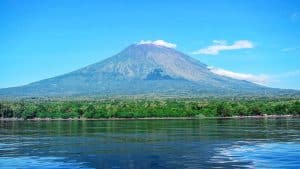 Bali as the part of Indonesia couldn’t be denied that it is also an island with the high risk of volcano eruption. You might feel traumatic with the last eruption of Agung Mountain in Bali in 2017. Although it was not considered as the national disaster, for some people, the eruption was breaking their heart.

There are not much volcanoes in Bali actually, there were just several active volcano you need to be aware since they would possibly erupt suddenly. However, if you read these history of volcanoes in Bali, you will not assume the bad things anymore.

Read also: How Many Volcanoes in Indonesia are Active

In the temple of Supralingga Bhuana, the situation of Bali Dwipa and Seleparang is still silent, as if it was still floating on the wide ocean. Mount Karu in the West, Mount Beratan (Mangu) in the North. So that Bali Dwipa’s situation at that time was still unstable and shaky.

Then after arriving in Bali, the top of the Semeru mountain which is carried by the right hand becomes Gunung Udaya Purwata / Tohlangkir / Gunung Agung. The one taken with the left hand becomes Mount Cala Lingga or later called Mount Batur. These two mountains were later known as Dwi Lingga Giri, which became Parahyangan Purusa Peredana.

Gunung Bumbulan, Gunung Payang, and Gunung Abang become one with Mount Batur Purba whose height reaches 3500 masl. The diameter of the cone that forms one caldera, approximately 29,300 BC, where Mount Abang stands alone with an altitude of approximately 2,152 masl. The second time, about 20,150 BC, where the Mount Payang cone, the Gunung Bumbulan / Writing cone forms the Kintamani undagan.

Mount Batur area is famous as a mainstay tourist attraction of Bangli Regency. It is said that according to the story in the Susana Bali Lontar, Mount Batur is the peak of Mount Mahameru which was moved by Batara Pasupati to be used as Sthana Betari Danuh (Dewi Danu palace). At certain times, all Hindus from various regions in Bali come to Batur to send Suwinih to repel the pest disaster that befell their fields. By delivering this suminih, the mountain area of ​​Batur becomes a fertile area.

Areas that can be highlighted as tourism objects are craters, caldera and lakes. There is a flow of water in the ground which flown the waters of Lake Batur, which appears to be a spring in several places in Bali and is considered as “Tirta Suci”

Cultural tourism found in the area of ​​Mount Batur is Trunyan. Although the entire population of Trunyan is Hindu like most Balinese people, they claim that Hindu Trunyan is the original Hindu heritage of the Majapahit kingdom. To the north of Trunyan is the Kuban, a village cemetery, but the body is not buried or burned, but is placed under a tree after an elaborate death ceremony. This place of burial is filled with bones, and we may find new bodies.

The most frequent erupting mountains in Bali are Mount Agung and Mount Batur. Both mountains have a close bond, namely Mount Agung appears in the “lap” of Mount Batur after erupting thousands of years ago. So it can be said that Mount of Agung is a child of Mount of Batur.

Based on the contents of the lontar of Raja Puranan, Ulun Danu Batur Temple in Batur, the Babad Pati Sora section, explained in the year of Candra Sangkala:

Next, here is the history of Agung Volcano Eruption record based on Scientist record.

Those are the history of volcano in Bali you might need to know. Bali would stay beautiful no matter what, no matter the eruption, as the traveller, you will love Bali as your destination. Even some people abroad are interested to stay in Bali any longer. What’s for? Of course it is because of its beautiful nature that they couldn’t find anywhere else.

Top 8 Beautiful Forest in Indonesia You Deserve to Visit