The forest of Sumatra is among the most biologically habitats on earth and high numbers of unique plants and animals may be found there. Sumatra is the Southeast Asian island that is located on the Equator and becomes a home to some of the world’s most diverse rain forest. This island is the world’s sixth largest island.

Then, due to its tropical climate, thousands of unique species live there. In recent years, massive habitat loss of these animals makes them to the very edge of survival. They are very rare to be seen in their natural habitat. Some of the endangered animals are Sumatran tigers, orangutans, Sumatran elephant, and Sumatran rhinos.

Therefore, through this article we will be focus on endangered Sumatran elephant, as one of Endangered Animals in Indonesia. We will discuss about its characteristic, behavior, and the conservation. We hope that you will understand this animal better after reading this article. 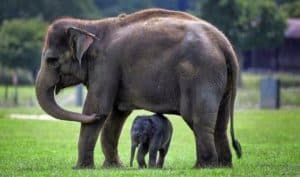 Sumatran elephant, which has a scientific name Elephas maximus sumatranus, is one of three recognized subspecies of the Asian elephant and also native to the Indonesia island of Sumatra.

Unfortunately, the Sumatran elephant’s population in its habitat is only 2,400-2800 and is classified as critically endangered by IUCN (International Union for Conservation of Nature) in 2011.

The population of Sumatran elephant has decreased about 80% over the last 75 years. The main cause of this situation is because this animal is threatened by habitat loss, degradation and fragmentation which makes the forest becomes too small to contain viable elephant populations. If the cause is still continue, it is sad to say that we may not be able to see them again in the near future.

Generally there are two types of elephants in the world; they are Asian elephants and African elephants. Asian elephants are differentiated from African elephants by its smaller body size and highest body point on the head by. They may grow until 5-9 feet at the shoulder with length up to 20 feet and weight approximately 5 tons. This huge body makes them as the largest mammal that live in Indonesia.

The other different between Sumatran elephant that the other elephant are the tip of their trunk has one finger-like process and their back is convex or level. Usually, the female Sumatran elephant is smaller than the males and have short or even no tusks.

The maximum longevity of Sumatran elephant in the wild is around 60 years. Meanwhile, the female captive elephants have survived until 75 years and the male have survived 60 years. The female elephants also stop reproducing after 60 years of age. Birth usually happens at night and lasts approximately 10 seconds.

There are some threats that are believed as the major factors of Sumatran elephant extinction. Those threats are poaching, deforestation, and human-elephant conflict. We will explain more about those threats below. 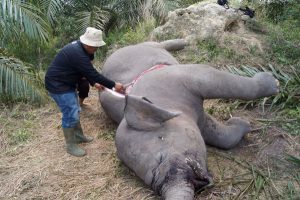 As already explained above, Sumatran elephants typically have smaller tusks than the other elephant’s subspecies. But, poachers still tempt to kill them and sell their tusks on the illegal ivory.

Sumatra Island is one of the areas with the worst deforestation rate in the world and makes elephant’s population decreased faster than the forest. Pulp and paper Industry also oil palm plantation has caused some of deforestation and habitat loss in Sumatra. Over two-thirds of its natural lowland forest have been razed in the past 25 years and have resulted in local extinctions of elephants in many areas.

As the result of deforestation or habitat loss, Sumatran elephants started to come into contact with human settlements further resulted in elephant and human death, damaged of plantation and houses. Sumatran elephant usually eats young oil palm and sometimes they will damage the plantation, therefore people kill them by poisoning and also capture them.

Moreover, hundreds of elephants are dead or loss in all of Riau Province since 2000 as the result of capturing this large animal that is reputed as a pest. 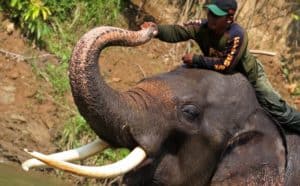 In one day, the elephant consumes about 150 kg of food and 180 liters of water and requires a cruising area up to 20 square kilometers per day.

Seeds of plants in a large mammal’s droppings will spread to the rest of the forest area in its path and help the regeneration of natural forests.

Sumatran elephant also is an ‘Flagship Species’ for its habitats and represent biodiversity in complex ecosystem in where they live.

That is why wildlife conservation is needed to help maintain the biodiversity and ecological integrity of the ecosystem, so that eventually will help to save various other small species.
In order to support the conservation, Sumatra elephant is protected under Indonesia law.

In 2004, there is Tesso Nilo National Park that has been established in Riau Province to protect Sumatran elephant’s habitat. This National Park is one of the largest areas in Sumatra that is large enough to support a viable population of elephants. WWF also started a wildlife patrol unit and also Elephant Flying squad which is made up of rangers, noise and light-making devices, a truck, and four trained elephants that would drive wild elephants back into the forests of they threatened to enter villages.

In addition, some international organizations and its local partners have coordinated wildlife patrol units that conduct anti-poaching patrols, to educate local people on the laws in place concerning poaching. As well as there is a coordination between the government of Indonesia, palm oil company, members of the pulp and paper industry and conservative organizations to work together to conserve Sumatran elephants and their unique habitat.

WWF-Indonesia states that Sumatran elephant’s population is declining every year. In last 25 years, they have lost at least 70% of their habitat and their population has decreased more than a half. The estimated population in 2007 was about 2400-2800 elephants, but it would be also declined rapidly because their habitat is smaller and slaughtering may still continue.

In Sumatra, Riau Province was believed to have the largest elephant population in Sumatra with over 1600 individuals in the 1980s. However, in 2007, the population had decreased almost 84% and only about 210 elephants that remained.

We know that there are some endangered animals in the world, and one of them is Endangered Sumatran Elephant. Through this article we learn that human is the major factor of the extinction. Therefore, we as human must obey to the law and start to love the animals. They are needed to keep the environment balance, and if they are extinct the ecosystem may be unbalance and it will also affect human life.

Sumatran Elephant is one of the native animals in Indonesia. Knowing this endangered Sumatran Elephant makes us know Indonesia more. And if you still want to know more about Indonesia, please stay tune on our blog and we will update more with another story of Indonesia.