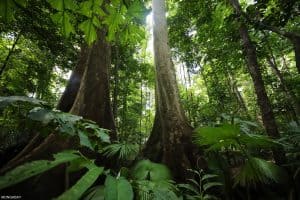 Indonesia is an archipelagic country which is rich with the biodiversity at the forest. Long time a go, more than a half of the land in Indonesia is full with the green beautiful forest.

However, time by time Indonesia changes. It massively build some city and turn the forest into industrial factory that will harm the nature. The endemic animals starts to lose their homes of living.

Some people do illegal logging without any control from the government. Most of that forest problems are caused by human. For further information, you need to see more surprising facts about Indonesian forest below.

Every year, Indonesia loses 684,000 hectares of forests due to illegal logging, forest fires, forest encroachment and forest conversion. According to data released by the World Food and Agriculture Agency (FAO) based on data from the Global Forest Resources Assessment (FRA), Indonesia ranks second highest in the world for forest loss after Brazil is in first place. This condition is certainly very apprehensive. The loss of this forest is almost equivalent to the area of Bali Island. It is estimated that the peak of forest destruction occurred in 1997-2006 which reached about 3.5 million ha per year. Year 2012 decreases to about 300 thousand ha per year.

2. Animal in forest lost their habitat step by step

Wild animals that live freely in the forest continue to lose their habitat. A total of 23 bags of elephant populations in Lampung and Riau have been extinct within 25 years since 1985. Not to mention other animals in the forests of Kalimantan and Papua. As a result, this wildlife compete with humans for food and shelter. Well, if you do not want to seize food with animals, let’s preserve the forest where they live. If you can’t afford to do big things start from small things like saving the use of tissue.

3. Indonesia has the second largest forest in the world

4. Indonesian Forest is the source of microbiology

5. Thousands people in the world suffered ISPA due to forest fire in in Indonesia

In 2015, forest fires in Sumatra and Kalimantan not only reduce forest area but also cause residents of ISPA (upper respiratory infection). For weeks, the smog from these two islands filled the air. Data from Harvard and Columbia University states that people with ARIs due to forest fires in 2015 reached hundreds of thousands of people. About 90 thousand people from Indonesia, while 2200 people from Malaysia, and 6500 Singaporeans. You do not want a victim to fall again in the future. If you have access to people around the forest, explain to them not to open farms / plantations brutally much less by burning the forest.

Indonesia’s Environment Status reports that water quality degradation is caused by the destruction of water catchment areas compounded by the symptoms of climate change. Land degradation causes erosion in a watershed so as to disrupt water supply to support domestic, hydropower, agricultural, and industrial activities. Based on the provisions of Law No. 41 of 1991, in every watershed ecosystem there is a minimum forest area of 30 percent. Many watersheds in Indonesia are no longer in accordance with this provision. Of course you understand, rules are created for our good.

7. 8-10% of paper needs in Indonesia are supplied from Industrial Plantation Forest

It is said 8-10% because the 90-92% is supplied from illegal logging. The use of an A4 paper reel is equivalent to a tree at least 5 years old. Improving economic development that focuses on the exploitation of natural resources with the increase of small added value leads to acceleration of forest destruction. What is needed is to find the optimal area that is rationally environment is still maintained and economic development is running.

8. New species of animal are discovered in Indonesian forest in almost expedition

Almost every expedition to the ecology of tropical forest exploration in Indonesia, it hardy discovered a new species. Even a number of species are endemic, not found elsewhere. Bekantan in Borneo, birds of paradise in Papua, and anoa in Sulawesi are some examples of endemic animals. And the more surprising is, it is easy to extinct for an endemic animal in Indonesia.

9. Indonesian forest store various biodiversity not found in other countries

There are findings of compounds for medicinal raw materials in Indonesian forests that are not owned by other countries. These findings are of high value in the eyes of the world to be the target of the world’s pharmaceutical countries. A scientist admitted the findings could cost 200 million US dollars if it is old. Indonesia’s forests do save a lot of treasure. Do not let them be buried before explored.

10. Indonesian forest is labeled as the lungs of the world

Indonesia is a home to the largest rainforest in the whole of Asia, although Indonesia continues to develop these lands to accommodate its growing population and economic growth. Of the 3,305 known species of amphibians, birds, mammals and reptiles in Indonesia, 31.1 percent are present and 9.9 percent are threatened. Indonesia is home to at least 29,375 species of vascular plants, of which 59.6 percent is still present.

11. Indonesia tropical forest functioned as the lungs of the world

Indonesia as a whole has lost the forest by 40 percent. The degraded forest populations are on average in the prohibition area of forest clearance such as national forests and protected forests, even within areas already protected by Indonesia’s forest moratorium.

Much of this forest damage is ironically done intentionally. Based on the search results of the authorities in the Riau forest fire area, hundreds of hotspots that trigger smoke haze caused by deliberate action by throwing cigarette butts that eventually triggered sparks. Then there is also the wicked doing the burning deliberately but ultimately unable to extinguish, and led to the spread of fire to hundreds or thousands of hectares.

13. Indonesia is considered as the largest contributor of greenhouse gas emissions in the world

Indonesia’s forests are so severe that it has triggered the country’s new international status: the country with the largest greenhouse gas emission contributor, the trigger for the devastating effects of global warming. The big problem of Indonesia’s forests is deforestation. It is an act of economic importance to deforestation by clearing forest. Then, it caused a very bad impact on society, instead of improving the economy of the surrounding community.

Those are the facts of forest in Indonesia. Some facts are pretty terrible that really needs a deep concern for Indonesians. That is why, you should help to safe Indonesian forest by strengthen a campaign of go green. Planting much plantation at your home could be a good idea.