In this special occasion we’re gonna talk about the history of Christian in Indonesia, including the developments. Now, talking about history of Christianity here, the religion believed to be around when the European came to Indonesia, you know when Portuguese and Dutch came here. The catholic one is believed to be carried by the Portuguese when they came to Indonesia for seeking the spices here. Along searching the spices and enslaving people in that time, they also “teach” them something special about their region, the catholic.

Therefore, people then start to learn about it, and then finally made it to be their belief. Meanwhile, the Protestant was spread by Dutch. Before that, the Dutch had a goal to start looking at spices, just like Portuguese. Therefore, they start the searching in some main points in Indonesia especially in the east side of Indonesia, which is very rich of vegetables and spices. Then,people around thought that Protestant was an interesting belief, more than their old belief, Animism. So that’s a little information to open our meeting today. So, let’s go straight to the topic this time.

We’re divide this into some parts to make you more understand about this topic and make it more detail. First, the history about Catholic, and the second is the history of Protestant. However, both of Christianity have been growth well in all over archipelago, especially in east Indonesia.

a. History of Catholic

Like said above, the catholic firstly came to Indonesia when the Portuguese came here looking for spices. But then, another goal of Portuguese that time was spreading the religion. Thanks to the great missionary Fransiscus Xaverios, who spreading it with peace and no conflict at all. So it was a happy time that time, because beside teaching the goodness of Catholic, he also provide some works for the people in the field of missionary.

The “arts” of catholic didn’t stop on church. But they also built some public facilities like hospitals and schools for children. This was indeed making people of Indonesia trusted that Catholic is like perfect and kind religion. So that’s why, many join them. That was the main factor of why Catholic spreading so fast in some regions in Indonesia.

The Catholic spreading started at the east side of Indonesia like Flores and East Timor then spread to the center area relatively fast. But, even though they created some public facilities, those facilities weren’t only for Catholic people, but all the people that lived in there. So anyone can enjoy them, and can take some benefits from it. This loving and caring things of Catholic made many people believed them in past times.

b. History Of Protestant

The spreading of Protestant started at the trading post in some areas in East Indonesia, like Maluku for example. They started spreading them while trading some of the goods they brought especially spices with some golds. At the fist time, the Pastors were working for Deutch, for the religious purpose of government. But then, they do what they always wanted to do, teaching the Indonesian people about their religion, Protestant.

Even though they did it, but the government at that time told them not to teach the Indonesian people anymore, because they will interfere with the activities of trading and economy. But even though the government stricted them, they didn’t care about it. Because in this point, the religion and economy ain’t the same thing. They really different. So, they did it based on that believe. And the Protestant keep on spreading just like that.

However, there’s a conflict here, regarding the VOC rules. Well, we all know that VOC came here for economic purposes, but they created some of rules that related to religion as well. So, in the century of 17, they made a strcit rule about changing the people under their rule to the Protestan belief. Because of that, many people back there was changing their religion from Catholic to Protestant. There are about 50.000 Protestant people back in the days.

Indeed, after Daendels became the highest people in government, he made this free to believe any religion policy. So, people had the right to keep any belief they want. It’s a peaceful time that time, in the area of religion.

Even though the spreading of the beliefs is not done like the way before, but it’s a good thing to look athe the history of the spreading in the old times. One way to do it, is looking for their “heritage” that still exist in some areas in Indonesia. We’re gonna tell you about the heritage in the form of buildings, that they built for spreading the beliefs in the old days.

To prove the theory about the spreading of the belief in Indonesia, luckily they’d left us some of their stuff. But the most noticeable thing is the building. They built them a long time ago to teach the people more deeply about their religion. So, here are some of the building that they’ve built:

1. The Cathedral Church in Jakarta 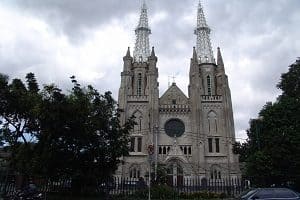 This is indeed the most beautiful one. The church was built in April 21th 1901. From the outside we can look at the beautiful architecture of the twin towers on top of it. Well, we can see and imagine about some of the church in Europe that almost have the same form here and there. But, the beauty doesn’t end there.

The interior looks stunning, with those extraordinary windows created this feeling of solemn. The building took the Neo gothic theme, so it’s really beautiful to watch. The building has some histories about Catholic in Indonesia. 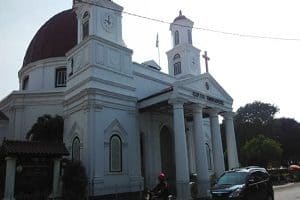 So, the spreading of the beliefs reached the west java area, in Semarang to be specific. So, the building was built by Deutch undoubtedly, because the form of it is the form of typical Deutch building. We can assume that the VOC also involved in this one.

The church also called as the GPIB Imanuel, or Imanuel Church. This is actually the oldest one in central java. Just take a look at it, the building was estimated to be built hundred years ago, exactly at 1753. Another buildings around the church also have this very old architecture.

3. The Kayu Tangan Church in Malang 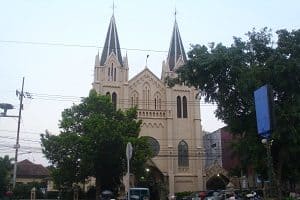 This church resembling the spreading when conquering east java regency, more like the southern part of the regency. The building stands firmly with the beautiful white colour that decorated it in some unique ways. The church’s believed to be built in colonial era, when the Deutsch reached Malang city for the first time.

Not too far from there, maybe just a few meters there’s the Jami Mosque which wa built later. In before, the people keep tolerate each other. Just like now.

Development of Christianity in Indonesia

Well, like we all can see, the ae many people take christian as their belief. Our neighbor, our friend, we can almost find he christianity aspects in our daily life. Even though Islam is a major religion in this country, but they also respect the christian in some ways, like in the Kayu Tangan church for example.

So, maybe the spreading is only do by mouth, by telling someone about christianity. And for the christian kids, they also have an activity called Sunday School in here, so they can learn about christianity more deeply every week.

That’s our meeting for now. The history of christianity is indeed needed to be examine, especially for you who love history and happen to be christian too. That’s it, see you later!

8 Oldest Church in Indonesia Among the Diversity